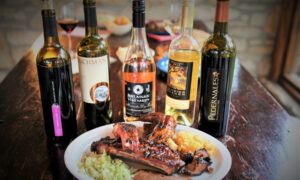 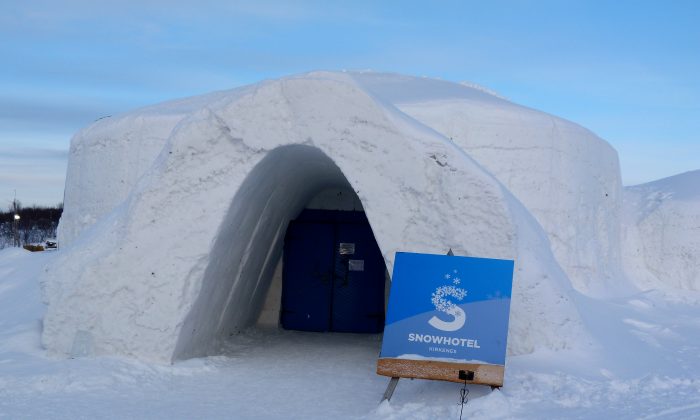 The entrance to the Kirkenes Snow Hotel in Kirkenes, a tiny Arctic town in northeast Norway close to the Russian border. Located in the middle of the auroral zone, it is an ideal destination for experiencing the northern lights. (Manos Angelakis)
Destinations

Norway: A Snow Hotel and the Northern Lights

The night was bitterly cold, the sky crystal clear. Pristine fields of freshly fallen snow radiated in all directions from my silent steps when, all of a sudden, the sky exploded with coloured light!

The light danced across the black blanket of night for several minutes, stopping me in my tracks and shocking me out of my reverie. It was as if the hand of Odin himself had pulled a shimmering curtain of green across the sky while a choir of celestial angels sang Halleluiah.

I stood transfixed, wishing I was not the only one seeing such a magnificent display of the aurora borealis, but at 3:30 a.m., traffic was scarce at the Kirkenes Snow Hotel in Kirkenes, Norway, a resort situated at the top of the world.

Filled with wonder, I returned to wiggle myself back into the slippery sleeping bag that provided scant protection against the icy cold bed I had elected to sleep in that night. I ruminated on Aurora, the goddess of dawn in Roman mythology, and Boreas, the Greek name for the north wind. The simple scientific explanation of magnetic particles entering the earth’s atmosphere does not prepare one for the spectacle of the majestic aurora lighting up the sky. The Cree, one of the largest native groups in North America, aptly called the phenomenon “Dance of the Spirits.”

Norway is a long narrow landmass that hugs the North Sea, and at the top swings over Sweden and Finland while reaching out a finger to touch Russia. At the edge of the Barents Sea surrounded by miles of snow-covered open spaces, Kirkenes is about as far north as you can go, and home to the snow hotel where we were spending the night. The hotel is recreated every November by inflating huge balloons around which snow attaches, and once thick enough the balloons are deflated, leaving a shell of snow.

Two hallways angle off the main room, each housing a series of igloo-shaped bedrooms supposedly to hold in the heat generated by the body. Every year a new artist is invited to decorate the snow walls and beds; this year the artist was from Harbinger, China. Coloured lights are added for illumination and beauty, but provide no warmth. The hotel also has a bar.

The beds have carved niches into which mattresses and pillows are set, and once we snuggled into our insulated sleeping bags we should have had a warm, silent sleep in the constant -4 °C temperature. But of course there is the small matter of the bladder. I tried mind over bladder but bladder won, which was what brought me out of my relatively cozy bed to experience the gift of the lights at 3:30 a.m.

Next to the hotel there is a heated service building with showers, toilets, sauna, and a restaurant, which offers dishes mainly based on Arctic produce. For those daunted at the thought of staying in the snow hotel, there are heated chalet rooms designed like the traditional gamme tents of the Sami people.

Located hundreds of miles above the Arctic Circle, Kirkenes has a lot to offer the mildly adventurous traveller in the winter months. The hotel offers snowmobile tours at night across the moon-lit tundra and husky or reindeer rides during the day, but for me the highlight was the king crab safari.

We were invited to don snowsuits, heavy boots, and mittens over our already toasty all-weather coats, and led to sleds covered with reindeer skins attached to snowmobiles. Excitedly we climbed in—not an easy task in so many layers of clothes. Once packed closely together we bounced over the frozen lake to the pre-selected fishing areas. Getting out of the sleds was even harder than getting in, but laughingly we helped each other while our guides cut large blocks out of the ice and lowered traps to catch the king crabs.

The huge crustaceans were introduced to Norway from Alaska in the 1960’s and they immediately proliferated. Harvesting is strictly controlled to avoid over-fishing and our guides kept only enough crabs to feed our group, returning the balance to their cold watery home.

Did you know king crabs have blue blood? The large critters were quickly dispatched leaving the ice stained blue. Our guides efficiently removed the large tasty legs and gathered the inedible bodies to scatter to scavenging animals. No food goes to waste in the Arctic. Back in our sledges, we were driven to a farmhouse where the legs were cooked in sea water. Huge piles of succulent crab legs were offered over and over again until we were all sated. It was truly a wilderness adventure that left everyone with full bellies and good-natured anticipation of our night soon to be spent in the deep freeze.

After visiting the resident reindeer herd, we met for the evening’s entertainment of watching one of the staff demonstrate how to prepare for bed in the snow hotel. You remove your outer clothes, leaving on your base layer and wool socks. Next you put on a face covering baklava topped by a hat and wrap yourself in a sheet—all the way up and over your head.

Then comes the hard part. You can’t stand up because the wool socks stick to the icy floor, so you must somehow lie on the bed and wiggle into the sleeping bag which I assure you is no easy task. Between laughing and wiggling and trying not to freeze, somehow I got into the bag, and, like a chrysalis, settled down to sleep.

All was relatively well until my bladder woke me up and made it impossible to continue lying there. I wiggled out of my sleeping bag and sheet and quickly got into my now frozen clothes and boots and silently left the hotel for the off-premises facilities. Walking up the path back from the bathroom was when I saw the lights and heard the music of the spheres.

Perhaps the sound given off by celestial bodies was all in my head, but whether it was real or not, I still hear the whish of sound and see the sweeping lights move across the sky—a never-to-be-forgotten experience.Barbara Angelakis is a seasoned international traveller and award-winning writer based in the New York City area. To read more of her articles and adventures visit LuxuryWeb Magazine at www.luxuryweb.com