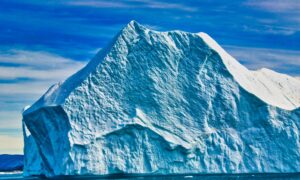 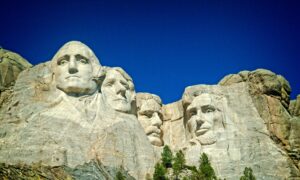 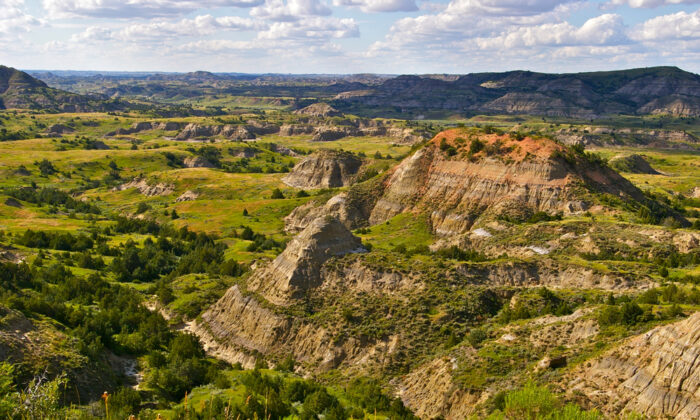 North Dakota: A World of Beauty, Color, and Limitless Space

It’s not normally one of the first places that come to mind when one conjures up an image of an interesting travel destination.

Forget that funny business about humorist Dave Barry’s poking fun at some foolish folks who were pushing the idea of changing the state’s name simply to Dakota, as if doing so would somehow make potential tourists less likely to figure out that the state is located far up north, just under Canada, where, of course, during much of the year the weather is very cold.

The surprising truth is that North Dakota is an unexpectedly interesting travel destination. It has some great scenery, lots of history, and plenty of fun things to see and do.

A good place to begin discovering what’s so nice about it is in Medora, a nearly picture-perfect tiny town in the southwestern part of the state that has the look and feel of the Old West.

Driving to Medora from the east, I was already favorably impressed while witnessing some truly beautiful scenes of tall bright yellow prairie grass against the glow of a late afternoon sun. Then, about seven miles outside town, suddenly there stood Painted Canyon, throwing off a kaleidoscope of colors; instantly, I realized why so many consider the Badlands such a beautiful area.

It was just outside Medora that a future great U.S. president used to ranch. He credited his North Dakota experience for changing him from a sickly, weak young man into a hardy person and strong leader. He even went so far as to say that were it not for his North Dakota days, he never would have become president of the United States.

The Medora area loves him as much as he loved it, and today, many things in and around the town are dedicated to the memory of Theodore Roosevelt.

One is the ruggedly scenic 110-square-mile Theodore Roosevelt National Park; the South Unit entrance is in Medora. Roosevelt’s Maltese Cross Cabin, the original cabin from the first ranch he owned in North Dakota, is located just behind the visitor center and is open for tours. But the real highlight of this section of the park is driving the 36-mile paved scenic loop, where you are certain to see prairie dog colonies up close and hear them chatter, will likely see some buffalo and antelope, and maybe see some wild horses and some elk.

During the day, the shade and sandstone cliffs of the Badlands have a haunting beauty. Roosevelt called it “a desolate, grim beauty.”

As John Steinbeck put it so well in “Travels with Charley”: “The late afternoon changed everything. As the sun angled, the buttes and coulees, the cliffs and sculptured hills and ravines lost their burned and dreadful look and glowed with yellow and rich browns and a hundred variations of red and silver gray, all picked out by streaks of coal black. It was so beautiful that I stopped near a thicket of dwarfed and wind-warped cedars and junipers, and once stopped I was caught, trapped in color and dazzled by the clarity of the light. I can easily see how people are driven back to the Bad Lands.”

I thought of that Steinbeck passage one evening, as I sat at an outdoor picnic table dining on a steak at the Pitchfork Fondue while looking out over the Badlands. Next on my agenda was attending a performance of the famous “Medora Musical” in an adjacent amphitheater. Looking down over the glow coming from the canyons below, I could understand why they named the amphitheater Burning Hills.

Performances are held every evening during the warmer months in the 2,900-seat amphitheater that’s carved into a Badlands canyon. You descend to it via a seven-story escalator.

Medora also offers a number of other Old West town and historic attractions and has a fine professional golf course called Bully Pulpit that’s set against a scenic Badlands backdrop.

Along the Lewis & Clark Trail

The Teddy Roosevelt connection is by no means the state’s only or even main draw for American history buffs. Gen. George Armstrong Custer’s last command post, before he headed off to his death in Montana at Little Bighorn, was at Fort Abraham Lincoln State Park near Bismarck-Mandan. I enjoyed visiting the house he lived in at the fort, but North Dakota is better known as the best place to connect with the Lewis and Clark expedition.

Just north of Bismarck, I visited America’s premier Lewis & Clark attraction, Fort Mandan. It was at Fort Mandan that the Lewis & Clark Corps of Discovery spent more time than anywhere else during their journey, wintering here in the 1804-1805 season and making friends with the area’s Mandan and Hidatsa Indians.

What you see there is a replica of the original fort, which burned down not long after the expedition moved on, and which was actually located at a site about 10 miles away that now lies under the Missouri River.

Looking at this authentic replication of the expedition’s meager facilities and tools and their clothing, and then imagining how they coped with the bitter winter in such conditions, you can understand why Thomas Jefferson used the phrase “undaunted courage” to describe the quality that drove them.

It was here that they met and signed up a remarkable young Indian woman who, with her baby on her back, would accompany them and assist for the rest of their long journey. Her name was Sacagawea. Much myth surrounds her, including the mistaken belief that she “guided” Lewis and Clark to the Pacific. Her name is spelled and pronounced a few different ways—partly because both Lewis and Clark were terrible spellers—and her tribe is sometimes listed as Shoshone and sometimes as Hidatsa.

Most scholars now believe she was born Shoshone in what is now Montana and then later adopted into the Hidatsa tribe, and that the correct pronunciation is Sah-cah-ga-We-ah, not Sack-a-jah-We-a.

Other Lewis and Clark and historic American Indian and American frontier sights I enjoyed visiting include:

The scenery I saw driving through the state was of yellow prairie grass, wide-open spaces with large farms and ranches, and seemingly endless fields of sunflowers (North Dakota has more sunflowers than any other state), as well as vistas of 130-mile-long Lake Sacagawea.

In the state capital of Bismarck, the must-see attraction is the North Dakota Heritage Center, whose collection spans from the age of the dinosaur to the present and houses one of America’s largest collections of Plains Indians artifacts. In front of it stands a large statue of Sacagawea. There are more statues of this young American Indian woman than of any other woman of American history.

While in Bismarck, I experienced what for many is the highlight of a visit to North Dakota–attending an American Indian powwow. They are held throughout the state during the warmer months.

A powwow is an American Indian tradition of coming together to renew old friendships and make new ones, and to sing and dance in a great competition. The sound of the beating drums and the sight of so many performers in traditional outfits make a powwow a moving and very colorful celebration to witness.

The experience is something quite different and very interesting—just like North Dakota, a place Teddy Roosevelt fondly called “a world of beauty and color and limitless space.”

Accommodations:  In Medora, the best place to stay is the Rough Rider Hotel, a favorite place of Rough Rider Teddy Roosevelt.

Guide books: “The Dakotas Off The Beaten Path” is a good choice.