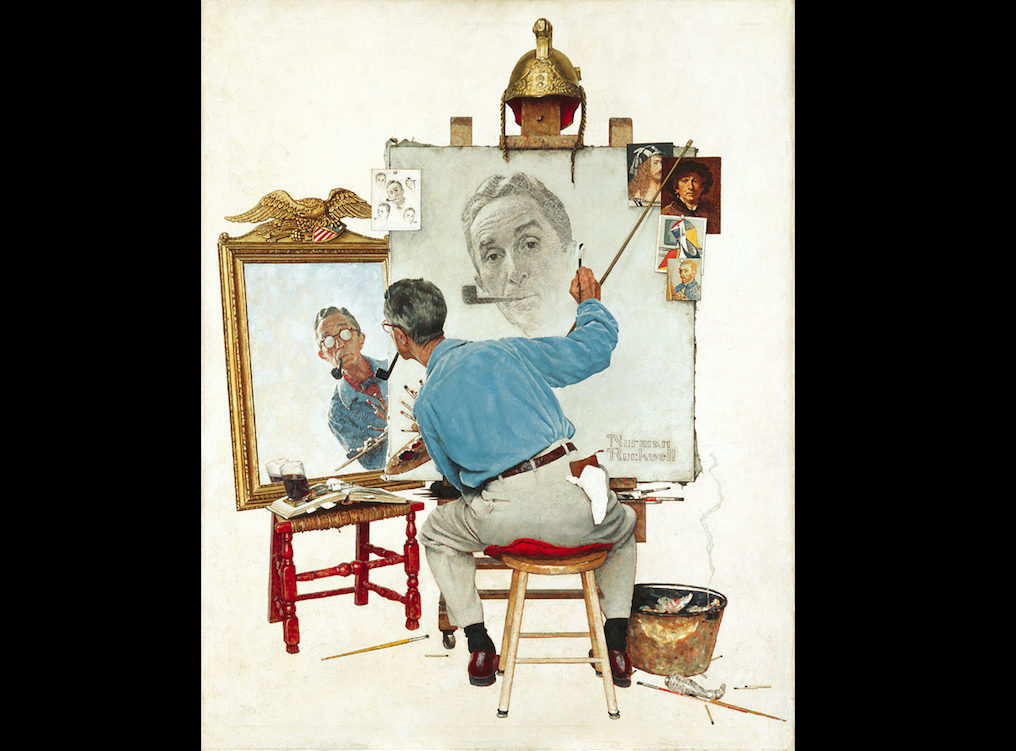 Pictures of Consummate Simplicity From a Tortured Soul

But Rockwellian America doesn’t exist and never has, at least not as purely as Rockwell’s pictures would lead an outsider to believe. His critics have complained that he was out of touch, idealistic, saccharine, a cog in the wartime propaganda machine, a waste of technical talent, what have you.

The Norman Rockwell Museum’s touring retrospective, now at Newark Museum, is not an attempt to determine Rockwell’s place in American art history. Neither is it an exploration of how his personal politics intersected with his art, nor does it shed light on the depression and social alienation he struggled with. It is simply an overview of a lifetime of creative output.

You can expect to see original paintings for Kellogg and Colgate advertisements, as well as a sampling of his later forays into more socially hard-hitting work. To enjoy this exhibit, you must stow your cynicism at the coat check and step into the shoes of a creative with deadlines to meet.

First, you’ve got to appreciate just how much Rockwell worked.

The exhibition begins with 323 Saturday Evening Post covers printed between 1916 and 1963, each one a reproduction of a painstakingly researched oil painting by Rockwell. He worked obsessively day and night, paying increasing attention to the suitability of his models and historical accuracy of the props he used. He sacrificed the health of his person, finances, and family life to perfect his paintings.

As aloof though he was at home (his son Jarvis said “There was a hollowness where the family was supposed to be,” according to biographer Deborah Solomon), Rockwell really knew how to get into the heads of his characters.

The cinematic way in which he directed his models and composed his pictures inspired directors George Lucas and Steven Spielberg, who are known to have admired and collected his work. Before he began to use photos as references, Rockwell was supposed to have paid young models to hold poses for lengthy periods, and he often sifted through numerous possible models before settling on just the right face and build.

He was fiercely faithful to the vision in his head. To erase the gap between commercial demands and his personal preference in subject matter, he employed clever compositional techniques.

“Book of Romance,” painted in 1927 for Ladies’ Home Journal, is a prime example of a frame-within-a-frame composition used to maximum economy. To appeal to the Journal’s readership base, he placed a handsome pair of young lovers in a brightly lit back room of a library. Although the eye goes there initially, an equal focus is put on an eccentric-looking old man, Rockwell’s preferred character type, reading with a magnifying glass in the picture’s foreground.

The bulk of the exhibit consists of original oils, some of which are “pure illustrations” in the sense that they were meant to support a story, and others being stand-alone pieces for magazine covers or posters. The pure illustrations don’t seem as emotionally affecting, but only because the texts they accompany are not included in the exhibit.

A portion of the exhibition deals in depth with the research and planning process Rockwell undertook with “Murder in Mississippi,” 1965, for Look magazine. The painting depicts the 1964 murder of three civil rights workers in Philadelphia, Miss.

Uncharacteristically putting a pause in his multitasking mode of working, he dedicated five weeks exclusively to this project. Rockwell referenced newspaper clippings, photos of models he posed, as well as similar photos from unrelated news reports. Several examples are included.

Though ultimately the magazine went with a preparatory sketch rather than the final painting, “Murder in Mississippi” reveals the immense attentiveness that went into a seemingly straightforward image, and how much of himself Rockwell gave to his work.

American Chronicles: The Art of Norman Rockwell
Feb. 28–May 26