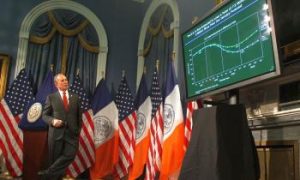 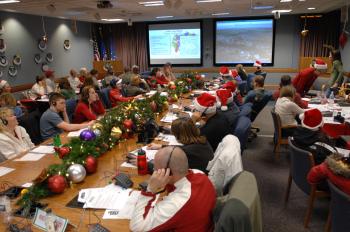 CF-18 Hornets support the air defense of North America, train with Canada's allies, and respond to situations anywhere in the world as part of Canada's commitment and contribution to international peace and security. Every Christmas they have the additional duty of escorting Santa Claus as he flies across Canada delivering presents to children. (Private Pierre Theriault, 3 Wing/CFB Bagotville Imaging Section)
Life & Tradition

By Cindy Chan
biggersmaller
Print
When U.S. Air Force Colonel Harry Shoup answered an unexpected phone call on Christmas Eve 53 years ago, he had no idea it would turn into an annual tradition cherished by millions of children worldwide.

It was 1955, at the height of the Cold War, and the night the call came Colonel Shoup was director of operations in charge of the U.S. air defense radar network. He was keeping watch for Soviet missiles and bombers at the Continental Air Defense Command (CONAD) Operations Center in Colorado Springs, Colorado.

When the operations hotline to the CONAD Commander-in-Chief suddenly rang, Colonel Shoup picked up the phone expecting the caller to be either the Pentagon or his own commander, General Earle Partridge.

It turned out to be a young child asking, “Are you really Santa Claus?”

It emerged later that a Sears Roebuck & Co. advertisement in the Colorado Springs Gazette had misprinted the phone number for children to call Santa. The mistake put children in touch with Colonel Shoup instead.

But all was not lost. The colonel asked his staff to check their radar for signs of a sleigh flying south from the North Pole. Indeed they found Santa and were able to tell the child his location.

CONAD continued the tradition of tracking Santa on Christmas Eve. So did its successor, the North American Air Defense Command (NORAD), the bi-national U.S.-Canadian military organization formed in 1958.

“It was quite exciting . . . I had no idea it would become such a big tradition. It just got bigger every year,” Colonel Shoup said in a recorded interview on the NTS website.

‘When will Santa come to my house?’

The NTS website is activated on December 1 every year. It features North Pole updates and new games and activities daily.

Since the website’s launch in 1998, the NTS program has grown tremendously. In 2007 the site received over 10.6 million visitors from 212 countries and territories, said NTS program manager Major Stacia Reddish in an interview from Denver.

In addition, more than 1,000 “Santa trackers” volunteered on Christmas Eve at the NTS Operations Center at Peterson Air Force Base in Colorado Springs. Last year, they answered nearly 95,000 phone calls and received 140,000 emails from children and families worldwide.

“Most of the children want to know where Santa is. The second most popular question is, ‘when will Santa come to my house?’” said Major Reddish.

“From all of our years of tracking Santa, we do know that he only comes to a home where the children are asleep. So of course the children need to get off the phone or computer for Santa to come to their house.

“It’s a very exciting time. Santa moves very swiftly around the world on Christmas Eve. All the trackers are kept up to date [on Santa’s location] from our radars and satellites so that they can pass that information along to the children.”

From 4 a.m. Mountain Standard Time (MST) on December 24 until 3 a.m. MST on Christmas Day, the website will feature up-to-the-minute reports on Santa’s journey around the world delivering presents.

In addition to radars and satellites, NORAD uses a worldwide network of high-tech cameras to take photos and videos of Santa. Google software will output live images from these “Santa Cams.” The NTS website lets visitors track Santa on a Google map as well as in Google Earth, which shows three-dimensional terrain and buildings.

The website has versions in English, French, German, Italian, Japanese, Spanish, and Chinese. Most of the children who call speak English, but most of the volunteers are military personnel or family members with background in other languages and are able to speak with children in different languages, said Major Reddish.

NORAD links with Canada Post to send mail to Santa

2008 marks the 50th anniversary of the NTS program. It is also the first year NORAD is partnering with Canada Post to help children send emails to Santa, via a link from the NTS website to the Canada Post website.

Spokesperson Nicole Lemire notes that volunteer “postal elves” at Canada Post have been helping Santa respond to mail since 1982. Over the past 26 years, Santa’s North Pole Post Office has answered more than 16 million letters and emails from around the world.

Last year postal elves answered over 1.2 million letters in 27 languages, including Braille. They also replied to 45,000 emails. In 2006 Canada Post was named the Guinness World Record holder for the most letters received and replied to by mail — 1.06 million Santa letters.

Again this year, more than 11,000 current and retired Canada Post employees will serve as postal elves. Santa has been receiving letters since November, said Ms. Lemire, who has been a postal elf herself for 17 years.

Children can also visit www.canadapost.ca/santascorner or www.noradsanta.org to send emails to Santa.

“Please remind children to include their return address when they write to Santa Claus so Santa Claus can write back,” Ms. Lemire said.

Major Reddish reminds children to write by December 23 because after that “Santa can no longer answer his emails because he is getting ready for his big trip around the world.”