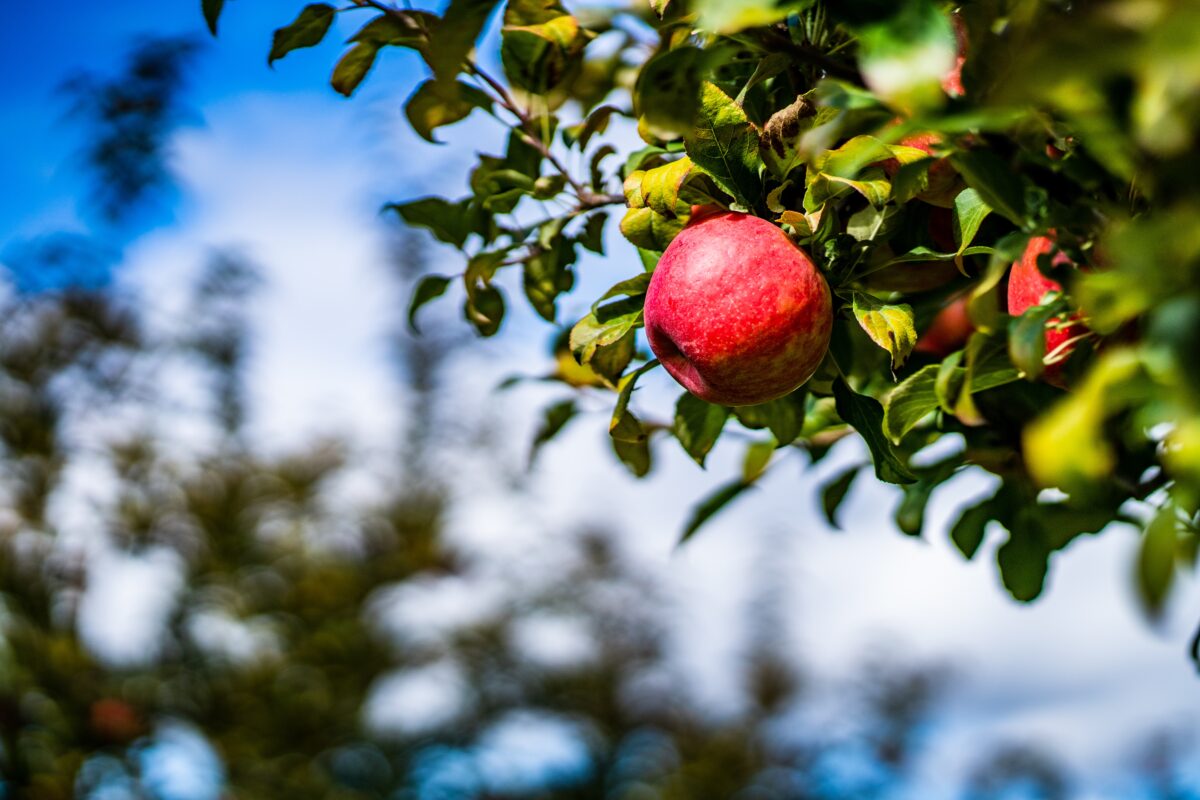 Now in her 80, she has a full head of healthy hair and strong teeth, and she is able to give lectures all over Japan. Wakasugi grows her own vegetables year-round and is against eating inorganic produce grown with chemical fertilizers and pesticides.

She told her audience that if they don’t put organic fruits and vegetables into the refrigerator, even after they become dry and turn yellow, they will not easily decay. However, even if they put produce grown with chemical fertilizers into the refrigerator, it will take only a few days for them to start rotting. These fruits and vegetables not only have extremely weak vitality, but they also have extremely low nutrients. Furthermore, they may also contain pesticide toxins. Thus, even if you think you’re eating a healthy diet rich in fruits and vegetables, your food may be putting you at risk of cancer and other diseases.

Akinori Kimura has grown a special type of miracle apple, which doesn’t decay.

Since 1978, he has been experimenting with the natural apple cultivation method, with “no pesticides or chemical fertilizers.” It was not until eight years later that he saw the first results.

The apples he grew would not rot even two years after they were cut open, regardless where they were stored. These apples’ amazing vitality and deliciousness caused a sensation around the world. The United Nations even named his farming method after him.

From his story, we can see that organic food is a heavenly treasure, which signifies health and strong vitality.

People may not be able to imagine that apples generally need more than ten rounds of pesticide sprays in order to ripen.

Without the use of fertilizers or pesticides, it’s impossible for them to survive, let alone blossoming and yielding fruits. Eating such apples, who can imagine what changes will happen to our body? If we eat only vegetables grown with pesticides and chemical fertilizers without any precautions for a decade or several decades, will they cause cancer?

Then, why do we still plant apples this way? It is said that once we switch farming methods to incorporate chemical fertilizers and pesticides, it is difficult to go back to the original methods of farming.

Without chemical fertilizers or pesticides, it now becomes difficult for these crops to continue to survive, as they have lost their original immunity and vitality.

Since mother nature’s ecological food chain is broken, there are no more birds or insects to eat certain pests, which will now gnaw away vegetables and leaves. As people have destroyed our very orderly natural environment, we can rely on only pesticides to kill the pests nowadays.

In fact, many people have tried to grow apples naturally. Nevertheless, usually after four or five years, they all quit, because no one could persist with no income or no foreseeable hope.

Only Kimura, whose family ended up selling all their belongings, would not give up. He insisted on finding natural ecological methods to improve the soil quality, until the eighth year, when seven flowers blossomed.

And in the ninth year, his orchard was full of flowers and fruits, and his apple trees had become capable of healing themselves with a strong immune system.

This is how Kimura’s natural orchard was described in a news report:

“When people come to Kimura’s orchard, they see locusts hopping around, bees dancing, frogs singing at the top of their lungs, and rats and rabbits running around. They have to push away the weeds with their hands to get to the apple trees.

Why is this place in such a state? This is because without the use of pesticides, the ecosystem here has been restored to its original state. Since 1978, Kimura has not used a single drop of pesticide or a pinch of chemical fertilizer in this 8,800-square-meter orchard.”

That’s why he has grown apples that are full of happiness and don’t rot for two years.

“Usually, after an apple is cut open and left for a while, it soon turns brown and starts to rot. However, Kimura’s apples were cut in half and left for two years without rotting, only to shrink and become increasingly small as they withered. And they eventually turned into dried fruits with a light red color and a sweet aroma.”

Many people are shocked when they read this story, to find out that organic food is a wonderful medicine for us to have a long and healthy life, able to give us strong vitality and fundamentally fend off diseases for us. The inorganic vegetables that we eat on a daily basis are actually so harmful that they should not be something that we eat in the first place. It turns out that the ancients did not even need refrigerators.

People in their 40s and 50s probably all have an indescribable feeling that although their lives have become very convenient due to modern technological advancement, the natural taste of fruits and vegetables can no longer be found.

Many food items have become tasteless, and vegetables are bitter nowadays. Furthermore, people’s immunity is getting increasingly weak, with various modern diseases that require constant medication. Also, no matter how hard they try to prevent and control diseases, to exercise and to eat a lot of vegetables, cancers and other horrible diseases will still come knocking on their door.

Children nowadays also don’t like to eat vegetables. In order to make vegetables delicious, so their children eat more vegetables, mothers need to rack their brains when cooking. However, no matter how diligent they are at learning different recipes, they still cannot fundamentally change their children’s dietary habits. Despite knowing that too much consumption of junk foods is harmful, children love eating processed meat and snacks and drinking soft drinks. When the seasonal flu comes, their immune systems cannot defend against it.

Everyone is at their wits’ end, not realizing that the root cause is related to the inorganic fruits and vegetables that we consume. Children do not know the taste that fruits and vegetables should have, so their intake of nutrients from them is insufficient. As their bodies are not satisfied, they will look for snacks to fill this void. The more unhealthy food they eat, the worse their body gets, and the more snacks they want to eat, thus forming a vicious cycle.

In the modern health scare, no one has ever come to tell us that the taste of fruits and vegetables has changed, which means that they are no longer something that people should eat. They have instead become things that have no nutrients and contain toxins. If it were not for Kimura, who had grown a miracle, people might still be in a state of helplessness.

Ms. Bai, a lady residing in Japan, once met an 86-year-old grandmother who gave her some organic vegetables grown in her own fields. Although these vegetables were not good-looking, they were very weighty, with thick leaves. Ms. Bai brought them home and simply stir-fried them with oil and salt.

Surprisingly, her son, who had never enjoyed eating vegetables, actually ate them with great pleasure and asked his mom with a puzzled expression why he had never eaten such fresh and delicious vegetables before.

Like many people, Ms. Bai was not aware of the importance of organic fruits and vegetables, which are twice more expensive than inorganic ones. The average family simply does not take this seriously, as they don’t understand how harmful inorganic food is.

Both children’s health also improved significantly. In the past, whenever it was the flu season, they would have a fever and rest at home. Nowadays, come flu season, they are as healthy as usual. This signifies that eating organic fruits and vegetables with vitality will give our body a strong immune system.