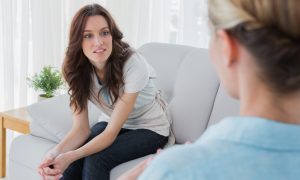 Orphans and other vulnerable children in developing countries respond dramatically well to talk therapy, even when the therapists have little formal training.

The findings suggest that young people from poor nations—including some who experience trauma such as sexual or domestic abuse—can benefit from mental health treatment although health professionals are not available to provide it.

“We found that children from very distressed backgrounds can really be helped by a prescribed set of sessions with trained lay workers who otherwise have absolutely no mental health education and barely a high school education,” says Laura K. Murray, associate scientist in mental health at the Johns Hopkins University’s Bloomberg School of Public Health.

“This study demonstrates that evidence-based treatments can be done in low-resource countries with good outcomes.”

Failure to treat childhood trauma can lead to skills deficits and unhealthy decision-making as adults. It can also result in bad long-term health outcomes and lower economic productivity.

“We need to make these interventions available to children so they aren’t set up for significant difficulties as adults,” Murray says.

For a new study published in JAMA Pediatrics, researchers brought a program called Trauma-Focused Cognitive Behavioral Therapy, a form of talk therapy, to vulnerable children between ages 5 and 18 in Lusaka, Zambia.

Roughly half of 257 children were randomly chosen for therapy, while the other half received the “usual” treatment commonly given to orphans or vulnerable children in poor countries. The usual treatment varied, but often included such things as soccer, support groups, education, nutrition, and HIV-related services such as voluntary counseling and testing.

Talk therapy consisted of between eight and 12 one-hour sessions, conducted by workers who had no prior formal training in counseling but who received some ongoing training and supervision by the research team.

Children had time to get to know the lay counselors and were taught how to relax, how to talk about their feelings, and how they could choose to think about their circumstances.

They were walked through their traumatic experiences in detail to clear out the stories causing them nightmares. They learned how to think about the trauma in different ways and to see that it was not their fault.

They also worked with counselors to plan how to avoid violent situations in the future in very specific ways. For example, detailed safety plans were developed with the children to avoid violence at home or in the community, such as going to a neighboring “auntie’s” house for the night when they sensed trouble brewing.

Those undergoing therapy saw their trauma symptom scores—measures of sleep problems, feelings of sadness, or the ability to talk about issues—fall by nearly 82 percent, on average, while those in the treatment-as-usual group had a reduction in their scores of just 21 percent.

The study did not follow the children after treatment to see if the positive effect endured. But studies of child trauma in poor US populations have found that Trauma-Focused Cognitive Behavioral Therapy has sustained benefits at least six months to two years after treatment.

The program in Zambia should be generalizable to other sub-Saharan African nations, Murray says.

The new study did not compare cost-effectiveness of the two types of treatment, but the findings raise the question of whether dollars are being spent in the most effective way to help orphans and vulnerable children.

“The United States spends billions in poor countries on programs for orphaned children and others who have experienced trauma, but the programs are often more social in nature and have not shown effectiveness in treating the mental health effects of trauma,” Murray says.

“Our research suggests that treatments like the one we studied in Zambia may be able to provide better care for children with trauma-related mental health problems.”

Other researchers from Johns Hopkins, and from the Zambian Ministry of Health, the University of Washington, Allegheny General Hospital, Columbia University, and the University of Zambia contributed to the study. The USAID Displaced Children’s and Orphans Fund supported the work.