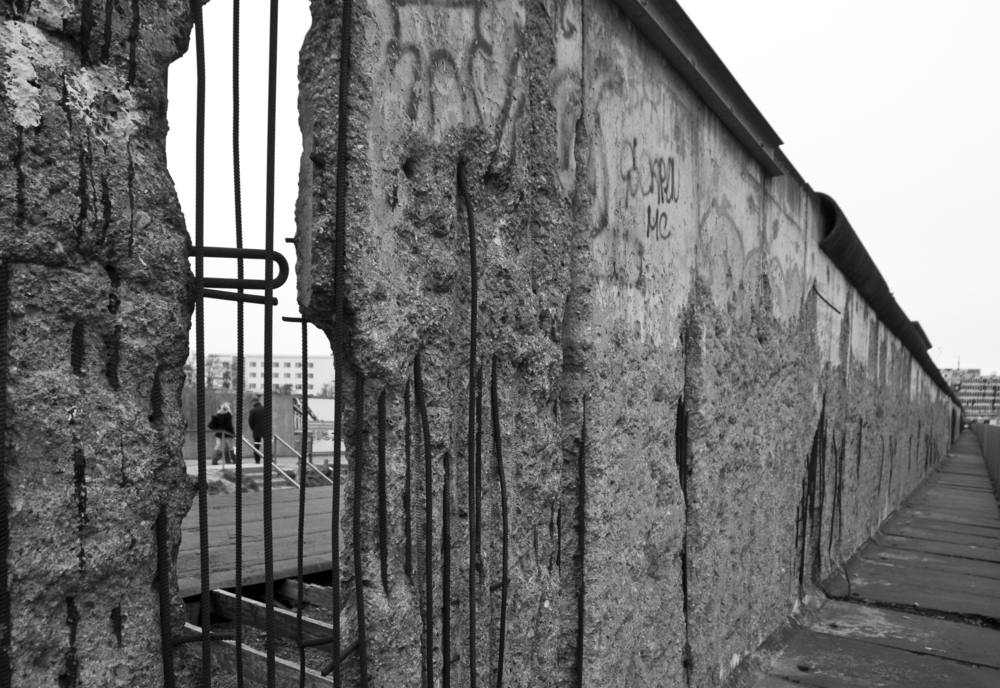 It has been 25 years since the Berlin Wall fell, but the Berlin East-West divide is still very much in evidence.

The 9 November 1989 was an incredible moment in history. It was the day when the Berlin Wall was demolished instantly uniting East and West Berlin. Yet Berlin, Europe’s unlikely party hot spot, is still a city of two distinct sides.

The architecture in the East may be a little grungy, but a warehouse doubles beautifully as a bar and a disused factory is perfect as a disco.

In the West, it’s more about elegance. Trendy youth live and work in the East, but migrate to the West once they reach 30(ish) to bring up their kids.

Each side has its own shopping, restaurant and bar districts. In fact, Berlin has two of everything – even two cultures and this is what makes Berlin an outstanding cultural city break.

East Berlin at night is for partying and house rythms play on to the wee hours. The latest hotspot is the PrenzlauerBerg, a neighbourhood so charmingly scruffy you may have to ruffle your hair to fit in. Around here, people are clad in trendy understated garb, tease their hair into modern ‘just got out of bed’ styles and drink German beer in transient bars which have a habit of popping up and disasappearing again before you can say Ich Bin Ein Berliner.

You have to either be guided by someone in the know or make like a detective and hope you stumble upon them in hidden courtyards or around the next corner. You may even find yourself dancing with a thousand others in an ugly, concrete disused power house, where at 6am the atmosphere is still electric!

West Berlin, on the other hand, is home to the most stylish shopping especially around Ku’damm. Seek out KaDeWe for Berlin’s answer to Harrods. Life and architecture is more gentrified – there are no transient bars in this part of town. But this is where Germany’s squirm-worthy past is acknowledged and memorialised with ingenious creativity and a huge dollop of sensitivity.

The open-air Memorial to the Murdered Jews of Europe near the Reichstag is unmissable – literally. Designed by Peter Eisenman, it comprises 2,711 grey concrete blocks of different heights placed in a grid of nearly 19,000m2 of undulating ground cleverly designed to create the illusion of motion.

And perpetual motion should be on your agenda in this delightfully schizophrenic city so a bus tour is highly recommended. It may sound cheesy, but the hop-on-hop-off buss tour is excellent and ideal if you don’t have much time. Headphones explain the sights in the language you choose and twenty stops means you have a fantastic choice of what to see.

It takes the bus two hours to get all the way through the tour and you can stay on as long as you like. The bus operates between 9:45am and 5pm (3pm in winter) and you won’t have to wait longer than 15 minutes to hop back on. Cost €17 with Isango and is included with The Berlin Pass (costing €79 for 2 days and includes free entry to over 50 museums & attractions, as well as hop-on-hop-off bus and Berlin public transport).

If your visit is a short one, try to fit in the Brandenburger Tor and Check-point Charlie. The Brandenburger Tor also known as the Brandenburg Gate – at Pariser Platz, is considered an iconic symbol of Berlin. It was once one of several through which you could enter Berlin and is now the only one remaining gete. Based on the Acropolis in Athens it comprises twelve Greek Doric columns and is topped with Quadriga, goddess of peace, triumphantly driving a four-horse chariot.

Checkpoint Charlie is a permanent open-air exhibit at the former American controlled check-point between the East West divide. You can buy a ‘visa’ as you pass through or have your picture taken with a GI before you pop into the Checkpoint Charlie Museum and gasp at the ingenuity used by to escape ‘city arrest’ in East Berlin. As for the wall, it seems there is no spare wall left for souvenirs yet the tourist shops still sell parts of it for around 15 euros each.

Going out to eat on Sunday morning is so popular that entire areas are dedicated to serving breakfast. In the West, head for the Savignyplatz region. In the East, go to Boxhagenerstrasse. This neighbourhood also hosts a flea market so you can indulge in some after breakfast shopping. The first tuck of the day is usually fresh baked rolls, boiled egg, marmalade, Nutella (Germans love it), pork sausage, cheese and lashings of coffee.

Or head for the Television Tower at 1a Panoramastrasse. The lift swiftly climbs the 207m to the Telecafe, where you can order muesli or champagne with scrambled eggs and smoked salmon and look out onto the whole of Berlin and wonder at its amazing revival. You can pre-order lunch at the Sphere restaurant with Isango (cost €48) and, during your 1 hour seating the restaurant will make 1 complete rotation ensuing you see Berlin from every angle without having to move.

Where to Eat, Drink and Dance

Dinner is really chilled at Splinder and Klatt out east on the River Spree. It’s a converted riverside restaurant seating several hundred with a DJ spinning some tunes – it’s a lot more relaxing than it might sound because you get lay on a comfy mattress. You can loll about on a bed pretending you’re Emperor Nero as your food is prepared. And at about £12 a main course you won’t pay through the nose for the privilege.

Need a pick-me-up? The chocolate indulgence at Fassbender & Rausch Chocolatiers, at Gendarmenmarkt might be just what you need. The cafe is in the most beautiful square in Berlin and is well known for a range of chocolates (including a fine replicas of the Reichstag), and its hot chocolate drinks.

*Image of Berlin Wall via Shutterstock