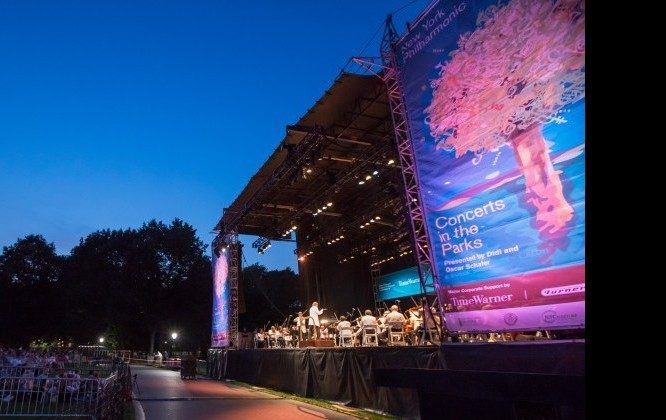 Tchaikovsky’s Violin Concerto in D major, Op. 35, began with its usual air of mystery. The dramatic crescendo moves the audience to yearn for the entrance of the anticipated violin solo. But there is an unexpected twist to this familiar piece.

James Ehnes, an award-winning Canadian violinist, plays at a speed much faster than what the orchestra started with. Listeners hold their breath and wonder what he will do when the Allegro comes.

To the crowd’s astonishment, Ehnes’s Allegro is an explosion of clear and concise notes. But he continues to play even faster.

Some 16 notes become blurred; listeners begin to realize his intonation is sliding—but it is a very hot evening and we are getting a free New York Philharmonic concert.

Ehnes is a remarkable violinist nonetheless. He began playing at age four, and became a protégé of the noted Canadian violinist Francis Chaplin by age nine. Ehnes attended The Juilliard School, where he won the Peter Mennin Prize for Outstanding Achievement and Leadership in Music.

He currently plays the “Marsick” Stradivarius violin of 1715, and it shows. His tone is sturdy and bright, which resonated across the Great Lawn.

Andrey Boreyko, music director of the Düsseldorf Symphony Orchestra, was the conductor for the evening. He has previously conducted for the Berlin, Los Angeles, and New York Philharmonic Orchestras.

The orchestra performed Prelude to Act I of Mastersingers of Nuremberg by Richard Wagner. The plot of the opera revolves around a guild of Master Singers, who are basically a group of amateur middle class poets and musicians.

Despite playing outside of the luminous amphitheater of the Lincoln Center, the New York Philharmonic Orchestra still captured the grandeur and dignity of the guild.

The program also included all three movements of Tchaikovsky Violin Concerto. The second movement was played at a fast pace—though the more speed the violin gained, the more feeling it lost. Nonetheless, considering the difficulty of the piece and the conditions it was played under, the overall effect was magnificent.

Tchaikovsky originally dedicated the complicated piece to Leopold Auer, St. Petersburg Conservatory’s head of the violin department. Not only did Aur reject the piece as “impossible to play,” but a critic described the delayed premier as music that “stinks to the ear…and beats the violin black and blue.”

Today, however, the Tchaikovsky Violin Concertos are required for many violin repertoires. It is no longer the piece that is “impossible to play,” but the piece that Aur could not play. The intrinsic feeling of triumph was not only written in the piece, but contrived by its history. And the New York Philharmonic Orchestra captured that triumph wonderfully.

Talent follows with high expectations. Brahms was constantly compared to Beethoven throughout his career. He has been quoted saying “I shall never write a symphony! You have no idea what it’s like to hear the footsteps of a giant like that [Beethoven] behind you.”

Brahms worked on Symphony No.1 on and off for years. The piece received accolades when it was finally completed, another story of triumph.

The third movement has a crescendo followed by grand a silence. The crescendo was so rich with feeling that listeners were on the edge of their picnic blankets waiting for the next note.

Although the lawn concerts are not up to par with New York Philharmonic’s usual standards, the pieces were still beautifully performed. The orchestra tactfully adjusted to each other’s changing intonations, and smoothly kept up with the soloists’ changing speed. The event was all the while worth going to; it was a night of not only beautiful music, but music that left listeners with a lesson on triumph under any circumstances.