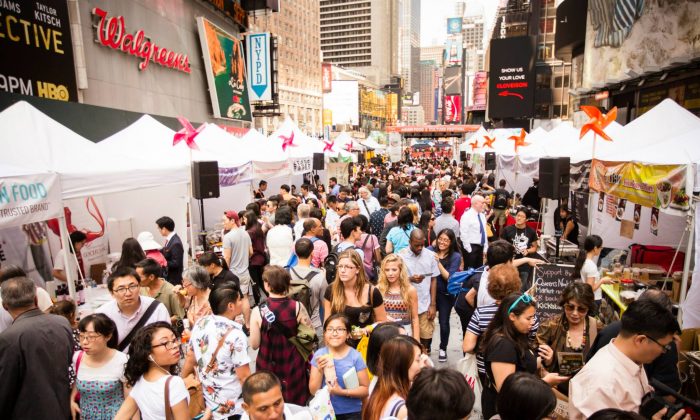 NEW YORK—Asian cuisine is finally getting its moment in the spotlight. From kimchi to sriracha sauce, famous chefs are incorporating Asian flavors and ingredients into their dishes. Food lovers are now hungry for Asian dishes that were once only eaten by immigrants.

On June 26, the best of New York City’s Asian culinary scene came together at Taste Asia Asian Food Fest, a food and cultural festival hosted by Epoch Times and its sister media company, New Tang Dynasty Television. Now in its second year, the festival at Times Square on June 26 and 27, features cultural performances, cooking demonstrations by master chefs, and a Chinese cuisine cooking competition featuring contestants from around the world.

About 15,000 votes came through during the voting period from June 1 to 20, according to Seth Holehouse, the contest’s director.

Andrew Ding, owner of the Best Chinese Restaurant, The Handpulled Noodle located in Harlem, was shocked that his several-months-old noodle shop bested other, more well-established Chinese restaurants in the city. He attributes the result to his devoted staff who made sure to spread the word about the contest.

“I’m a little scared by it [the award], to be honest,” Ding said, who opened his restaurant in February. “There are so great restaurants in New York. We’re obviously very honored.”

Ding was born in Xinjiang, China, a city in the country’s northwestern region that borrows culinary flavors from its neighbors in Central Asia.

“I grew up with this really, really, wholesome, rustic, flavor-filled food. When I came to New York, I was very disappointed that I couldn’t find it. I really felt that there was a void,” Ding said.

So four and a half years ago, he quit his career as a classical violist to pursue his love for cooking.

Ding’s restaurant specializes in food from his hometown, such as cumin lamb sliders and “ding ding” noodles, a type of chopped noodle that he says can’t be found anywhere else on the East Coast.

Ding hopes more Asian restaurants can focus on regional cuisines and excelling at cooking a particular type of food, instead of “feeling as if they have to offer everything on their menu.”

“I feel the New York diner is sophisticated enough to appreciate differences [in cuisines],” Ding said.

“You get the taste of sweet, sour, spice: everything in one taste. It literally lifts up your tastebuds.”

He is hopeful that Sri Lankan cuisine will one day become popular with a broader audience, as many of the spices and ingredients have nutritional benefits fit for health-conscious New Yorkers.

Perhaps it wasn’t a surprise that the popular Spot Dessert Bar won Best Dessert Menu. Its specialty is serving classical Western desserts with an Asian flair, such as its signature Chocolate Green Tea Lava Cake, served with green tea ganache and a scoop of green tea ice cream.

All the dishes are created by Ian Kittichai, a top chef in Thailand. His travels around the world inspire creative takes on Western desserts, using Asian ingredients like Japanese yuzu (a citrus fruit), Thai tea, and condensed milk.

Managing partner, Mark Lee said participating in Taste Asia allows Spot to share in the diverse tastes spread throughout Asian countries. He added that Spot is hoping to expand beyond its Manhattan locations to other U.S. states and eventually to Asia.