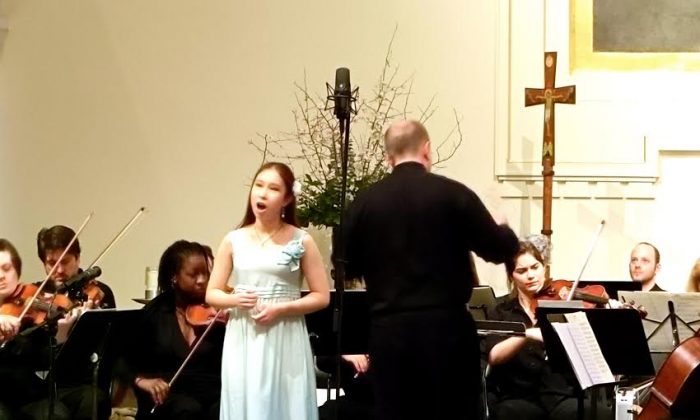 NEW YORK—Three violinists and two singers shone brightly in a pair of concerts presented by the New York Concerti Sinfonietta on March 2 and 3. The programs also featured two accomplished pianists and an expert flutist.

The concerts took place in two historic churches known for their superior acoustics: the Church of the Holy Apostles (Chelsea), and the Church of St. Joseph in Greenwich Village.

The competitions are open to musicians of all ages, which afforded us an occasion to hear two exceptional child prodigies on the same evening; one a violinist, the other a pianist.

Dr. Julie Jordan, who is founder and artistic director of the New York Concerti Sinfonietta and its International Competitions, has been a member of the piano faculty of The Juilliard School Evening Division for the past 28 years.

Three Violinists
The March 2 concert afforded the unusual opportunity of hearing portions of three different violin concertos on a single program. All three violinists are enrolled in the Manhattan School of Music Precollege Division as students of Elizabeth Faidley.

Satirist Ambrose Bierce sarcastically defined the violin as “an instrument to tickle the human ears by friction of a horse’s tail on the entrails of a cat.” But anyone hearing the works of Lalo, Mendelssohn, and Sibelius so convincingly played on March 2 would dismiss such a curmudgeonly view.

Despite its title, Lalo’s “Symphonie Espagnole” is not a symphony but a five-movement concerto for violin and orchestra. Lalo, like other French composers of his generation, shared a fascination for the passionate, dance-like music of his country’s southern neighbor: witness Ravel’s “Rapsodie Espagnole,” Chabrier’s “España,” Debussy’s “Ibéria,” and Bizet’s Carmen.

Kirjner’s performance was both forceful and sensuous, vividly conveying the vigorous, stamping, flamenco-inspired opening motive and the subsequent sinuous melodies. It was a striking, highly individual interpretation. The rapid passages were played with Gypsy-like abandon, while the contemplative, reflective passages were beautifully shaped and inflected. Occasionally, however, Kirjner’s vehemence affected the accuracy of his intonation.

Kirjner’s committed performance made me curious to hear Lalo’s other nationalistic works for violin and orchestra, the “Russian Concerto” and “Norwegian Fantasie,” both of which have been largely forgotten.

The Mendelssohn Concerto
Sarah Ma, only 11 years old, is the recipient of the New York Concerti Sinfonietta’s special Young Artist Award. Seeing her diminutive stature, I expected, at best, a competent child. I could not have been more wrong.

Sarah is a true prodigy. She has been playing the violin since age 6; the past two years at the Manhattan School of Music. It is amazing that she has reached this level of technical proficiency and musicality after only five years of study. Her performance of the finale of the Mendelssohn Violin Concerto was exhilarating and genuinely thrilling.

Sarah played with a radiant innocence at a ferocious clip that an adult would be hard-pressed to match, but never sounded rushed. Her performance was buoyant and ebullient, with Mendelssohnian effervescence and a tasteful balance between the music’s classic and romantic elements. Her phrasing was unerring. Conductor Paul Hostetter and the orchestra provided stalwart support.

Sarah has fleet fingers, a rich tone, and a warm vibrato. Her incisive bow control is very advanced. Her command of up-bow staccato defies belief.

I found her inspiring playing and interpretation to be extraordinary for her age; indeed, for a violinist of any age. It was a tantalizing glimpse of potential future greatness.

The Sibelius Concerto is one of the most technically challenging works of its kind in the repertory. In his March 2 performance, Yom did a wholly admirable job of navigating the Sibelius Concerto’s pitfalls. The concerto is a daunting amalgam of fire and ice. Its finale has been described as “a polonaise for polar bears.”

Yom had interpretative ideas, and the technical security to bring them off. Whether playing pulsating melodies in the lowest region of the G string, or high-flying octaves at the top of the violin’s compass, his intonation was commendable, displaying full mastery of his instrument. His unaccompanied cadenza held the audience’s rapt attention; not a cough could be heard.

In a few years, he will likely plumb the emotional depths of this moody, atmospheric work still more deeply.

Arberas is the winner of the Vocal Artist Award in the New York Concerti Sinfonietta’s 2014 Shining Stars International Debut Competition.

She has a well-supported voice of operatic size. Her pitch is reliable, her diction precise. Her breath control and attention to dynamic nuance is notable. Her tone has body and is womanly, with a distinctive, warm but gleaming timbre. Her articulation of florid passages is exemplary. She is a communicative singer with a flair for comedy.

Arberas’ ravishing Handel aria was quite beautiful; very slow, lyrical, and legato, concluding with exuberant ornamentation. In the Rossini, Arberas let loose. Her deftly characterized aria was a comic delight. Acting the part of Rossini’s Rosina with coy gestures and expressions, Arberas had the audience laughing out loud.

Her coloratura exhibited flawless pitch. She had powerful high notes; her voice sounded huge in the church’s resonant acoustics. Arberas may be well on her way to a significant singing career. She is clearly one to watch.

Soprano Gwyneth Campbell’s appearance on March 3 was in the nature of a birthday celebration; she had just turned 15 the day before. She sang a captivating group of five arias, charming the audience in the process. These comprised the tender “Bist du bei mir” (misattributed to J. S. Bach but actually composed by Gottfried Stölzel); Handel’s joyous and florid “O Had I Jubal’s Lyre” from the oratorio Joshua; and three Mozart arias.

Gwyneth, who began piano lessons at the age of 2, started vocal studies at age 12 with Lorraine Nubar of the Juilliard Pre-College Vocal Division. Gwyneth has an agile voice of modest size, with a light vibrato. Her sound is not operatic in the conventional sense, but is achingly pure and almost childlike. Her solidity of pitch, ability to shape a phrase, accurate coloratura, and secure top register are unusual for her age. Her voice should continue to grow as she matures.

A Pair of Pianists
Elliot Kim, another diminutive and talented 11-year-old prodigy, began piano instruction at the age of 5 in Denver. He currently studies with Dr. Joanne Polk at the Manhattan School of Music Precollege Division, and is First Prize winner of the New York Concerti Sinfonietta’s International Shining Stars Concerto Competition, Precollege Piano Division.

Russian composer Dmitri Kabalevsky is sometimes belittled as the “poor man’s Shostakovich”; his work lacks the musical complexity, depth, and profundity of Prokofiev and Shostakovich. However, Kabalevsky’s Piano Concerto No. 3 in D Major, Op. 50 (“Youth”), is a hardy perennial not confined to youngsters: it has been recorded by the Russian piano titan Emil Gilels.

Elliot played the “Youth” Concerto’s first movement. It is a high-spirited, melodious, and cheerful work that shrewdly allows young performers the opportunity to display their technical prowess in rapid passagework. Its lyrical themes are distinctly reminiscent of Tchaikovsky.

Elliot gave the concerto a confident, well-paced, and note-perfect performance, drawing a powerful tone from the nine-foot Yamaha concert grand piano. If you closed your eyes, you would not believe you were hearing a child playing.

The following day, Toku Kawata performed the closing Rondo of Beethoven’s Piano Concerto No. 4 in G Major, Op. 58. Both a pianist and violinist, he is studying with Andrew Cooperstock as a doctoral candidate in piano performance at the University of Colorado at Boulder, where he is a teaching assistant. Kawata gave a brisk and vivacious account, distinguished by its clearly articulated keyboard figurations. The orchestra responded with an alert and stylish accompaniment, evidencing a wide variety of dynamics, under the leadership of conductor Paul Hostetter.

Tristan’s Gluck was elegant, with tastefully restrained vibrato and a chaste tone, well-blended with the orchestra. He exhibited impressive breath control on long phrases.

Although Moncayo’s best-known work is “Huapango” for orchestra, “Amatzinac” is a very attractive piece, with ostinato rhythms and lush, modal harmonies, at times breaking into an exuberant dance. The flute’s bird-like passages are quite striking. Tristan’s playing was suave, with a focused, warm tone undiluted by excess air. The orchestra’s prominent cello and viola solos were equally lovely.

Michael Sherwin, a Rockefeller and Fromm Foundation Fellow in music criticism, currently writes for the Epoch Times, Wagner Notes, and other publications.

Future concerts of the New York Concerti Sinfonietta’s International Concerto Competition winners and Shining Stars Debut soloists will be held May 4 and 6, June 22-23, and fall 2014 – spring 2015 at locations to be announced. For information, or to apply for forthcoming competitions and debuts, contact dr.juliejordan1@gmail.com or newyorkconcertisinfonietta.com.