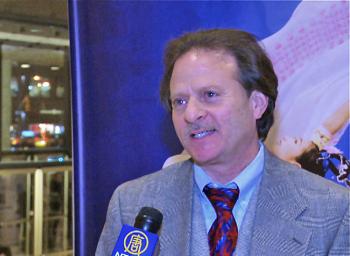 Steve Barrison, an attorney in midtown Manhattan who does pro-bono work for small businesses in the city, found the New York-based Shen Yun to be excellent.

"I did enjoy the music, I thought that this was good for people of all ages whether you are a child all the way up to senior citizens," he said, "because it exposes you to a piece of the music, some of the history you had. Great dance."

The music he was referring to is Shen Yun's orchestra, which fuses Western orchestral music with Chinese instruments. "The music mix is new to some people but it is good to learn about," he added.

"And you can’t beat the costumes," he said. He said the clothes were "colorful, beautiful. So it was entertaining."

Classical Chinese dance is one of the most ancient art forms and is the basis for gymnastics, ballet, martial arts and acrobatics.

"I like one that looks like sugar plums or cherry blossoms," he said, referring to the dance Plum Blossoms. "I enjoyed the way the dancers use the fans."

Of the performance, he said he would recommend it to anyone.