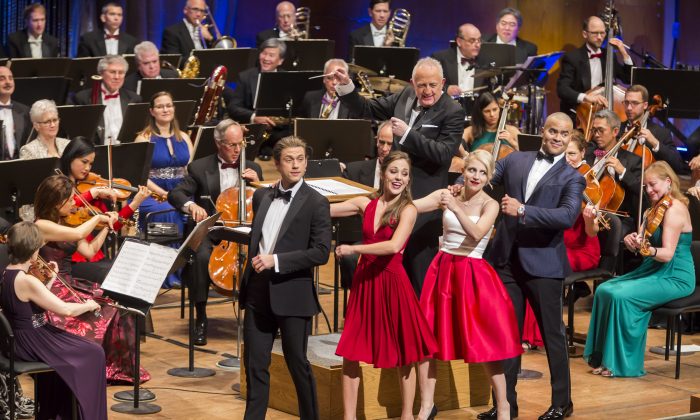 NEW YORK—The New York Philharmonic ushered in the New Year with a tribute to the late conductor/composer/educator Leonard Bernstein (1918-1990) to celebrate the 100th anniversary of his birth.

“Bernstein on Broadway” focused on his innovative writing for the theater, and the orchestra was led by another conductor/composer, Bramwell Tovey, who was also an engaging raconteur. He introduced the musical numbers and told an amusing anecdote about his single meeting with Bernstein.

The New Year’s Eve concert began with the sparkling overture to “Candide.” Although the musical adaptation of Voltaire’s novel was commercially unsuccessful, its overture, ending and the soprano piece, “Glitter and Be Gay” (which was not performed at the concert) have endured as popular works in concert.

Bernstein’s Broadway career stemmed from his music for the 1944 ballet “Fancy Free,” which was choreographed by Jerome Robbins. The ballet was about three sailors on leave in New York during World War II and the orchestra played his “Three Dance Variations.” The innovative composer incorporated the sounds of jazz and Latin music into his urban soundscape.

As Tovey explained to the audience, the success of the ballet led Bernstein and Robbins to convert the dance into a full-length musical comedy “On the Town,” on which they collaborated with another pair of up-and-coming talents, Betty Comden and Adolph Green. (Incidentally, Robbins was one of the dancing sailors in the first production of “Fancy Free,” and Green was one of the men on leave in the initial run of “On the Town.”)

From “On the Town,” Aaron Tveit and Annaleigh Ashford sang “The Taxi Number: Come Up to My Place” and she returned later for the solo “I Can Cook Too.” Ashford was hilarious as the aggressively seductive cab driver who is attracted to her sailor-passenger. It should be noted that the director of “Bernstein on Broadway,” Lonny Price, has a special flair for injecting comedy and drama into concert productions, as he previously demonstrated with the New York Philharmonic’s “Sweeney Todd.”

Christopher Jackson sang “Lucky to Be Me,” showing that he is as comfortable in musicals of the past as he is in “Hamilton.”

“Wonderful Town” was another hit for Bernstein, Comden, and Green. It was based on “My Sister Eileen,” a vehicle for Rosalind Russell, who had played the role in the non-musical movie. Laura Osnes joined Ashford for “Ohio” (a nostalgic song about the sisters’ home state, which they missed when they first arrive in New York), and Osnes sang the duet “It’s Love” with Jackson. Then, the four singers joined in the wild night club number, “Wrong Note Rag.”

Osnes delivered a lovely rendition of the ballad “Dream With Me” from a 1950 musical version of “Peter Pan,” which had starred Jean Arthur and Boris Karloff. From “West Side Story,” Jackson did “Cool,” followed by the duet “Tonight, Tonight” and finally by Tveit’s rapturous rendition of “Maria.”

The instrumental, “Mornin’ Sun” is an excerpt from Bernstein’s opera “A Quiet Place.”

The concert ended with “Make Our Garden Grow” from “Candide,” in which the orchestra and soloists on stage were joined by the Westminster Festival Chorus, who walked down the aisles.

There will certainly be many more tributes to Leonard Bernstein in the coming year, but this concert marked an auspicious beginning to the centennial. The concert was broadcast on PBS.