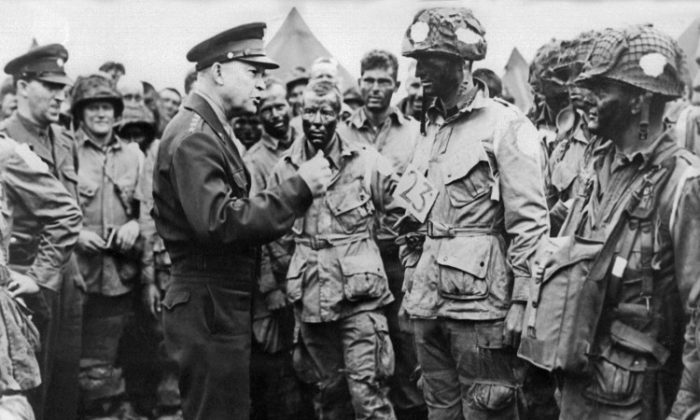 NEW YORK—A planned monument to President Dwight Eisenhower in Washington, D.C., funded largely by taxpayer dollars, has been put off until next year amid controversy over the design. Now, while one modern architect’s extravagant vision for the memorial has come under fire, a classical sculptor is publicly putting forward a cost-effective and inspiring vision that could be a viable alternative.

The initial plan fell apart when the $142 million design being put forward by Frank Gehry was heavily criticized by the son and grandchildren of former President Eisenhower. Eisenhower was a World War II general and champion of anti-communism when he was in the White House in the 1950s.

Gehry, known for his modernist designs that use unconventional shapes and warped structures to appear as if they are melting, had conceived of huge 80-foot metal tapestries depicting scenes from Eisenhower’s boyhood in rural Kansas. The smaller statues of Eisenhower would be dwarfed by the tapestries as well as by large horizontal blocks with Eisenhower quotes on them.

“Though it is creative, the scope and scale of it is too extravagant and it attempts to do too much,” wrote the former president’s son, John Eisenhower, in a letter to Congress in October.

President Eisenhower’s granddaughter Susan Eisenhower has likened the tapestries dominating the design to something seen in a totalitarian state.

In September, a press conference at the National Press Club criticized the planned design for focusing on Eisenhower’s boyhood and avoiding his military and presidential achievements.

“It really should be making it very clear that we’re celebrating and honoring this man because of what he did for the country as an adult. We don’t celebrate Lincoln by going out and building log cabins,” said Roger K. Lewis, a practicing architect and professor emeritus of architecture at the University of Maryland, according to the blog Stars and Stripes.

“It should not be first about the artist, which it is for Gehry, as in, ‘Look there’s Gehry’s memorial.’ Most people do not know the names of the architects or sculptors of the world’s renowned monuments but they do experience those artists’ profound hopes and aims,” wrote painter Patrick Connors.

Last week, classical sculptor Sabin Howard made public his concept for a more traditional monument that focuses, with power and simplicity, on Eisenhower.

He said he originally put forward the plan in the summer at the request of Gehry himself but was misled about it being used, and it was eventually ignored.

Raised in both Italy and New York, Howard is an accomplished sculptor of 30 years who sees himself carrying on the traditions of great masters like Michelangelo. He knew what was wrong with the current memorial design as soon as he laid eyes on it.

“When I saw the memorial models, my heart sank. The project was trying to reinvent the wheel with newness, and it was missing the point entirely. Components were stiff and compartmentalized like a natural history museum exhibit. There was no focal point, but a lot of elements that did not work together to deliver a unified visual message,” Howard wrote in his blog on Dec. 7.

Instead of having 80-foot metal tapestries dominate the work, Howard suggests the statues of Eisenhower with his troops be changed into an 18-foot-by-11-foot relief and be reworked to show a clear sense of hierarchy and narrative.

Directly across from the relief, Howard would eliminate a giant tree that blocks the central view of the memorial and put a 10-foot sculpture of Eisenhower, elevated on a 5-foot pedestal.

“The design has to become sacred, because of Eisenhower’s historical importance. Making the blocks vertical would lead visitors to look up, giving them an expansive feeling. They would also be able to read the writing about Eisenhower with a sense of elevation, because of the heightened perspective,” wrote Howard.

The sculpture and the relief would balance each other in Howard’s design.

“The architecture would create symmetry and tie these two different sculptures together. The symmetry would leave the visitor with a memorable, visceral experience,” he wrote.

Howard’s vision not only has the potential to satisfy many critics and leave a rich rendering of the former president, but would also be significantly cheaper than Gehry’s design.

“I envisioned Eisenhower both as a statesman, exemplifying the contemplative life, introspective in thought, and Eisenhower as a soldier, exemplifying the active, expansive life,” wrote Howard. “These striking images of a hero who leads a nation through transformation would serve to inspire viewers and to show what we, as a nation, can be.”

No formal competition process by which Howard could submit his design has been announced, though one could conceivably open up since the future of the memorial remains uncertain.

In his congressional testimony in March, National Monuments Foundation President Rodney Cook called for an open competition for a new design. The foundation is among the few organizations that design, build, own, operate, and maintain civic assets. He questioned both the practicality of giant metal tapestries proposed by Gehry and the aesthetics.

“I have read that Mr. Gehry thinks there are no great sculptors left in the world,” Cook said. “I disagree.”