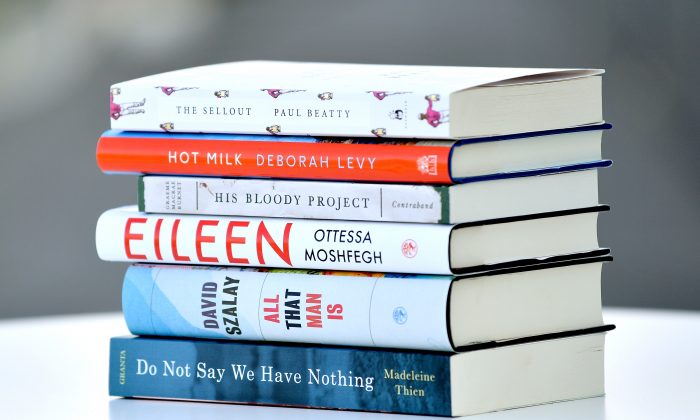 LONDON, ENGLAND - SEPTEMBER 13: A general view of the books shortlisted for the Man Booker Prize For Fiction during a press conference at the offices of sponsor Man Group on September 13, 2016 in London, England. (Photo by Gareth Cattermole/Getty Images)
Arts & Culture

New Talent to the Fore in Man Booker Prize Shortlist

Judges for top British literary award the Man Booker Prize spurned big-name novelists in favour of experimental new talent as they announced their shortlist in London.

None of the six writers who made the cut for the coveted prize for fiction is well known outside literary circles.

Those who failed to make the shortlist included Nobel Prize winner J.M. Coetzee, with “The Schooldays of Jesus”.

The panel of judges told a press conference they wanted to reward creative pioneers.

“Being innovative, being bold, courageous, a willingness to take risks, being novel within the novel – that’s what really excited us because it shows that the art form isn’t being nostalgic,” said Amanda Foreman, chair of the judges.

Bookmakers Ladbrokes have made Graeme Macrae Burnet favourite to win with “His Bloody Project” at odds of 5/2.

The novel tells the story of a memoir written in prison in 1869 by a triple murderer. The manuscript is discovered by one of his descendants, who shares the author’s name. He then edits and publishes the work himself.

Previous winners of the prize include Hilary Mantel for “Wolf Hall”, Salman Rushdie for “Midnight’s Children” and Michael Ondaatje for “The English Patient”.

The winner will be announced in London on October 25.

Other shortlisted novels include US author Paul Beatty’s “The Sellout”, a satirical novel set in a fictional Los Angeles neighbourhood which explores racial equality and the civil rights movement.

One of the judges was actress Olivia Williams, who read many of the books between rehearsals and performances at London’s National Theatre.

She described “The Sellout” as “shocking and unexpectedly funny” and compared it to the work 18th century satirist Jonathan Swift, author of “Gulliver’s Travels.”

Another was “All That Man Is” by Canadian-British author David Szalay, which judge Jon Day said was about “masculinity and the state of contemporary Europe – a post-Brexit novel for our times”.

It traces nine moments in the lives of different men across the continent – from a Prague suburb to a Belgian motorway – to make wider points about masculine identity.

South African-born Briton Deborah Levy is the only author previously shortlisted for the prize to make this year’s final six.

She made the cut for “Swimming Home” in 2012 but this year is included for “Hot Milk”, described by its publishers as “a study in paralysis” set in a Spanish fishing village.

Foreman said it was about “the toxic waste produced by damaging parents and damaged children”.

Completing the shortlist are “Eileen” by US author Ottessa Moshfegh and “Do Not Say We Have Nothing” by Canada’s Madeleine Thein.

First-time author Moshfegh, 35, has written a portrait of a disturbed young woman trapped between caring for her alcoholic father in a squalid house and her job as a secretary at a boys’ prison.

“Do Not Say We Have Nothing” is based around a world of classical music and silence in revolutionary China.

The judges dismissed suggestions that many of the books were gruelling and their characters unsympathetic.

“‘Hot Milk’ had me laughing out loud,” said Williams, whose films include “Rushmore” and “The Sixth Sense”.

“I was banned from reading ‘The Sellout’ in bed by my husband because I kept shaking the bed, I was laughing so much.”

The Man Booker carries a cash prize of £52,500, but its higher reward lies in prestige which typically generates huge sales.

The Man Booker and Nobel Judges Are Right: Novels Can Do Us Good
TOP NEWS