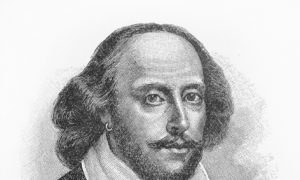 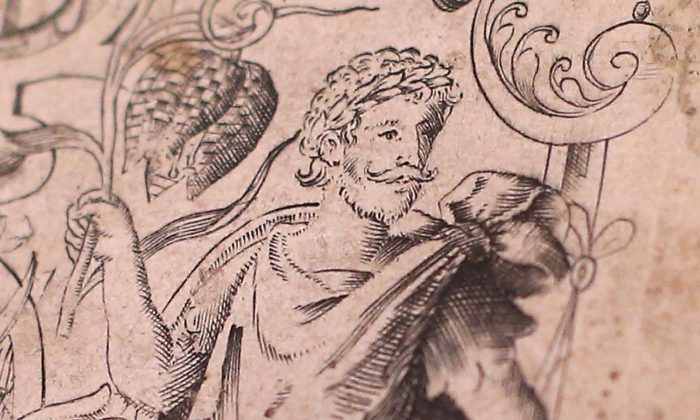 A copy of The Herball book shows what is thought to be the first authenticated living portrait of William Shakespeare at The Rose Theatre on May 19, 2015 in London, England. (Peter Macdiarmid/Getty Images)
Arts & Culture

Historian Mark Griffiths claims to have cracked a code in an Elizabethan book on botany, to discover a true portrait of Shakespeare made within the bard’s own lifetime. The find has been hailed as “the literary discovery of the century” by the editor of Country Life—the magazine in which the details of Griffiths’s process will be revealed. Yet other scholars, including the director of the Shakespeare Institute, professor Michael Dobson, remain skeptical.

Shakespeare didn’t take selfies or have an Instagram account (imagine!), so we’ll never know what he actually looked like. But we do know what other people thought he looked like. Scholars like Erin Blake have done lots of hard work cataloging portraits of Shakespeare, thinking about who made them, and assessing how reliable they are.

The Strange Fates of the Shakespeare First Folio

Blake’s findings are fascinating because they show what people invest in these images of Shakespeare, and how these images have changed over the years. Blake suggests we make Shakespeare in our own image: and the picture isn’t always flattering. As is said of an artist in Shakespeare’s “Timon of Athens“: “Thou canst not paint a man so bad as is thyself.”

Instead of weighing into this current dispute, we might ask why it is happening at all. Why does it matter to anyone that we might now be seeing a new image of Shakespeare—who cares? Some people in the media have commented on the “sexy,” “film-star” looks of the person in the picture. Should this mean we now re-read the plays and poems as not being written by some bald guy with a quill (as most other pictures depict Shakespeare), but instead by a hot Joseph Fiennes look-alike, à la “Shakespeare in Love”? Clearly not.

Perhaps the excitement such finds generate reveals something more profound and troubling about how we think about figures like Shakespeare. At the very least, these disputes might make us ask what Shakespeare means to us. Is he the words, the books, the books about the books, the plays and films and songs about the books (and the books about them)? The vast Shakespeare industry involves education, publications, theater, cinema, gift shops, guided walks, themed restaurants, and even police posters (I once saw one in Stratford-upon-Avon warning customers that if they drank too much they’d be “Bard”).

There are several ways we might consider some people’s urge to cling to or revere these ephemeral, tangential hints at who Shakespeare was, or what he was really like. One way to explain this urge would be to see it as love for the man and his works, meaning we want to experience both in as many ways as possible. This is a bit like the feeling you get when a band releases an album, and you want to hear and know more, so you go to the concert, buy the poster, put on the T-shirt, seek out bootlegs and so on. Maybe we just can’t get enough Shakespeare.

But another, less positive, way to think about this would be to see this devotion as revealing a kind of separation from Shakespeare and his work. Perhaps the trumpeting and selling of stuff around Shakespeare is an admission that we find it hard to get to grips with his actual words. It could be that consuming Shakespeare in commoditized, mediated, fragmented gobbets and chunks makes him easier to digest. The more alienated we become from Shakespeare’s words, the more remote we are from him as an author.

In fact, the more we make and buy and sell relics, effigies, and icons of Shakespeare, the more we make him an idol. Reflecting on the latest revelations about Shakespeare’s identity might seem harmless enough, especially when the discoveries are framed in a Dan Brown-esque tone of code-cracking and secret messages. But relics, devotion, and revelations are for religion, right? So here’s the paradox: A portrait might make Shakespeare human, but it also makes him holy. This is what critics like Graham Holderness have called “bardolatry”: the uncritical worshiping of Shakespeare the deity, at the expense of studying Shakespeare the writer.

These kind of paradoxes, stories, and objects leave educators and scholars of Shakespeare in a quandary. The question remains whether we should build on the excitement and debates caused by such “discoveries,” or work even harder to break down the barriers around Shakespeare which make those stories and images necessary. Are newly discovered portraits a “way in,” or do they signify that the attempt to grapple with what Shakespeare might mean has left the building? Ben Jonson said of the image of Shakespeare on the cover of the 1623 Folio, “Reader, look / Not on his Picture, but his Booke.” We would do well to listen to his advice.

Adam Hansen is a senior lecturer in English literature at Northumbria University–Newcastle in the U.K. This article was previously published on TheConversation.com