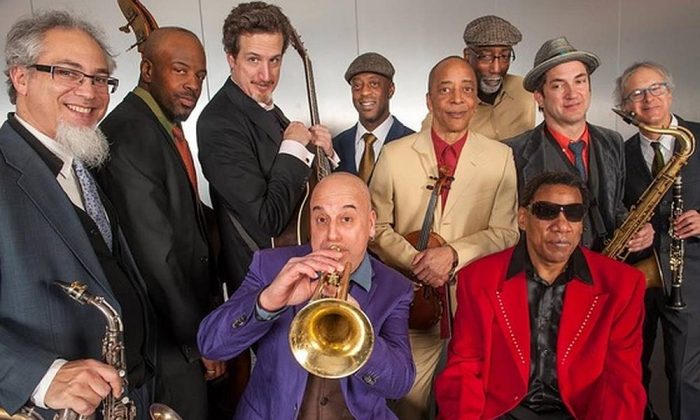 NEW YORK—The weather may have been chilly, but the music inside the Jazz Standard was sizzling, supplied by Henry Butler-Steven Bernstein and the Hot 9. While wonderfully entertaining, a performance by the Butler-Bernstein Hot 9 is like a lesson in jazz history. This is New Orleans jazz, filtered through the sensibilities of Butler, a pianist of the first order from the Crescent City, and native New York trumpeter Bernstein, who writes the arrangements and leads the group.

Butler, born blind, is not only an honored musician; he is also a noted photographer. His work was featured in the documentary “Dark Light: the Art of Blind Photographers” and is included in a touring exhibition, “Sight Unseen: International Photography by Blind Artists.”

Butler is a piano virtuoso as well as a composer and arranger, who can conjure up the sounds of early jazz and blues, ragtime and swing, and then add more modern touches. He continues the piano tradition of Professor Longhair, James Booker, and Allen Toussaint.

Often he will introduce the tunes with cascades of notes reminiscent of Cecil Taylor, before the band settles into a finger-snapping groove. This happened on the first number, “Sugarfoot Stomp.” Afterward, Bernstein reminded the audience that the country had survived a king. The audience laughed, thinking he was referring to the current administration or King George. Then, Bernstein slyly added that he was referring to the legendary early jazz trumpeter and bandleader King Oliver—the purported composer of the tune.

In his playing, Bernstein conjures up the sounds of the New Orleans trumpet kings, like Louis Armstrong and King Oliver. His arrangements are filled with surprises. Like Erroll Garner’s performances, the ornate introductions often bear no relationship to the piece they are leading into.

Fats Waller’s “Viper’s Drag” (the title track of Henry Butler-Steven Bernstein and the Hot 9’s delightful CD on Impulse!) is a good example of this. The playing evokes Waller’s wit, with the interjections of the theme from Grieg’s “In the Hall of the Mountain King” from “Peer Gynt Suite” to convey a sort of comic horror atmosphere.

Jelly Roll Morton (1890–1941) is a key figure in the history of jazz. In fact, he claimed to have invented the form. While some historians challenge this assertion, no one denies his brilliance and originality as a composer. The Hot 9 performed his “Wolverine Blues” and a bluesy rendition of “I Though I Heard Buddy Bolden Say.”

In the latter, Butler sang an emotional vocal. The song is a tip of the hat from one music pioneer to another, as Bolden (1877–1931) of the title, was a leading cornet player/bandleader from New Orleans.

The arrangements also provided space for the individual band members to shine. There were pungent solos by Curtis Fowlkes on trombone, Doug Wieselman on clarinet and tenor saxophone, Peter Apfelbaum on tenor and soprano saxophone, Erik Lawrence on baritone and soprano saxophone, Matt Munisteri on guitar, Luques Curtis on bass and Donald Edwards on drums.

The show ended with a rousing rendition of the Mardi Gras song, “Iko Iko” with the musicians marching through the audience playing their instruments, as in a New Orleans funeral. It was the next best thing to a trip to the Big Easy.

Among the highlights this month at Jazz Standard are two masters of Cuban music, Alfredo Rodriguez and Pedrito Martinez on Feb. 9 and 10, followed by Rodriguez with his trio on Feb. 11 and 12. A Valentine’s Day show will star trumpeter/vocalist Bria Skonberg with saxophonist Houston Person on Feb. 14, and powerful saxophonist Ravi Coltrane from Feb. 21 to 26.  The Mingus Big Band alternates with the Mingus Orchestra on Monday nights.