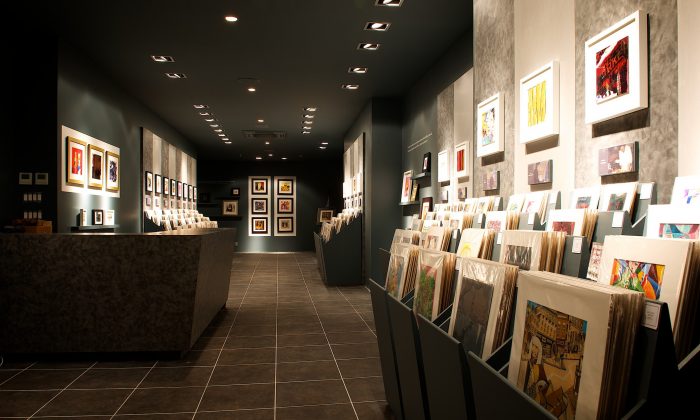 When you walk into the chic, grey-painted store, you’ll see white-matted paintings filed neatly in racks all up and down the walls. Pop and hip-hop stream from the speakers. It feels more like a record store than an art gallery.

The brand Carré d’artistes was founded in France in 2001. It already has 18 stores around the world and plans to expand to Mexico, Moscow, Hong Kong, and Beirut.

Carré’s mission is “to democratize contemporary art, make it affordable, and accessible to a wide audience,” according to Rodolphe Lecomte, the franchise director in New York.

“Usually traditional art galleries sell only a few things, and you can’t touch it—only with your eyes, not with your wallet,” he said.

The traditional gallery of contemporary art hangs large works and usually represents a handful of artists at a time. Here, customers are welcome to handle the artwork, take them out of the plastic slips and see how they look in frames and on the wall.

When an artist signs on with Carré, he or she is asked to create 10 original artworks each in squares of four sizes—the smallest being 4 inches by 4 inches and the largest 12 inches by 12 inches. The prices are $105, $175, $295, and $520. There is one price per size regardless of the artist, whether the name is famous or not.

The New York gallery features 25 artists out of the 500 that cycle through all of the brand’s galleries.

Some large format works are featured on a monthly basis, but most Carré offerings can fit in a tote bag.

Lecomte estimates that in total, the galleries sell 20,000 artworks a year.

Customers tend to fall under two categories, said Lecomte—those who are already familiar with some of the artists and are looking to cash in on an upward career trajectory, and young people who want artwork for their apartments but don’t have much to spend.

In addition to the casual atmosphere and straightforward pricing, the relationship Carré fosters between artists and customers is key to its business concept.

One artist is selected each month by a five-person committee composed of professionals, amateurs, collectors, and artists. Over 100 artists apply to partner with Carré d’artistes each year, said Lecomte.

An artist’s work is available in only one gallery at a time, each time not exceeding 12 to 18 months.

“And then we send them (their work) to another gallery to expose them to a new public,” Lecomte said.

If the public, and particularly art lovers new to collecting, embrace this type of art gallery, it could foretell a change in the ways galleries do business.

When asked whether he thinks this concept could be used to sell more traditional art, Lecomte said, “Yes, absolutely. The owner of the concept loves contemporary art, but I think it could fit with other genres.”

What’s yet to be determined is whether traditional artists would go for such a method of working.

If you’re a traditional artist, email us at nyc_arts@epochtimes.com. If there were such a gallery that features landscapes and portraits, would you be interested in being represented in it?