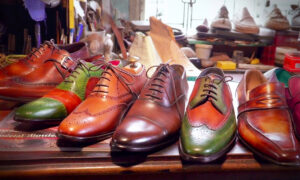 Cape Hatteras National Seashore on North Carolina’s coast is famous for it’s beautiful beaches and fishing spots, but a new addition to the coastline has locals and tourists buzzing.

A new mile-long sandbar island has formed just off the coast, thanks to the shifting Gulf Stream and Labrador currents.

Janice Regan, a visitor to the island, told The Virginian-Pilot that the island was just a little bump in April.

Regan and her 11-year-old daughter searched the Island for shells on Memorial Day. The bounty of complete shells was so rich, they named the place Shelly Island.

“It’s a dynamic area,” Mark Dowdle, the deputy superintendent of the Cape Hatteras National Seashore, which oversees the island, told ABC News. “The sand is always shifting and moving.”

“It could continue to grow or soon it could be completely gone,” Dowdle continued. “We don’t know.”

Bill Smith recently used a kayak to get to the island.

“It’s fun to go out there. It’s a great place to shell,” Smith, the president of the North Carolina Beach Buggy Association, told ABC News.

Officials warn that swimming to the island can be dangerous because the water is deep and the current is strong. In addition, fish hooks from decades of fishing could be on the bottom. Five-foot-long sharks and giant stingrays have also been seen prowling the waters, Smith said.

Dowdle recommended a floatation device for those who do dare to swim to the island.