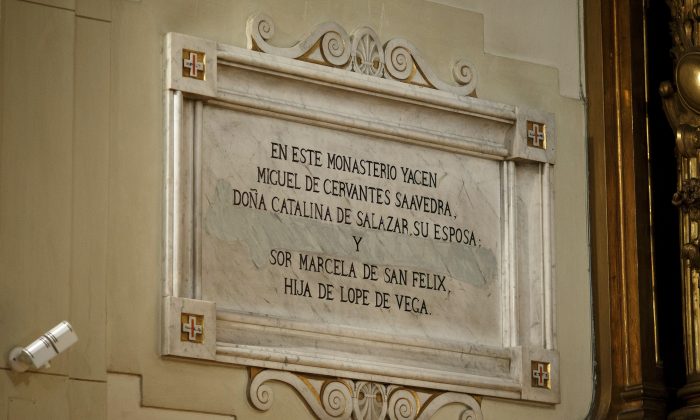 The documents highlight the work of the writer
By Anastasia Gubin

MADRID—Four papers and a new autograph of the great writer and poet Miguel de Cervantes Saavedra, found in Seville and La Puebla de Cazalla, reveal new information on the life of the author of Don Quixote. This information is written in a report by researcher José Cabello Núñez and was published on his blog and social page ‘History of La Puebla de Cazalla’ on August 11.

Working as an archivist, José Cabello, local history researcher and member of the Sevillian Chroniclers Association, found the first document in the township of La Puebla de Cazalla. It is an agreement from 1593, between Cervantes and the City Hall, of a requisition of wheat and barley. He was 46 at that time.

The document also states that Cervantes worked for Cristobal de Barros, supplier of the Indian Fleet, according to Diario El León.

This fact, says Cabello, changes biographical data about the situation of the great Spanish writer who was born in Alcalá de Henares in 1547. Earlier found information assumed that Cervantes was not involved in non-writing activity at the time.

The discovery led to the investigation of the Indian Fleet’s files where two more documents were found.

One of them notes that Cervantes was in La Puebla de Cazalla between February and April 1593 as Commissioner of Supplies. The other one states that his salary was given to a woman named Magdalena Enriquez, Diario El León reported.

Investigated this latter fact further, Cabello found a power of attorney in the archives of the Seville protocols, by which Cervantes himself empowered Magdalena Enríquez to collect his fees as Supplies Commissioner.

Cabello suggests Cervantes must have had a significant level of trust towards this woman in order to authorize her to receive his wages.

When analyzing the findings, the philologist Francisco Rico told Faro de Vigo on August 11, 2014 that there are “many references to Cervantes as Commissioner of Finance in those years.”

Rico explained, “Magdalena Enríquez worked for the Indian Fleet just as Cervantes, so they could have had some sort of business relationship or other, it is not easy to know.”

“At that time, even to have a suit made, one had to sign a notarized document,” he said. “Although based in Seville, Cervantes would probably travel through all these Andalusian villages, and have had a sort of savings-bank account in the city, which might explain this power of attorney.”