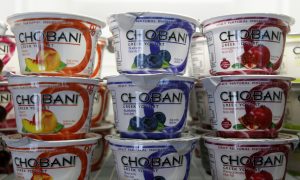 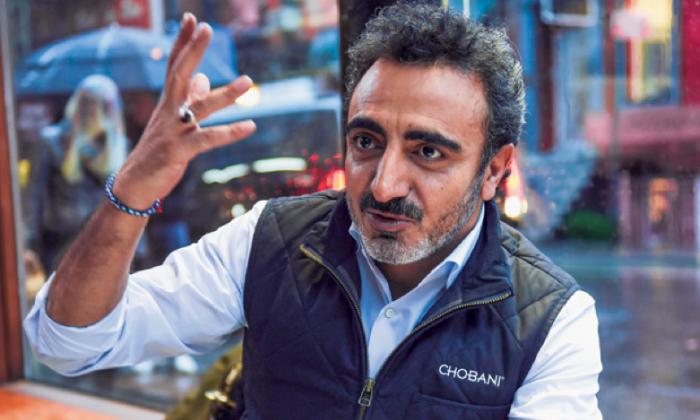 Hamdi Ulukaya, CEO of Chobani, during an interview in New York on Nov. 17, 2014. (DON EMMERT/AFP/GETTY IMAGES)
Leading With Wisdom

Hamdi Ulukaya is the founder and CEO of Chobani, a business that produces Greek-style yogurt. Last spring, he addressed the graduating MBA class of the Wharton School business school at the University of Pennsylvania.

Ulukaya, a Kurdish immigrant from Turkey, shared wisdom that points to integrity and character as essential aspects of business success.

Resources Not the Crucial Issue

After arriving in New York City, Ulukaya moved to upstate New York and started a cheese business. In 2005, an unprofitable Kraft yogurt factory in New Berlin, New York, came up for sale.

Where Kraft saw a shrinking business, Ulukaya saw entrepreneurial opportunities. Nobody was making quality yogurt for mass-market sale in supermarkets. He had few resources. He told his story to the Wharton graduates:

“I called my attorney, Mario, and said, ‘I want to buy this plant.’

“He said, ‘Hamdi, the largest food company in the world is closing this plant. They’re getting out of the yogurt business. Who the hell are you to make it work?’

“Mario said, ‘Hamdi, you have no money. You haven’t even paid me in six months!’ Which was true.”

Many think money is the primary key to entrepreneurial success. Many see companies such as Chobani and Apple as rare exceptions, believing that start-up success is blocked to all but the wealthy or those who can raise money from venture capitalists.

Too much money and you may lose sight of what is essential: solving an urgent need of consumers. Too much money and you may find, as the dot.com bust company Quokka did, that your budget for pricey Aeron chairs exceeds your annual revenue. Or, you may find yourself, as another well-capitalized bust Flooz did, spending 8 million dollars for a celebrity spokesperson campaign by Whoopi Goldberg. Or, you may, as Chobani didn’t, hire more employees than your current growth supports.

Too much money and you may lose sight of building your business culture on a foundation of purpose, principles, and values. Dee Hock, the founding CEO of Visa, observed this in his book, “One from Many: Visa and the Rise of Chaordic Organization”:

“An organization’s success has enormously more to do with clarity of a shared purpose, common principles and strength of belief in them than to assets, expertise, operating ability, or management competence, important as they may be.”

A Detailed Plan Is Not Crucial

Consistent with Hock’s advice, Chobani had a strong sense of purpose from the beginning—the production of a higher quality mass-market yogurt. In five years, Chobani became the largest producer of Greek yogurt, with now over $1 billion in annual sales. To have such success, some assume Ulukaya must have had a bullet-proof, detailed business plan.

Initially, he hired back four employees from the Kraft plant; these former employees thought Ulukaya had a “magic answer” to success. His first initiative was to paint the walls of the manufacturing facility. An employee said to Ulukaya, “Tell me you have more ideas than [painting the walls].”

Ulukaya continued: “And I said, ‘I do. We’ll paint the walls white.’ Honest to God, I did not have any other ideas …

“That summer, we painted those walls. Along the way, we came up with more ideas. Every day for the next two years, we worked on the recipe for our yogurt. Once I knew it was perfect—meaning it was as good as the yogurt my mother made—we launched Chobani in 2007. Time passed, and eventually, we hired almost all of the original 55 workers back. Then, we hired 100 more. And 100 more after that. And we started to grow—fast.”

Ulukaya recognized that organizational intelligence wasn’t limited to his own; he and his team discovered each next step. Imbued principles, purpose, and values-guided business decision-making, without a complicated playbook. Charles Koch, CEO of Koch Industries, understands this well. In his book “The Science of Success,” Koch offers this advice:

“To function effectively, any group of people, whether a society or an organization, must be guided largely by general rules of just conduct, not just specific commands. Leaving the particulars to those doing the work encourages discovery. It also enhances adaptation to changing conditions.”

Hock explained succinctly how to unleash the entrepreneurial discovery process in a firm with this maxim: “Simple, clear purpose and principles give rise to complex, intelligent behavior. Complex rules and regulations give rise to simple, stupid behavior.”

In other words, command-and-control is as deadly in an organization as it is in an economy.

Humility Is Paramount for Business Success

Above all, Ulukaya values humility and character as keys to business success. As his company grew, Ulukaya thought maybe he should hire a CEO with more experience. He tells of interviewing “a bigshot at another company, [who] had lots of experience—an MBA, big salary, stories written about him.”

“One day, I met him for breakfast at a diner. He was so anxious to impress me that he completely dismissed the waitress. He was really rude to her and totally disrespected her. For me, this wasn’t a sign of power. It was a sign of weakness. It showed a lack of character,” Ulukaya said.

The candidate for CEO “forgot what was most important,” he adds. “I realized at that moment, I had more in me than I thought.”

Ulukaya asked his colleagues at Chobani “what my message should be to you.” Their response focused on humility: “It’s great that you are a Wharton MBA. But please, don’t act like it.”

Ulukaya recognized that his colleagues offered wise advice: one must recognize the limits of their own mind. To the Wharton graduates, he cautioned, “Don’t let [your degree] be a burden on you. Don’t let it get in the way of seeing people as people and all they have to offer you, regardless of their title or position.”

If we don’t focus on our own character, inevitably we will try to control others. Hock coaches us on self-management:

“The first and paramount responsibility of anyone who purports to manage is to manage self: one’s own integrity, character, ethics, knowledge, wisdom, temperament, words, and acts.

“It is a complex, unending, incredibly difficult, oft-shunned task. We spend little time and rarely excel at management of self precisely because it is so much more difficult than prescribing and controlling the behavior of others.

“However, without management of self, no one is fit for authority, no matter how much they acquire, for the more authority they acquire, the more dangerous they become.”

Humility is an essential ingredient for business success because growing a business requires examining and filtering new ideas with a spirit of discovery and openness. New ideas may invalidate old practices and deeply held beliefs.

Kraft may have seen a declining market for the yogurt they were producing, but a market was opening for a thicker, less sweet, Greek-style yogurt. A billion-dollar industry was invisible to Kraft, but visible—through the discovery process—to Ulukaya and his team at Chobani.

Another lesson from Chobani should be illuminated: New discoveries by one entrepreneur create opportunities for others. The demand for Greek yogurt revealed opportunities for similar Icelandic skyr and competitors, such as Siggi’s.

Ulukaya ended on an optimistic note: “It’s business, not government, that is in the best position to lead today.” Businesses—not the government—create opportunities for immigrants such as Ulukaya and all Americans.

Barry Brownstein is professor emeritus of economics and leadership at the University of Baltimore. He is the author of “The Inner-Work of Leadership.” This article was originally published on FEE.org