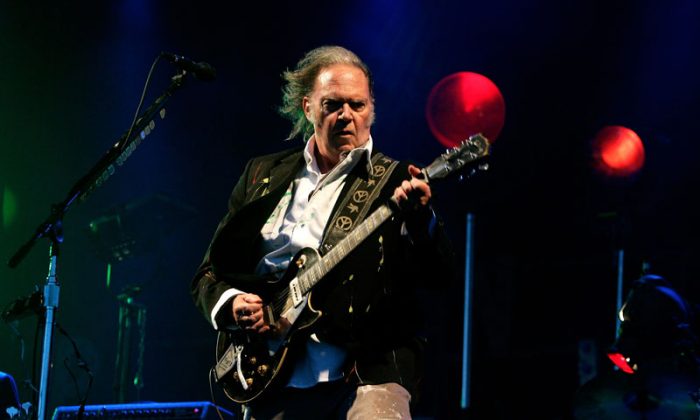 Let’s make it clear: Neil Young is amazing. Yes, at this new Kent-based festival we had Everest’s melodic indie-tinged country rock, the Guillemots’  eccentric mix of big beat, indie and a cappella (oddly reminiscent of Wings) and My Morning Jacket’s soulful southern cosmic rock… but it was all setting the stage for “the godfather of grunge”, Neil Young.

Ominous looking weather was fast forgotten as he launched into a storming ‘Love and Only Love’ to start a full-on electric assault and the best Harley D ride you’ll ever have. He produced incredible,wild and other-worldly sounds that set the spine a-tingling. Just what was needed to keep the gathering storm clouds at bay, which is exactly what happened as the sky slowly cleared.

A version of ‘Hey, Hey, My My (Into the Black)’ helped start things at the top and they just travelled up from there, with some “better to burn out than to fade away” outros surely unmatched in the free world. An acoustic interlude of some classic songs was touching, but we were itching for him to strap on his beaten up Les Paul once more, which he did, having first treated us on semi-acoustic to a sublime version of the epic ‘Words’, rendered as though words were the least relevant of all possible sounds. A mystical electric reverie ensued in the form of this dramatic epic from Harvest. Haunting, like a coyote calling across the night, his delivery from the keyboard of ‘Mother Earth’, a simple, humble yet hugely dignified lament that showed affinity for a dispossessed and ravaged planet, proved a plaintive leveller to the mesmerised faithful.

His greatness was distilled in ‘Needle and the Damage Done’ and later he literally played the strings off his “old black”.  After he’d gone and before the encore, in a powerful, wordless statement it stood against the amp, floodlit with steels straggling in all directions from the well worn fret board.

‘No Hidden Path’ was a standout from his new album. He was deeply into this one and didn’t want it to end, repeating the sublime refrain over and over and better each time; “Ocean sky, sea of blue, Let the sand wash over you…Will the northern lights still play as we walk our distant days….”. His guitar work was just superb, as he made it sing beautiful whale noises with unspeakable grace and grandeur.

Neil Young is… Neil Young. How else can it be put? No one else can do this. Live, he’s the greatest, hands down. He makes other performers seem like relatively tame young upstarts. A cathartic and primal musical experience.