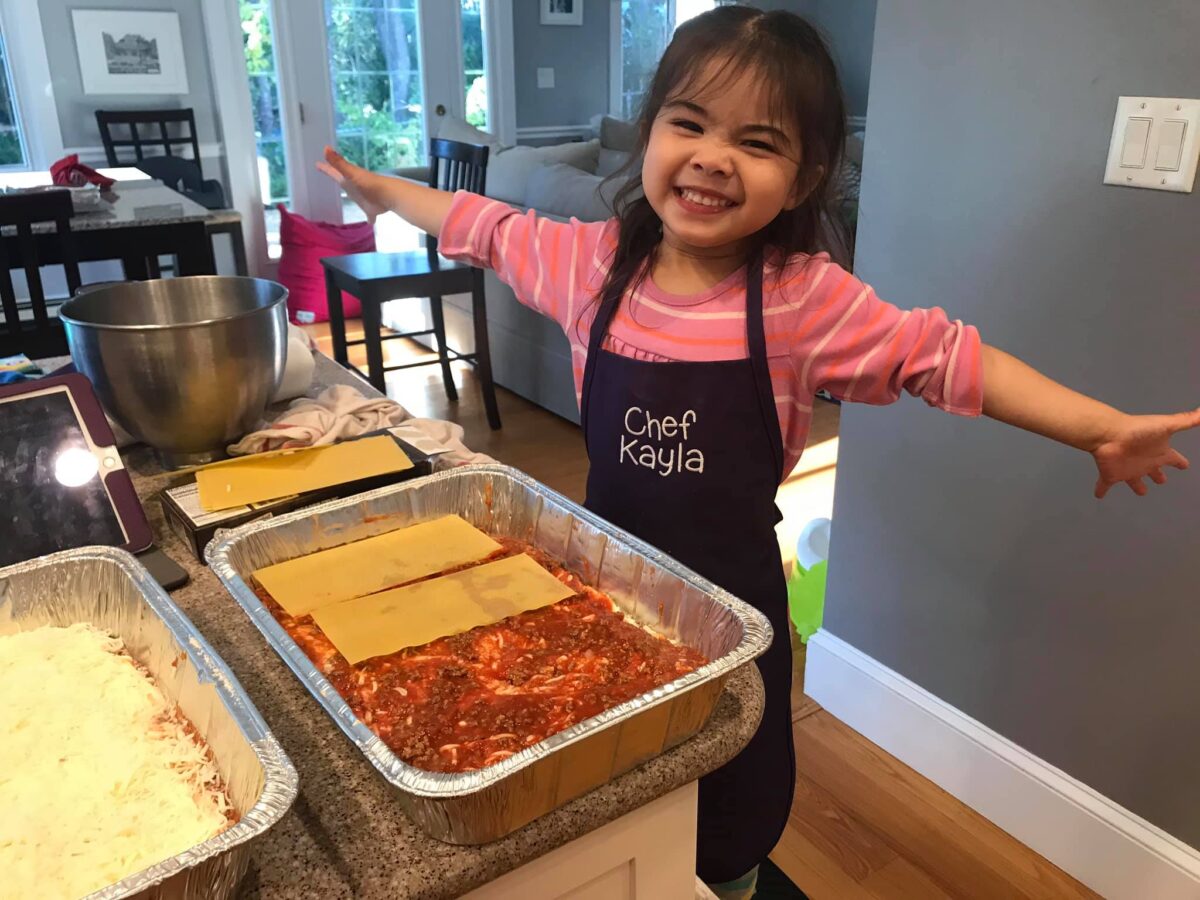 Volunteers across the U.S. cook up some warmth and love through "quintessential comfort food"
BY Dave Paone TIMESeptember 13, 2022 PRINT

There’s no problem that a pan of lasagna can’t solve.

While that statement isn’t really true, Rhiannon Menn believes it can at least help.

“Lasagna is the quintessential comfort food,” she told The Epoch Times. “It communicates warmth and love.”

At the start of the lockdowns in March 2020, Menn was a mom in San Diego who wanted to do something kind to support families in her neighborhood who were contending with pandemic-related woes.

Through a social media post, she offered to deliver a hot pan of lasagna to the doorstep of anyone who was interested in one.

“In those early days, I didn’t just want to deliver a meal; I wanted to deliver that sense of warmth and love and kindness that said: ‘We’re here for each other. I’m here for you. We’re going to get through this together.’ And I think lasagna does that,” she said.

After Menn posted her offer online, there were seven families who responded.

One of them was a woman who was taking care of her mother, sister, and a 6-month-old baby. Her income had stopped due to the lockdown and their refrigerator had broken down.

“They had been eating ramen noodles for two weeks,” Menn said. “That just broke my heart.”

When Menn drove up to the residence, she saw the discarded refrigerator out front.

“I burst into tears,” she said.

She knew then that she had to keep donating pans of lasagna as long as she could.

In March and April 2020, Menn made the first seven deliveries on her own.

“By May, I had 10 volunteers in San Diego and I wasn’t even looking for volunteers. I wasn’t looking to grow,” she said.

By September, Menn had 500 volunteers. She named the charity Lasagna Love.

At the end of September, Menn was on the “Today” show.

That program was Kelly Andolina’s introduction to Lasagna Love.

“I immediately went to sign up to be a volunteer,” she told The Epoch Times. Andolina is now its regional director of New York and Pennsylvania.

It has delivered more than 250,000 pans of lasagna, made by more than 35,000 volunteers (called “lasagna chefs”) in all 50 states plus Canada, Australia, and the United Kingdom. It delivers upwards of 3,500 pans of lasagna weekly.

Not Just for Families

In addition to delivering to families in need, Lasagna Love also provides food for firefighters, police officers, and hospital nurses.

In one night, Andolina oversaw the delivery of a staggering number of pans of lasagna to three hospitals in upstate New York to feed a total of about 300 nurses. This included salad and dessert.

Volunteers have also provided meals to first responders and victims of natural disasters, such as the California wildfires.

A Lifetime of Cooking

Times have changed. Young people learning how to cook in modern America learn how to cook meals from ethnicities in addition to their own.

Lasagna is an Italian dish. Menn is of Ukrainian descent.

“We make borscht and perogies,” she said.

“I’ve been cooking since I was small enough to make brownies in the microwave.”

Menn learned to cook all through grade school into high school, and owned a catering company at age 16.

So she doesn’t limit herself to borscht and perogies. She makes dishes from a wide variety of regions, and that includes lasagna.

Menn discovered that a large percentage of the recipients are so touched by the gesture that they “pay it forward,” often immediately.

One January, a recipient said he was so moved and impacted by the donation that he turned around and paid his upstairs neighbor’s heating bill.

In another instance, a woman received a pan of lasagna and the next day learned about a local family who had lost everything in a fire. She happened to have three storage units full of furniture. She donated it all to the family.

“The world needs more kindness,” Andolina said. “And I think that this organization shines through with the kindness. It’s amazing.”