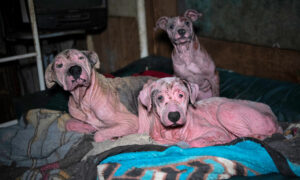 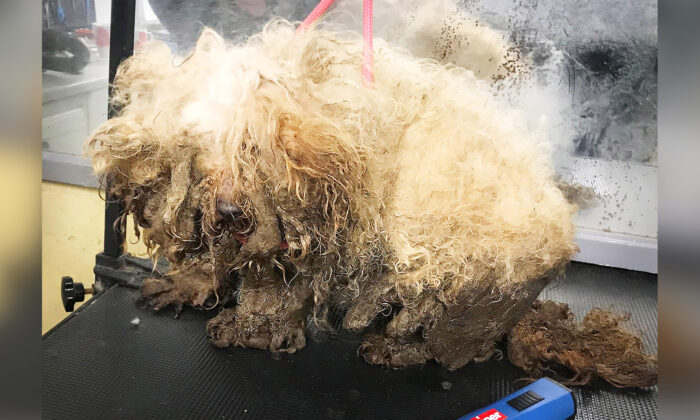 An animal welfare center in Nottingham has released shocking before-and-after photos of once-neglected dogs, now pampered pets, highlighting the incredible transformations of 30 animals. They were found emaciated with matted fur and rotting teeth and were delivered from their kennels.

Their new homes are a far cry from how they once lived.

The RSPCA of Radcliffe was alerted to the situation and sent rescuers to investigate some kennels in the Skegness area of Lincolnshire. There, they discovered 30 dogs left in terrible states, many covered in feces, or with fur so matted their breeds could not be identified.

Some of the dogs’ teeth were so rotted they couldn’t eat.

The animals were taken into RSPCA care and have since undergone amazing transformations under the loving hands of rescuers. After having their fur shaved and undergoing care, they are unrecognizable.

Monty, a 7-year-old poodle mix, looks like a totally different dog. He went from a filthy, frizzy puff-ball to a sophisticated-looking pup.

Tink, a terrier cross, looked like she came out of a jungle cave. Without seeing the transformative pictures side by side, it’d be nearly impossible to guess that she’s the same dog.

According to Ella Carpenter, manager at RSPCA Radcliffe Animal Centre, it took several hours to shave the dogs’ fur back.

“The matting had caused skin problems for some of the dogs, so they have been having regular baths while here,” she said in a press statement.

“Many also needed emergency dental work as their teeth were so rotten … some were struggling to eat properly and they were in pain,” she added. “In total, 80 teeth have had to be removed from 5 dogs and they are now on antibiotics and pain relief.”

On Jan. 21, Carpenter told Daily Mail that the staff at Radcliffe were brought to tears by the state of some of the animals.

“One dog was in such a state she had pus leaking from her mouth. It was so upsetting to see, it reduced the rescue staff to tears,” she said.

However, the staff are happy to see the animals making full recoveries.

“They have a new lease of life and are now able to move freely without experiencing the pain of those heavy matts, glued together with excrement, pulling and tearing at their skin,” she added.

The dogs are currently being rehabilitated and showered with affection by the staff at Radcliffe, who hope to see these fine pups rehomed as soon as possible.