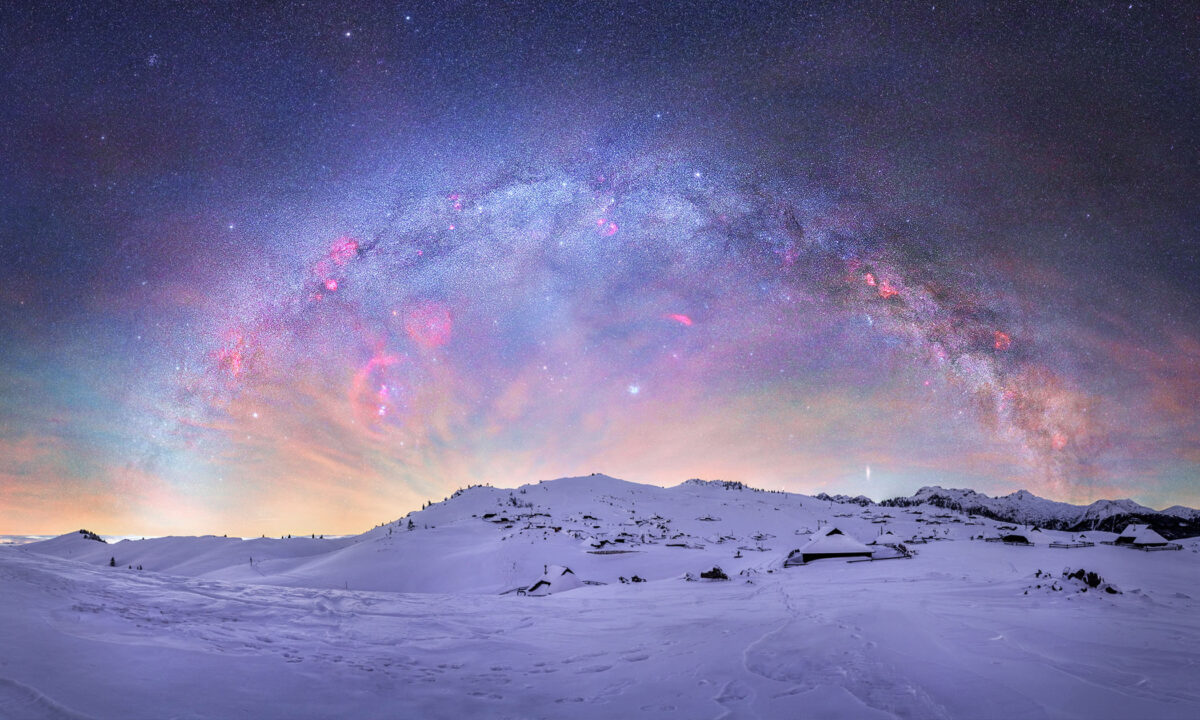 Uroš Fink fears not long treks in the freezing cold winter in meter high snow—not even in the dead of midnight; the 31-year-old astrophotographer from Slovenia is driven by a desire to take breathtaking images of our Milky Way.

The young engineer with a passion for shooting the night sky set out last December on one such excursion at Big Pasture Plateau, which yielded Uroš an award-winning image in the astro-landscape photography milieu.

He booked a cozy little hut on that particular plateau in the country’s northern region and, after much notetaking, planning, and scouting out the perfect composition during the day, he set out as darkness fell.

The timing that month would also be perfect to catch a cameo appearance by Comet Leonard, the brightest comet of the year, with its signature tail and fuzzy green glow as it sailed past planet Earth.

“My legs were tired even before I went out, but in the first place was motivation and a great desire to create beautiful images,” he told The Epoch Times of his foray. “I spent the whole night alone, far around me there was no living soul, just me, nature, and stars. It’s difficult to describe the feeling in words, but it was indescribably beautiful, a feeling of freedom, smallness, happiness. A feeling that won’t go out of my head for a while.”

Using his Nikon D600 Astromod, he shot the sky using a SkyWatcher tracking device in order to still the stars during a long exposure, and capture all the wonder and color the human eye cannot see, and the foreground separately to get the desired sharpness and detail. The two would later be blended together in digital postprocessing.

Slowly, night began to fade and Uroš realized he had to make the over-hour-long hike back to the hut. He’d already been awake for 24 hours; he could no longer feel his fingers in the minus-10-degree-Celsius (14-degree-Fahrenheit) cold; and it was a daunting trek back carrying his 35-kilo pack. “But I made it!” he said. “I don’t regret anything, actually I am more than happy that I did this amazing excursion.”

That excursion yielded these several stunning images shown here, as well as placement in the Milky Way Photographer of the Year 2021 award, presented by Capture the Atlas—choosing the very best in astro-landscape images from all over the world.

That is Uroš’s biggest achievement, he says. Besides that, he’s also placed third in drone in Drone&Astrophotography’s internationals salon in both 2020 and 2021. His images have also been featured by NASA and photography sites such as Nightscaper and Milky Way Chasers.