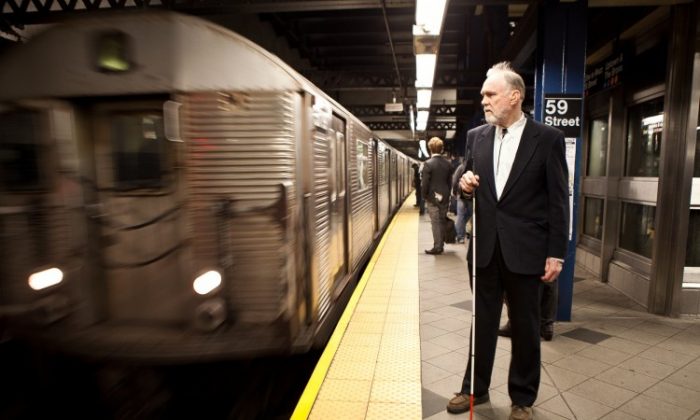 Karyl Berger shows how the color contrast of the buttons on the MTA’s new pilot help-point stations could be improved to assist the visually impaired. (Amal Chen/Epoch Times)
Life & Tradition

Imagine you were trying to overcome all these obstacles, but you could not use your sense of sight.

“It is so natural, I don’t even know how I do it. I am sure part of it is memory,” Ken Stewart said while touring Columbus Circle subway station on Tuesday. Stewart is one of the estimated 363,000 New Yorkers with severe visual impairment, according to VISIONS/Services for the Blind and Visually Impaired.

Stewart uses a long cane to help him get around the city, but his attention to a combination of visual, tactile, and audio cues are another asset.

He is legally blind but has extremely limited vision allowing him to see mostly color contrast and limited light. Stewart uses color contrast—the difference between light and dark—to help him differentiate between objects. “The color is not as important as the percentage of contrast—the higher, the better,” he said.

Background noises for sighted people, such as the flipping of the turnstile or swiping of a metro card, provided crucial audio cues for Stewart. They help orientate him, especially at stations he is less familiar with or stations with large open areas such as Columbus Circle or Times Square.

Detectable warning strips, the yellow bumps located at the edge of many subway platforms, provide a key tactile cue for Stewart, warning him where the platform ends.

Karen Gourgey, who has been blind since birth, also finds the value in the detectable warning strips. She is, however, disappointed that they are not yet in place at all stations. “In terms of the blind and visually impaired community, we need them in every single station—without exception.”

Gourgey, who is the director at the Computer Center for Visually Impaired People at Baruch College, CUNY, uses a guide dog instead of a long cane. “I like using the dog in the subways, especially if I am going to an unfamiliar station.”

In addition to helping her stay away from the edge of the platform, she has trained her guide dog to help her locate exits, turnstiles, and booths.

Levels of impairment in the visually impaired community vary. Karyl Berger, who works for the Permanent Citizens Advisory Committee to the MTA (PCAC), is legally blind, but is able to navigate the city without the aid of a long cane or guide dog.

During a tour of the No. 6 line at Grand Central Station on Monday, Berger demonstrated that despite the fact she did not need any aid to get around, cues such as having yellow markers at the top and bottom of stairs are vitally important. “It has helped me from falling down the stairs,” she said.

But like Gourgey, Berger noted these safety measures are not in every station, something she would like to see changed. “It’s those little kinds of things that help people navigate the system.”

The subway system is compliant with the Americans with Disabilities Act (ADA), signed into law by George H. W. Bush in 1990 to ensure fair access to public areas for people with disabilities, but all three visually impaired riders pointed to additional areas that would help their specific needs. Berger would like to see the MTA consult the visually impaired community on issues that go beyond ADA compliance. “If they did a little upfront work it would go a long way,” Berger said.

Despite some criticism, all agreed they would not want to live any other place. Gourgey was born in New York City but lived in several places in the Northeast and California for four years. “When I came back, it was like being free again,” she said.

Stewart said, “New York City is the most popular place in the whole United States to have a disability for a lot of reasons: public attitude, services, and transportation.”

Stewart pointed out people are always willing to assist him if he needs it. He credits the passing of ADA with changing the attitudes of people regarding people with disabilities.