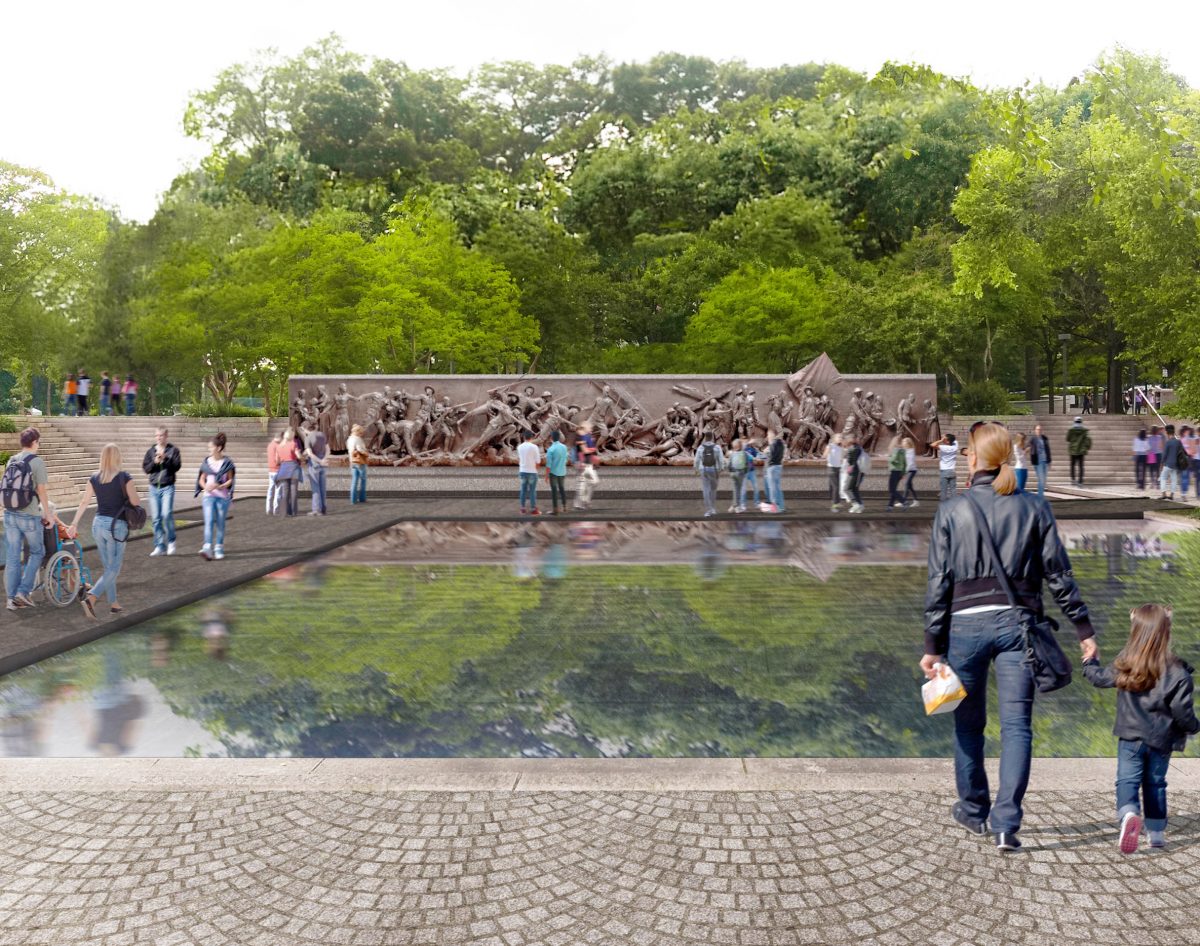 WASHINGTON—The war that did not end all wars, World War I, marked a dramatic turning point in history. It changed everything, including art. Collective trauma gave way to irony, cynicism, sarcasm, a taste for the absurd, and nihilistic disillusionment. The moral fabric of society and how it translated into art started to deteriorate at an alarming pace, until it reached the extreme where anything goes, as seen in some contemporary art today.

Now, 100 years after World War I ended, we begin to see glimmers of art that is more considerate, ennobling, trustworthy, respectful, and with a rational sensibility that is uplifting, even depicting subject matter that delves into the tragic nature of humanity.

On June 19, the design concept for a new National World War I Memorial—embodying all of such positive qualities—was unanimously endorsed by the federal aesthetic guardians of Washington, D.C., the U.S. Commission of Fine Arts (CFA). The approval marked a breakthrough not only for the World War I monument to be realized but also for the public presence of figurative art on the world stage.

Surprisingly, Washington does not have a memorial for honoring the sacrifice and victory of the American doughboys. Pershing Park, built in 1981, has the commemorative sculpture “John J. Pershing, General of the Armies,” but nothing on a scale that would truly honor the 4.7 million Americans who served and over 116,000 who were killed in World War I.

An act of Congress in 2013 created the U.S. World War One Centennial Commission (WW1CC) for planning and developing the memorial. The 12 members of the commission were appointed by former President Barack Obama, leaders of the Senate, the House of Representatives, as well as the American Legion, the Veterans of Foreign Wars, and the National World War I Museum and Memorial. All five former living presidents are serving on the commission as honorary chairmen.

In 2015, the commission selected the competition-winning team: architect Joe Weishaar, sculptor Sabin Howard, Land Collective, and GWWO Architects. Weishaar and Howard started to work on the design in January 2016. A year and a half may seem to be a long time for honing a design concept, but the design team had to reach a consensus with many people.

Although the memorial is privately funded, every step of the project has to be vetted by government agencies, including the CFA, the U.S. National Park Service, and the National Capital Planning Commission. That is because the memorial will be sited on federal land, in Pershing Park, with views to the White House.

As it stands today, Pershing Park, designed in the ’80s with a reflecting pool that has been dried up for over a decade, is in a derelict, seldom-visited state.

“A difficult challenge that we had to face was to agree on how the park would be used,” the sculptor, Sabin Howard said in a phone interview. “We had to consider, is it going to be just a park, or a memorial, or both? Is it going to remain a park that had been designed in the ’80s that has now fallen apart, or is it going to be the park that has been given congressional approval to make it into the National World War I Memorial park?” Howard said.

By the end of 2016, the architect Joe Weishaar had already presented several redesigns of the park to the WW1CC and the government agencies. Weishaar is responsible for designing all of the paving, the walkways, the reflecting pool and fountains, the base for the figurative sculpture designed by Howard, and all of the lighting. Final approval for the sculptural element of the memorial and how it would be integrated in the park would take more time.

Howard drew more than a dozen iterations of the sculpture design. The broad concept was endorsed by the CFA in May 2017. Shortly after the official groundbreaking ceremony in Pershing Park on Nov. 9, 2017, he completed a small-scale, three-dimensional model for the bas-relief sculpture. The design team would work on several more iterations and with the WW1CC would present them to the government agencies for a couple of hours every few months. That would create further discussion and refinement.

In the course of about a year and a half, the bas-relief bronze sculpture was shortened from 80 feet to 56.5 feet in length, and the 38 figures were shortened from as tall as 8 feet to about 6.6 feet. The placement of the relief would remain on the west side of Pershing Park, but it would move away from the terrace of the park to become a freestanding wall with water all around it.

The allegorical narrative of the bronze relief “A Soldier’s Journey” expresses both the individual and the collective sacrifice of the Americans who served, in a very accessible and compelling way that will also prompt the public to learn more about World War I and its significance.

“We confirmed for [the CFA] that in contrast to the various other alternatives that had been suggested in various quarters, the concept that they approved last year remained the best concept,” said Edwin Fountain, the vice-chair of the WW1CC, on the phone on July 26. “On the surface, it looks like we made the same decision [as last year], but we just needed some further thought and discussion that confirmed that original choice,” he said.

For Howard, meeting with the agencies was a tempering process. He had to hold on to his vision throughout the collaborative process with experts in other fields.

“I was basing what I thought the monument should look like on my experience of well over 35 years of creating figurative art. How do I bring that forward into the public arena without diminishing or diluting the message in a collaborative effort? How do you remain true to a vision with so many opinions swirling around when you make public art? That was my challenge,” Howard said on the phone.

For both Howard and Weishaar, the positive outcome of the July 19 meeting with the CFA was a sigh of relief. The WW1CC received 265 letters of support ahead of that meeting, compared to only four letters they had received in May last year.

“Getting this second approval puts us back on track. We are not hunting around in the dark anymore; we are moving in the right direction,” Weishaar said. “That’s not to say that there won’t be other changes moving forward, but they will be much smaller in scale.”

The commission plans to complete the construction of the World War I memorial at Pershing Park by 2021. “We hope to have the park itself largely completed by the end of 2019, and in an ideal world, we would have the sculpture in place by Nov. 11, 2021,” Fountain said. That date is significant in that it is the centennial of the internment of the Tomb of the Unknown Soldier at Arlington National Cemetery.

The design team now moves into the next phase of actually creating the memorial. “I feel the weight, the gravitas, and importance of what we have to accomplish,” Howard said. “Also, I think this is a really beautiful moment for figurative art. Honestly, I get goose bumps thinking about it, because I realize there is great power here, to make art full of spirit that is about what it means to be human. This has the potential to reconnect the public with art. Art that has sacred value.”