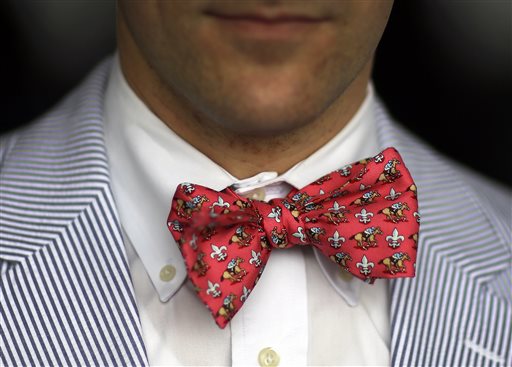 The bow tie has a long history. It was first used as a necktie in the 19th, and by about 1880, it became fashionable.

“Since its introduction and mass acceptance into men’s dress, the bow tie has experienced a great many changes in form and function and has transcended its purely formal and traditional stereotype. From street style, to the runway, to celebrity fashion, the bow tie has been reappropriated into a variety of different looks, breaking it free from the mold it once held as a purely formal accessory,” reads an excerpt from TheBowTie.com.

However, Croatian soldiers apparently wore a similar type of tie during the Thirty Years War, which lasted from 1618 until 1648.

Here’s a few quotes about the tie:

“When you wear a bow tie, doors open for you. Your posture is a little more erect; your shoulders are a little further back; your style is a little more dynamic. It’s about the reestablishment of the gentleman.” — Dhani Jones

“To its devotees the bow tie suggests iconoclasm of an Old World sort, a fusty adherence to a contrarian point of view. The bow tie hints at intellectualism, real or feigned, and sometimes suggests technical acumen, perhaps because it is so hard to tie. Bow ties are worn by magicians, country doctors, lawyers and professors and by people hoping to look like the above. But perhaps most of all, wearing a bow tie is a way of broadcasting an aggressive lack of concern for what other people think… A list of bow-tie devotees reads like a Who’s Who of rugged individualists: Theodore Roosevelt, Charlie Chaplin, Winston Churchill and Fred Astaire wore bow ties, as did Senators Daniel Patrick Moynihan of New York and Paul Simon of Illinois.” — Warren St. John, New York Times

“Wearing a bow tie is a statement. Almost an act of defiance.” -Rick Kaplan, who was a former TV news producer at ABC, CBS, CNN, and MSNBC