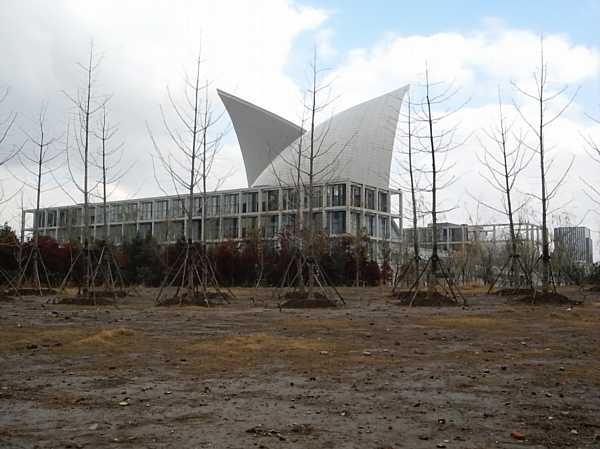 The first thing that many visitors to Shanghai will see is a ghost city. If you look down out of the window when flying into Shanghai’s Pudong airport from the south, right at the point where Hangzhou Bay and makes landfall, you will see a nose-like protrusion of land sticking out into the water. On the tip of this nose is a strange assemblage of concentric circles radiating out from a perfectly circular lake. If you hear your fellow air passenger’s exclaiming, “What is that place!?!” their reaction is appropriate: no other city in the world looks like Nanhui. As you curiously peer down you will not see many people, cars, or signs of life. This is not because the people are hiding, it’s because they’re not there yet. Nanhui is another of China’s full scale new cities that are being built from scratch, ever expanding the frontiers of urbanization.

This circular city, which formally went by the names Luchao Harbor City and Lingang, is a $5.6 billion satellite development 60 km from the core of Shanghai in the far southeastern corner of Pudong. It was built for one reason: to serve as an urban center to support the nearby Yangshan Free Trade Zone, which includes the Yangshan Deep Water Port and the Lingang Industrial Zone. The economic sparks caused by these catalysts are expected to eventually bring 800,000 people into Nanhui by 2020, turning it into a commercial and tourism epicenter on an otherwise uneventful coastline.

I boarded a bus at the Longyang metro stop in Pudong bound for Nanhui. I got on a bus that was crammed with students and rode past farms, magnificent three to five story rural villas, construction sites, patches of trees, stagnant canals, quaint Europe-esque town centers, and a shear overabundance of completely deserted new housing complexes and empty strip malls. The place is out there. Halfway through the ride it became apparent that Nanhui is in no way connected to Shanghai other than administratively. It is a new city in it’s own right in a place that has always been a backwater — or, more accurately, underwater.

A decade ago, beneath the coaxial circles of Nanhui was nothing but ocean. Since Shanghai began refacing itself a couple of decades ago, over two million residents have had their homes demolished and were relocated. 70,000 farmers had already been chased out of their homes to build the nearby Lingang Industrial and Logistics Zone. Relocations are always a costly maneuver, financially as well as socially, but fresh development land is incredibly valuable. So Shanghai decided to just make more land. In 1997, a dam was built off the coast which acted as a trap for soil deposits coming out of Hangzhou Bay, and the area in between silted up on its own. It only took five or six years for enough land to be reclaimed to build the new city on. “Farm land is extremely precious,” the director of architecture firm that designed Nanhui told me, “especially along the coast where the cities are growing. So it seemed to make sense to build into the sea.” 45% of Nanhui’s 133 sq km is on reclaimed land.

I stepped off the bus onto this man-made land outside of Shanghai Maritime University, which sits just beyond Nanhui’s outer ring road. The emptiness out there was more jarring than the cold December sea breezes which slashed unimpeded across miles of golden fields. In the distance there was a small white city hovering saucer-like between blue sky and brown wetlands. Ivory colored mid-rise towers and apartment blocks bulked up its central area but quickly tapered out at both sides into green construction sites, then nothing. There was nothing between me and the city besides grasses, sedges, and reeds.

Construction on Nanhui began in 2003 and is set to continue until 2020, and even from my vantage point far outside of the downtown area, it was clear that I was gazing out upon an unfinished product. Most of this city had not yet sprouted above the surface. As with most of China’s new cities, what you look upon today is hardly a rough sketch of what these places will be in the near future. They are works in progress, places becoming places.

“The inspiration was the image of a drop falling into the water and these circles create the structure of the city,” a project manager from GMP told me. Three concentric ring roads encircle a 2.5 km wide man-made lake with radial streets and canals connecting them all together. Throughout the rings, seashell-white buildings vacillate with verdant green parks, while waterways cut their paths out from the central lake, making the place looks like a fancy compass rose if viewed from above. Capacity for 800,000 residents is being constructed.

In every way this place is not only meant to be an urban center but a monument. These places are built up from nothing on a singular plan, often with the intention of creating a quasi-utopia that is virtually the opposite of the old cities they are designed to replace. If any country has enough data on how cities shouldn’t be, it’s China, and their new cities are often reactions against the engineering mishaps of past eras of development. Nanhui is a planned city in every sense, it is like someone drew an urban plan on a giant piece transfer paper and pressed it down upon the land. The result is in an urban landscape that is unlike anything humans have ever built before, and is as much a work of art as it is a city — and it shows the power of a country that can do things like this. The question is whether anybody wants to live in such a place.