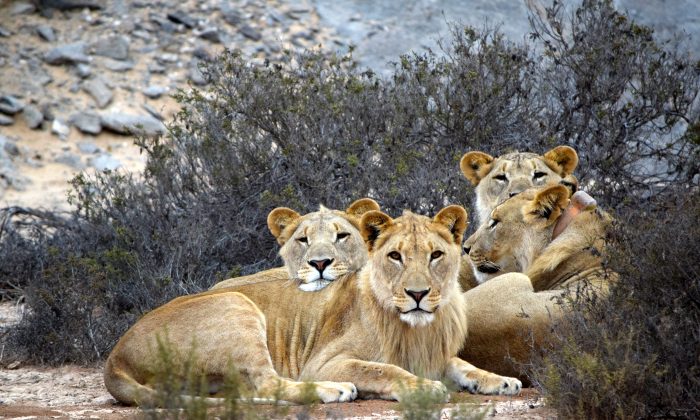 A lioness and her three grown cubs lie huddled together, each wearing a radio collar that stores data on their whereabouts and habits. They are members of the the Hoanib Floodplain Pride, which is monitored by the Desert Lion Conservation Project. Wildlife numbers are low in the Hoanib River area and the lions have to walk long distances to find prey. (Giannella M. Garrett)
Destinations

Namibia, the first country to include an environmental clause in its constitution, celebrates 25 years of independence in 2015 with spectacular landscape and unique wildlife treasures.

Our guide navigates the Land Cruiser through a broad, desert valley, past craggy basalt ranges. There are four of us: Gert, who sits behind the wheel, myself, and two other guests from Wilderness Safaris’ Hoanib Skeleton Coast Camp.

We are in remote, northwest Namibia. I arrived this afternoon on a six-passenger Cessna, the only way to access this rugged, otherworldly outpost, after having spent 10 days touring the country’s more accessible sights.

We are on a mission, en route to the coast. A pride of desert lions has been sighted less than three hours from our camp, and we have barely three hours of sunlight left to find them.

Northwest Namibia’s desert-adapted lions have earned international fame for inhabiting the driest and harshest desert in the world.

I have long dreamed of seeing lions in the wild, but these aren’t your average lions. Northwest Namibia’s desert-adapted lions have earned international fame for inhabiting the driest and harshest desert in the world.

It’s personal, too. With big cats on my mind here, part of me is still at home where one of my three 17-year-old domestic cats was diagnosed with terminal lung cancer. Communicating back home during my travels has been spotty. I fear the worst.

But it’s impossible to fret very long given this arid paradise before me. Gert drives along the steep banks of the Hoanib River, then down into its sandy riverbed. We bounce over the rough track, ogling the crusty landscape. Towering acacia trees line our path, creating a ribbon of green along the riverbanks. Small herds of springbok eye us curiously, then dash off, kicking up clouds of dust.

A desert elephant balances on its hind legs, trunk raised, and grabs a thorny branch from an ana tree, stuffing it into his mouth. The animals in this harsh environment have learned to adapt to its frugal bounty.

Eventually, the riverbed empties into a bare pan. Gert tells us that in the spring rainwater collects here. In a few months, big game will flock here to quench their thirst and graze.

We step outside the vehicle to exercise our legs over the mosaic of hardened, mineral-rich clay. A pile of rocks in the stark distance resembles a spaceship. An auger buzzard soars overhead, reminding us that time is flying.

We have not encountered a single vehicle, or seen a trace of another human since we left camp.

As we drive westward, the floodplains transform into a sea of ivory dunes. A cold wind carries a fragrance. “Wild sage,” says Gert. We shiver as the sun descends. Vegetation is sparse, shrubby and weirdly beautiful. Enthralled by the ever-changing landscape and humoured by the bone-rattling ride over stones and scrub, we have momentarily forgotten about the lions.

Without warning, Gert jams on the brakes.

“Okay,” he commands in a whisper. “No screaming, no sudden movements. Do not hang your arms or heads outside the windows.” A knot tightens in my belly. Gert starts the motor and inches around a thick patch of shrubs. We see what he already knows is there.

A lioness and her three grown cubs lie huddled together in a golden mound. The cubs yawn and primp each other while the mother sleeps. Each wears a radio collar that stores data on their whereabouts and habits. Lion researcher Dr. Philip Stander and his team at the Desert Lion Conservation Project (DLCP) have been collecting and monitoring desert lions since 1998.

A population near extinction in the mid-1990s thrives today. This is due to “Queen,” scientifically known as xpl-10, the mother of the lioness before me. At 16, Queen was one of the oldest lionesses with the most reproductive success in today’s desert lion population. Last May, she died attempting to kill a giraffe.

Two males, “Rosh” and “Terrace Male,” were shot in July and August for allegedly killing livestock. DLCP’s work also involves convincing the surrounding communities that the benefit of living with wildlife exceeds their threat.

In a hushed tone, Gert tells us that the lions we see are members of the Hoanub Floodplain Pride. The cubs belong to a group nicknamed “The Five Musketeers.”

The lioness awakens and gazes directly at us as our vehicle inches closer. I’m enchanted and terrified. Making a quick mental calculation, I conclude that a lion intent on leaping in might fit through the opening next to me.

The mother stands up and glares at me, as if she’s considering being part of my worst nightmare. She steps in front of the cubs defensively, then lies back down. She keeps her focus on us while the cubs snuggle each other. One nuzzles his chin against her back. Her eyes close for a moment, then snap open again, looking dead straight at me. Don’t think for a minute I’ve forgotten you.

“We’re very lucky,” Gert whispers. “Not everyone gets to see these desert lions.” They look gaunt and hungry, he explains, because they haven’t eaten for two days. He said they were waiting for another member of the pride to join them before moving on.

The lioness stands up and ambles towards us. I notice the empty seat behind Gert’s. I bet I could dive under there and tuck myself beneath it. I hate myself for selfishly scheming my lone rescue strategy.

Gert rolls the vehicle forward slowly. She follows. My mind drifts to my cats back home. Three siblings born in my yard when I lived in a beachside community in Sardinia, an area overpopulated with homeless cats. Fearing for their safety, I brought them back with me when I returned to New York.

The Land Cruiser stops and I snap to reality. The lioness is now 20 feet away, still focused on us while the cubs remain in the patch behind her. I feel a strong bond with this lioness and her protective nature.

A bird flies by. She diverts her attention toward the sky. Click. The shot of her looking up, far away in the distance is my favourite photograph of the day.

Just before the sun sets Gert revs up the engine for the drive back. The three cubs and their mother trot behind us. We watch them stop and gaze as we disappear around a bramble of shrubs.