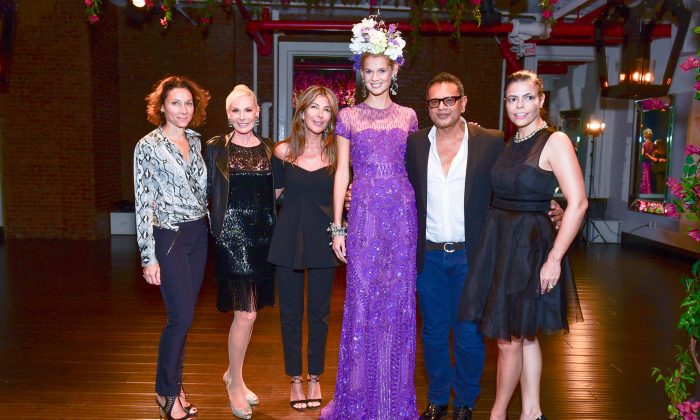 Celebrated designer Naeem Khan has been a longtime supporter of the Alzheimer’s Association’s Rita Hayworth Gala. Recently, he has cemented his commitment to the cause by designing a custom gown in purple, the official color of the Alzheimer’s awareness raising campaign.

Before unveiling the dress, Khan said that the fashion industry has not done enough for the Alzheimer’s cause. Herbert expressed her hope that the collaboration, called the “Purple Dress Partnership,” is the first of many dresses.

Khan became interested in supporting the cause after witnessing the prolonged suffering of a dear friend.

“This is a cause that is close to my heart because a very dear friend of mine suffered for many, many years from  Alzheimer’s,” he told Epoch Times, explaining the impact on him as he witnessed his friend’s mental deterioration from the illness. Khan has since lost many other friends to the disease.

The dress will be auctioned at the Alzheimer’s Association’s Rita Hayworth Gala on Oct. 27. The opening bid for the dress will begin at $5,000, and the suggested retail price is $12,000.

“The dress took hundreds of hours to make and it is one of my signature dresses. It is a fantasy garden—you have the river, the flowers, the sky with the stars, so it’s the world in there,” said Khan.