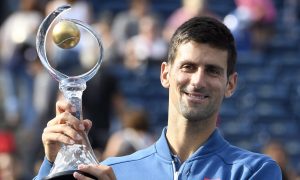 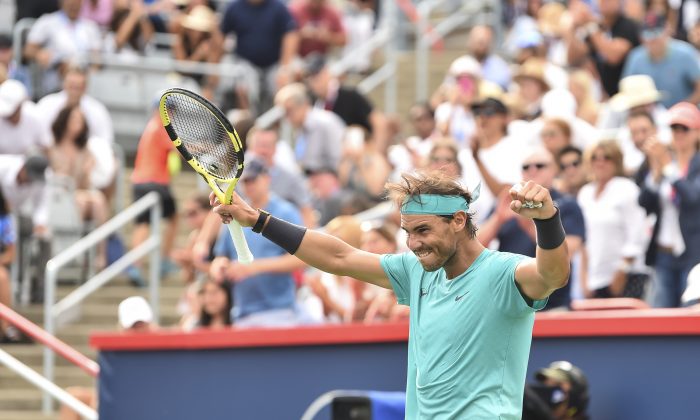 Rafael Nadal of Spain celebrates his 6-3, 6-0 victory over Daniil Medvedev of Russia during the mens singles final of the Rogers Cup at IGA Stadium on August 11, 2019 in Montreal, Quebec, Canada. (Minas Panagiotakis/Getty Images)
Tennis

MONTREAL—Rafael Nadal gave rising Russian superstar Daniil Medvedev a tennis lesson in the Rogers Cup final with a comfortable 6–3, 6–0 win on Aug. 11. In a match that started out highly competitively with Medvedev getting a break point on the superstar’s opening service game, the Spaniard eventually got through unscathed and proceeded to dismantle the 23-year-old.

“I think I played a good first game too,” Nadal said explaining how he changed the rhythm of play and directions during the points thereafter. He also added that his slice worked well. “I played smart.”

Medvedev started out like a brick wall with a cross-court backhand that seemed impregnable. But Nadal is a problem-solver on the court. He came to the net and turned the tables with Medvedev getting caught at the net himself.

Nadal got the break to go up 3–1 and never felt any more pressure from the young Russian in closing out the set.

The battle was won in the opening game of the match and after that Medvedev had no answer to Nadal’s relentless groundstrokes.

“I think I played my best match of the tournament so far without a doubt,” Nadal said in an on-court interview with TVA Sports after the match.

Medvedev was on his heels after the first game of the match, but he said he was ready for the pressure.

“I was kind of ready for it. I didn’t manage to probably show my best tennis. Rafa was I think incredible today. I need to do better next time,” he said.”I think it’s the best week of my career.”

Nadal was the only one of the “Big Three” of men’s tennis to take part in the Rogers Cup as Roger Federer and Novak Djokovic did not enter. Since 2005, the trio has now won 92 of the 132 Masters 1000 titles (70 percent).

“They have something inside of them in their game better than all of us,” Medvedev said.

And remarkably, at least of one of them is the greatest champion of all nine of these events, which rank just behind the four grand slams in terms of importance on the tour. Thus Nadal was the overwhelming favourite for this tournament and he delivered. He now has five Rogers Cup titles—one more than Djokovic.

But it was also a fabulous week for Medvedev who was a huge hit with the Montreal tennis faithful, not just for his dominant game, but also for his fluent French.

The lanky Russian was facing Nadal for the first time and it happened to come in the biggest match of his young career.

“Yeah, of course it’s extra special. I played Novak [Djokovic] and Roger [Federer] a few times, both of them already. It’s different, I have to say. Yeah, there is some extra pressure,” he said after beating countryman Karen Khachanov in the semifinal on Aug. 10.

It’s was a dream come true to face a player he had been watching as a youngster, but he said he wasn’t going to be intimidated.

Coming into the final, Medvedev was leading the tournament in first serve points won (89 percent) and second serve return points won (64 percent). He also led the field in winning half his games as returner. The hallmarks were there for a tight final, but experience was a big difference when Nadal got the lead. He never let it go.

Nadal got a free pass into the final when Gael Monfils withdrew due to an ankle injury after a heroic third-set tiebreak quarterfinal win. The Frenchman got shafted by the rain and would have had to play the semifinal a couple hours after his gutsy quarterfinal win.

Nadal previously said he is happy with the way he is competing and enjoying his tennis. He admitted he’s not playing his best tennis ever despite what the results may say.

“I am how I am today. I’m having a good season more or less, being competitive almost in every single event that I have been playing,” he said after beating the talented Italian Fabio Fognini in the quarterfinals. The Spanish legend has played 10 tournaments in 2019 and reached the semis or better in nine of them.

Federer may hold the most grand slam titles, but Nadal owns the most Masters 1000 titles with 35 and he passed the Swiss legend in Masters 1000 wins with 379 after beating Guido Pella in the third round. The Spaniard also surpassed Federer in reaching his 51st tour final.

The Rogers Cup is the third-oldest tennis tournament in the world; it has been around since 1881 with just Wimbledon and the U.S. Open having longer histories.