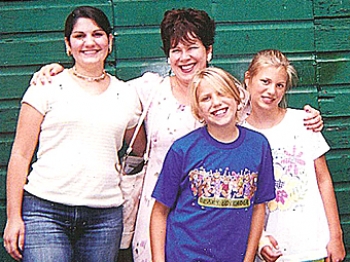 You Can Go Home Again (If Home Is Camp)

By Joyce Faiola
biggersmaller
Print
Back in the times before parents became their kids’ chauffeurs, I (like most 10-year-olds) suffered through boring days of hanging around the house. Camp rescued me from the drudgery of helping to hang out the wash, cleaning my room, and trying to collect enough soda bottles (1 penny per) to afford ice cream (cones cost 5 cents). Camp meant excitement, espionage, and a certain kind of joie de vivre that came with being 200 miles from home.

The trip seemed like an endless car ride of sappy sing-a-longs and baloney sandwiches highlighted by hourly stops at HoJo to use the loo and purloin mints from the cashier.

Arrival meant a sleepless night spent conjuring conspiracy theories to inflict on our snoring counselor and camp director. I was always with of a cabin of fellow rebels, who vowed to become the infamous mischief-makers of the camp.

My favorite memories involved short-sheeting the camp director’s bed, filling the bedroom slippers of the meanest counselor with frogs, flying my best friend’s training bra from the camp flagpole and watching everyone salute it, and stuffing the camp nurse’s medical bag with marshmallows. Oh yes, my fellow cabin mates sure missed me the day I left!

One year, my friend and I decided to take a midnight swim au naturale. Flashlights in hand to light the way, we crept to the lake. Dumping our clothes on the shore, we dived in and on that sultry hot night in August it was sheer heaven. Suddenly there was a booming voice from the shore, and a powerful light illuminated us. Yikes, the camp security guard!

“Come out of there young ladies,” he bellowed.

“We are not wearing our bathing suits!”

Somehow we swam ashore, dressed hurriedly, and made it back to the cabin and the most peaceful night’s sleep ever. Of course, we had so many demerits by then that this escapade didn’t matter. We had become legends!

Recently visiting my niece at that same camp, I drove down the still-rocky dirt road past the weathered remains of what used to be the shuffleboard court and the pathetic six-hole miniature golf course. Nothing had changed; but now, rather than my Shangri-La, it all looked so small and messy!

Rather than cozy cottages, claustrophobic cabins dotted the hilly terrain. Nearby were the smoldering timbers of the previous night's campfire, site of many gooey S’mores and blistered hot dogs.

And whatever happened to Popsicle stick breadbaskets and birdhouses? Now it was hemp bracelets, leather-tooled photo frames, and copper candleholders. It looked like Pottery Barn.

The lakefront panorama took my breath away. When you're a kid, the lake’s where you swim; when you're 50, it's multimillion-dollar real estate perfect for luxury condos.

The flagpole was still there, where after the morning bugle every camper would appear at 7:00 for calisthenics (now called aerobics). I was often an absentee, feigning a sudden asthmatic condition. One year a group of campers crept into my cabin, picked me up—mattress and all—and tossed me into the lake. My niece remarked that if anyone did that now, they would be banished for “Behavior detrimental to the welfare of other campers.”

The old redwood mess hall looked like it was ready for the wrecker's ball and I could smell signs of—could it be? Sloppy Joes? The dinnertime gong sounded and we marched into the time-warped hall. The free-for-all of campers I recall pushing to grab a cafeteria tray was now orderly calm with tableside service carts of offerings. I felt cheated; where was the madcap fun, the camp mayhem?

I looked around; no one was eating. Someone said, “I can't eat this stuff.” (It turned out to be meatloaf.)

My ears perked up. One girl suggested they go back to the kitchen and make the cook eat it. Suddenly, the whole table was buzzing as they plotted what to do with the meatloaf, asking who would lead the midnight kitchen raid for bread and peanut butter.

My heart sang; I raised my hand to volunteer. Thankfully, some things never change!

Humorist and freelance scribe Joyce Faiola is a consultant/designer for the hospitality industry and lives in Connecticut. Her e-mail is JLFaiola@Juno.com