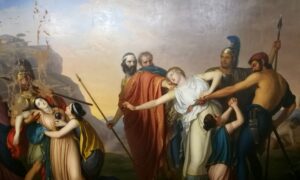 And Still She Speaks to Us: Truth and Beauty in 'Antigone'
0
Share Now
TelegramFacebookTweetEmailTellMeWeReddit
Copy Link 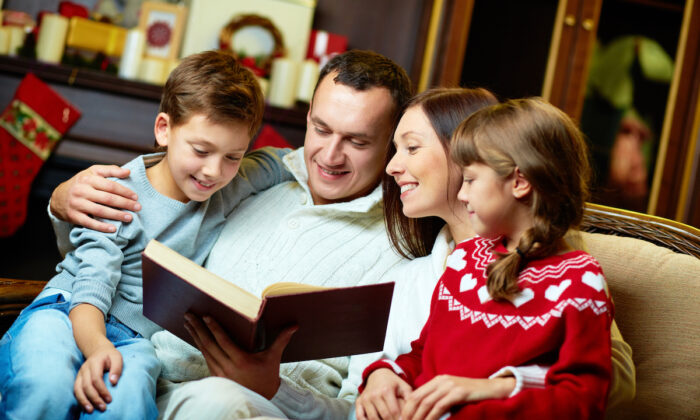 These are the sort of poems our not-so-distant ancestors, men, women, and young people once read aloud in the evenings in the family parlor. (Pressmaster/ Shutterstock)
Literature

My Literary Dig: An Exploration of ‘The Best Loved Poems of the American People’

The past is a foreign country; they do things differently there.
L.P. Hartley, “The Go-Between”

There it sat on my sister’s bookshelves, a duplicate of the book I’d thumbed through frequently in my teenage years, “The Best-Loved Poems of the American People.” I pulled the anthology from the shelf, noted the yellowing of the top edge, opened it, and read the inscription: “Merry Christmas, Penny. 1970. Mom and Dad.”

The majority of these poets, however, were strangers to me, long gone to the grass of graveyards. Who was this John Bennett, author of the lovely “In a Rose Garden”? Who was Alice Carey, who wrote so tenderly of her little brother’s death in “Among the Beautiful Pictures”? Why were we unfamiliar with Louisa Fletcher’s “The Land of Beginning Again,” whose words might yet assuage sadness and regret?

As I held that book with its golden cover adorned by peacocks and American flags, an idea came to me. I would treat “The Best Loved Poems of the American People”—referred to below as “Best Loved Poems”—as if I were an archaeologist on a dig who, having just discovered a buried palace, sets out to learn its past and unlock its meaning. My tools would be the anthology I held in my hand and the internet.

Here are some of my findings.

In 1936, Doubleday editor Hazel Felleman and writer Edward Frank Allen published “Best Loved Poems.” Publication constituted an act of enormous hope and optimism, for the audience at which they aimed this hefty volume of 575 poems and 670 pages was suffering through the Great Depression, with an unemployment rate that year of 16.9 percent. There is something touching and noble in Doubleday’s risky venture, something ineffably American to bring out such a book when so many were struggling to put food on the table.

In his Introduction, Edward Allen writes “In a sense, this book has been edited by the American people who love poetry.” Those same people demonstrated that love of poetry by buying the book—not just then, but up to our own time. “Best Loved Poems” remains in print after 83 years and has sold more than 1,500,000 copies. It has 182 customer ratings on Amazon, with the great majority of them positive. (The negative ones criticize the damaged condition of the book received.) Here is part of one of those reviews:

“When the courtship started with my wife her attitude was ‘flowers are nice, but if you’re really interested in me then read poetry with me.’ So was set in motion a precedent throughout our marriage that she would recite poetry to me from this book. Thus, it was in her final months of brain cancer, when she could not speak or feed herself, that myself and my mother would sit at her bedside and read to her from this book (that has her inscription, in her own writing, in it from 1974). If you’re in love with someone, buy this book.”

I next mulled over the organization of “Best Loved Poems,” which the editors had grouped by topics, and realized that some of the titles of these sections suggested radically different values from our own. “Faith and Reverence,” “Home and Mother,” and “Patriotism and War” come from a time when faith, home, motherhood, and patriotism were not topics for debate or institutions in decline, but instead bespoke traditional American virtues with no need for further justification.

The poems themselves wear this face of confident tradition. In this collection, we find no modernists like T.S. Eliot or Ezra Pound, no free verse, no experiments with form and language. No—the writers featured in “Best Loved Poems” work within the framework of verse, using as their templates meter, rhyme, and rhythm. And unlike so many of our moderns, these poets aim to stir our hearts, not to make us fret and puzzle over the meaning of a line or verse. Here, for instance, is the last stanza of John Bennett’s “In a Rose Garden”:

A hundred years from now, dear heart,
We’ll neither know nor care
What came of all life’s bitterness,
Or followed love’s despair.
Then fill the glasses up again,
And kiss me through the rose-leaf rain;
We’ll build one castle more in Spain,
And dream one more dream there.

Here are the opening lines of Louisa Fletcher’s “The Land of Beginning Again”:

I wish that there were some wonderful place
Called the Land of Beginning Again
Where all our mistakes and all our heartaches
And all of our selfish grief
Could be dropped like a shabby old coat by the door
And never put on again.

My archaeological adventures also uncovered a quality running through “Best Loved Poems” that beggars any one-word description. Whatever the topic—romance, death, love of country, motherhood—these poems, even the ones some might deride as overly sentimental, have the power to rouse emotions and thoughts common to all. These are the sort of poems that our not-so-distant ancestors, men, women, and young people once read aloud in the evenings in the family parlor, both for the pleasure of the rhyme and beat of the verse, and because the poems go to the roots of who and what we are. Which of us, for example, has not experienced the regrets expressed by Mary Carolyn Davies in “If I Had Known”?

If I had known the trouble you were bearing;
What griefs were in the silence of your face;
I would have been more gentle and more caring;
And tried to give you space.
I would have brought more warmth to the place,
If I had known.

If I had known what thoughts despairing drew you;
(Why do we never try to understand?)
I would have lent a little friendship to you.
And slipped my hand within your hand,
And made your stay more pleasant in the land,
If I had known.

Finally, through the wonders of our electronic world, I discovered that most of these forgotten artists and many of their other poems could be found on the internet. These poets may have faded from living memory, but devotees of their work have kept them alive online, where they patiently await our coming and our homage.

The Amazon reviewer mentioned above wrote, “If you’re in love with someone, buy this book.” I would add: If you’re a lover of words and verse, of tradition, and of America, buy “The Best Loved Poems of the American People.”