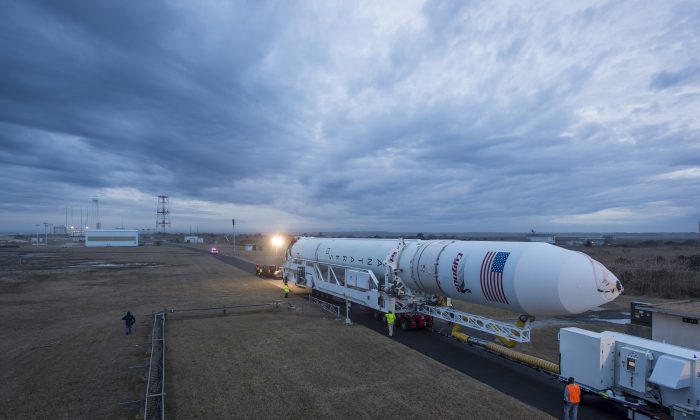 A rocket carrying cargo to the International Space Station recently launched from the Mid-Atlantic Regional Spaceport in Wallops Island, Virginia. I was lucky enough to be a part of it through NASA’s social media program. Here’s how I came to be there, what I experienced over this nearly 2-month process, and some recommendations if you’d like to give it a try yourself.

I’m a structural engineer, father of two with a casual interest in space, and I have a few social media accounts, so naturally, I follow NASA on Twitter and Facebook. One day in November, I noticed a NASA tweet inviting the general public to submit applications to take part in a rocket launch scheduled for Sunday, Dec. 15. I took a few minutes, filled out the application, hit send, and promptly forgot the whole thing.

Imagine my surprise when on December 4, I received an email from NASA saying I was accepted to the launch, now set for Tuesday December 17. I was excited but immediately concerned about the difficulty of pulling it off. A Tuesday launch meant missing some work, December 17 is only a week before Christmas, and I hadn’t even mentioned this to my wife and family yet!

Opportunities like these are once in a lifetime, though, so I started tackling the issues. I spoke to my wife who recognized it as an excellent learning opportunity for the children and was eager to make it a family trip. Next I made arrangements with work for 2 or 3 days off on short notice. I work at the family business so everyone is very understanding, however, I was going to have to work long hours from home to meet a critical deadline before leaving for the launch.

With these hurdles cleared it was time to start talking about it on social media. The response I got was overwhelmingly positive. My first Facebook announcement received over 90 likes and 36 comments. Clearly friends were excited over opportunity and were looking forward to following my family on the journey.

What Is a “NASA Social” Anyway?

NASA understands social media. They are leaders in using it to bypass traditional media outlets to engage with the public directly.

NASA Twitter accounts @MarsCuriosity and @Asteroid Watch, with 1.4 and 1.1 million followers respectively, are two of the government’s most popular Twitter accounts, according to a November 5 GovernmentExecutive.com article.

One of the ways NASA engages in-person with their enormous following is through hosting events at their facilities that they call NASA Socials. This particular NASA Social event was centered around the launch of the first commercial cargo resupply mission to the International Space Station.

Orbital Sciences, a Dulles, Virginia-based company, would launch their Antares rocket carrying their Cygnus capsule to resupply the ISS and NASA invited 50 applicants to not only see the launch but to have the same VIP access as traditional journalists. Included in the Social were a tour of the Horizontal Integration Facility (where the rocket components are assembled), a launch pad tour, participation in televised mission briefings, and front row seats to the launch itself. I couldn’t wait!

Almost immediately the delays started. On December 9 NASA announced a one-day slip in the schedule due to minor rocket assembly issues, revising the launch date to December 18. Then there was a problem with ISS that delayed the launch to Thursday, December 19. Next, late in the afternoon of December 17, less than 24 hours prior to scheduled NASA Social events, NASA announced the ISS problem had not been solved and the launch was delayed to mid-January.
Meanwhile, the ISS astronauts would be performing a space walk to fix the problem.

Back here on Earth, my family booked and canceled hotel reservations, packed and unpacked bags, updated work schedules, and kept friends and family updated via social media all through the process.

Christmas and New Years came and went, and the ISS spacewalks went well and repairs were made. NASA communicated a new launch date of Tuesday, January 7. So we rebooked with the very accommodating Best Western in neighboring Chincoteague, Virginia and started repacking.

As luck would have it, a once-in-20-year weather phenomenon was the next cause of delay. The much talked about polar vortex was predicted to sweep across the United States on the very day of the launch. Orbital’s rocket has a minimum launch temperature of 20 degrees F, so the launch was pushed back yet again to Wednesday, January 8.

Finally, on Monday evening, January 6, my little family and I set out on our 5-hour road trip from our home in New Jersey just as the polar vortex descended upon the country. At the start of journey, our car’s dashboard thermometer read 34 degrees: when we arrived at the hotel it read only 16 degrees: Brrrrr!

After all the delays, it was a little hard to believe that the day had actually come, but indeed it had. At 11 a.m. Tuesday, Jan. 7, my wife and children dropped me off at the bitterly cold NASA Wallops Island Flight Facility Visitors Center where I signed in and met my fellow “NASA Socialites.“ A few moments later we were bused to the Horizontal Integration Facility (HIF), about a 30 minute ride from the Visitor Center. There we were met by Orbital’s Kurt Eberly, Deputy Manager of the Antares rocket program who explained the various rocket components on display.

A surprising fact learned here is that Antares’s first stage engines are actually 40-year-old, left-over Russian NK-33 engines. They were designed and built in the late 1960s and early 1970s and were intended to power the Soviet Union’s manned moon rocket. The Russians never sent men to the moon, though, so the engines went unused for decades. After the fall of the Soviet Union, California based Aerojet Rocketdyne acquired several of these engines. They recently contracted with Orbital to power the Antares rocket’s first stage. Aerojet made several enhancements to the engines including adding a gimbal block for trust vectoring capabilities, new electrical circuitry, and they renamed it the AJ26.

After the amazing HIF tour, what had been billed as a launch pad tour turned out to be a bit of a disappointment. Our bus parked about a quarter mile away from the launch pad where we braved the below zero wind chill temperatures to take a few fleeting pictures of Antares on the launch pad behind blowing reeds.

Then it was back to the visitor center for a televised science briefing. I planted myself second row center where I had a great view of the action. NASA Public Affairs Officer Trent Perrotto introduced Tara Ruttley, Associate Program Scientist for ISS, Patrick O’Neil, Center for Advancement of Science in Space (CASIS) Spokesman, Lewis Zia, BioSearch Technologies, and Peter Platzer, Founder and CEO of NanoSatisfi.

I was impressed with Mr. Platzer’s presentation. His San Francisco-based company NanoSatisfi has developed small satellites with the goal of offering affordable access to space for everyone. They significantly lowered the cost to space through standardization and using commercially available components, giving students the opportunity to run space-based experiments. Several of their small satellites, called Ardusats, were launched to the ISS on the Antares rocket and will be pushed out into Earth orbit by ISS Astronauts.

Solar Flare Causes Yet Another Delay

I woke up on launch morning to another stunning delay. A large solar flare had erupted from the surface of the Sun the previous evening, and Orbital made the decision to delay the launch at least one day to Thursday, Jan. 9 to further study the problem. When asked whether something like this had ever delayed a launch before, Orbital’s executive vice president and chief technical officer Antonio Elias said on a teleconference: “Concern about these issues is relatively recent. A few years ago, neither ourselves nor others would really bother to look at space weather as a launch constraint.” Translation: this is a first!

So after discussions with work and family, we decided to stay one more day in the hopes the launch would proceed on Thursday. We took advantage of our new found time together by exploring nearby Chincoteague National Wildlife Refuge. By now the bitter cold of the polar vortex had started to recede and temperatures had crept up into the low 30s and the winds had abated. We did some winter hiking and enjoyed seeing and hearing a pair of juvenile bald eagles flying overhead, a special thrill for my 7-year-old aspiring ornithologist son. We also hiked to the Assateague Island Lighthouse, where we realized that at 142 feet tall, it is only 9 feet taller than the 133-foot Antares rocket, offering us some valuable perspective.

I was pleased to learn on Thursday morning that we were finally GO for launch! My wife and kids dropped me off at the Visitor Center again where a bus brought me the media viewing area 1.8 miles away from the launch pad. I feverishly took pictures and updated social media as the countdown progressed. With 3 seconds to go I started recording aniPhone video and what I saw and heard astounded me. You’ve seen it all before but being there was surreal.

First a plume of smoke, then the rocket rising, followed by fire below the rocket as it rises. About 10 seconds into the flight the noise of the launch reached us, the ground shook and the wind changed direction. The rocket rose majestically into the sky and in less than 2 minutes the rocket was traveling more than 1,300 mph! I followed the rocket for about 2 1/2 minutes as it rose out of sight.

The launch was a complete success! Soon it was back on the bus where, strangely, almost no one spoke as everyone was busy updating their social media accounts with their photos, videos, and stories. Meanwhile, at the hotel my wife and children enjoyed virtually the same view I did from the comfort of their third floor hotel balcony. Soon my family and I found ourselves together again at the Visitor Center gift shop where we loaded up on souvenirs before heading back to NJ. (Warning: resistance to space-related merchandise is low immediately following rocket launch!). Five hours later we were home and ready for school and work the next day. Our epic rocket launch journey had come to an end.

As great as all that was, perhaps the best part of the experience is the new friends I made along the way. I met fellow NASASocialite entrepreneur Elaine Hansen, whose new product Einstein in Box helps kids as young as 8 years old learn about science, technology, engineering, and math (STEM) in fun and exciting ways. I also met brilliant 13-year-old Griffin Eslinger, an 8th grader at Palmetto Scholars Academy in Charleston, South Carolina. Griffin designed and built a science experiment that will be conducted by the astronauts on ISS about the effect of microgravity on the oxidation of metals, research that some day may be useful for long duration human spaceflight.

Want to try NASA Social Yourself?

This was an amazing experience and I recommend it to everyone. If you’d like to participate in a NASA Social event, follow @NASASocial on Twitter and keep any eye out for announcements. Be sure to have an active presence on the major social media forums like Facebook, Twitter, LinkedIn, Instagram, and Flickr, but you won’t need thousands of followers for NASA to select you. I had less than a thousand across all my accounts combined. Instead, NASA emphasizes reaching audiences they otherwise would not have access to. What unique audience can you bring?