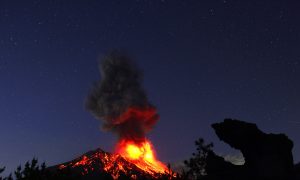 Robert F. Bukaty was born in Buffalo, N.Y., and studied photographic illustration at Rochester Institute of Technology. Bukaty has a reputation for making compelling images of ordinary every day life. Be it frozen curves of Mount Washington in New Hampshire or a barge plowing through arctic sea-smoke on its way out of Portland Harbor, Bukaty captured the moments in a visually breathtaking way.

In this selection, we see Bukaty focusing on the Northeast, tracing people interacting with nature in its rugged beauty. In his picture of Russell Norris, age 15, diving into the Swift River at Coos Canyon in Maine, you can almost feel the invigorating chills of the brisk water. And the simple photograph of a sign listing six different varieties of potatoes for sale outside a farm near Houlton may tell us more about Maine than a page of statistics.

On the other hand, his photo of a makeshift memorial for the victims of the Sandy Hook massacre in Newtown, Conn., or of Jack Fleming, one of the top men behind organizing the Boston Marathon, as he pauses at the finish line just a week after the terrorist attack, showcase photojournalism of the most serious kind.

Bukaty has worked for the Associated Press since 1993 and was part of the AP team that won the Pulitzer Prize in 1999 for coverage of the President Clinton impeachment story. His major assignments included the 9/11 terrorist attacks on New York City, Hurricane Katrina, the Boston Marathon bombing, and several presidential campaigns. In 2008 he had a special six-month assignment in Beijing, culminating with the summer Olympics, one of six Olympic Games that he has covered.

Associated Press contributed to this story.