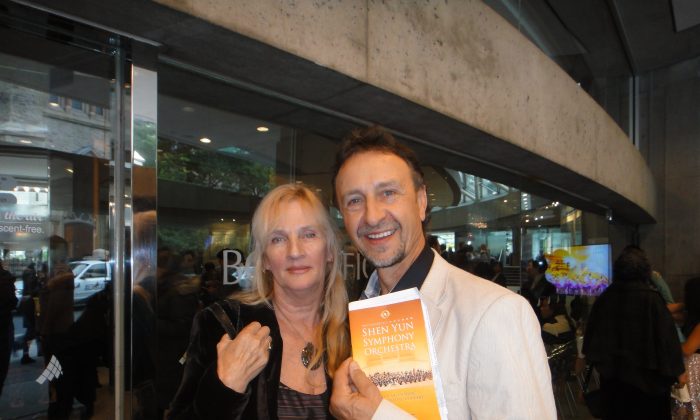 TORONTO—Musician Jan Hanko and his companion Jana, a guitarist and singer/songwriter, have lived music for much of their lives and continue to enrich Ontario with their musical charms. But on Saturday, it was their turn for a treat, and they got it from the Shen Yun Symphony Orchestra performance at Toronto’s Roy Thomson Hall.

The performance was uplifting, Jana said, and it was a treat that Hanko was grateful for.

“What I really like is how the low tones and the high tones amalgamate into one. It’s so beautiful and it’s something that as musicians we should pay more attention to because it is a chant and it’s healing. Very beautiful, Very beautiful,” said Jana.

Hanko, who plays string instruments and has been performing in the Toronto Mandolin Orchestra for 25 years, said the Shen Yun musicians and conductor performed flawlessly.

“There was a great mixture,” he added, pointing to the different instruments in the Shen Yun orchestra. “Everybody was well balanced.”

Jana said she enjoyed the performance so much that she wished it would last longer.

“I thought it was beautiful.”

The two shared enthusiastic assessments of “In a Village of the Hmong,” a piece inspired by the Hmong, a Chinese ethnic group, that has a composition marked with a staccato rhythm like horses galloping.

“I wanted it to go on forever,” said Jana.

“The galloping, the horses galloping to us, steps, it was beautiful,” said Hanko.

Jana added that the performance left her feeling refreshed.

“I took deep breaths through the whole thing. It was very cleansing.”