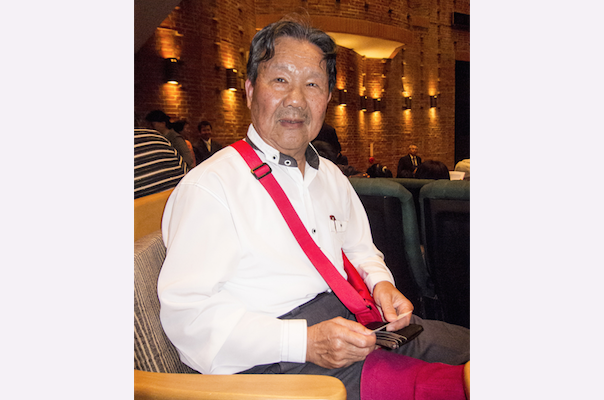 Mr. Hsieh felt the presence of the god of art in last year’s show, while this year he thought of Shen Yun’s perfection and beauty as the future source of human innovation.

Divine Dance and Holy Songs
Shen Yun audiences, including Mr. Hsieh, felt as if they were transported to a heavenly world. “Judging from the aesthetics I have learned, beauty like this is really hard to achieve. Aesthetics presented in the show will leave me awe-struck for a long time! I will think of it for a long time. It will linger long in my mind!”

Deeply impressed with the gorgeous colors and splendor, Mr. Hsieh said, “Of course, the stories depicted in the performance are flawless; also the color tones are well blended with the costumes; in particular, the level of the orchestra, whether musical harmony, balance or musical styles, techniques, or the director’s skills, is overall good!”

As a musician, Mr. Hsieh paid particular attention to the orchestral performance. He said, “The staccato played by the erhu (two stringed bowed fiddle) involves great difficulty—extremely beautiful! Also the trumpet perfectly integrates itself into the performance, each of her staccato notes being clear, very beautiful! Besides, the director did such a good job. It’s never easy!”

Thoroughly drawn to the show, Mr. Hsieh said, “Really beautiful! Ingenious! Particularly beautiful this year! Particularly ingenious! The artistic realm of Shen Yun is very, very beautiful. And what is the realm? You have to personally sense it!”

He added, “From the overall coordination, the whole structure of the orchestra, the fusion of, and harmonious presentation of, Western and Eastern instruments, and the dance skills, go further in this realm!”

Source of Innovation
Based on 5,000 years of Chinese civilization, Shen Yun triggers something in people. “As for innovation, something pops out of the brain after we absorb large amounts of something. Input comes before output. Now (the show) gives me lots of input. Each program deeply touches me. Whether dance, movements or the rhythm, it is very touching.”

Mr. Hsieh said, Shen Yun woke up the muse inside him, and that Shen Yun is the source of human innovation. “It’s like rubbing two stones against each other to produce sparks. After watching Shen Yun today, I come to have a flint in my hand, which has already lighted the flame. The flint is for lighting the flame, ‘the source of innovation!’”

Mr. Hsieh sensed the presence of the god of art in the show last year, this year he sensed something more. He recognized its influence was not limited to the god of art, but power from the divine. “I am a Christian. In my belief, an intellectual or artistic creation must come from a certain power, that is, divine power.”

Mr. Hsieh urged those who hadn’t watched Shen Yun to come to the show. “Come to watch Shen Yun, or it will be a pity, since it’s very beautiful. It’s hard to describe this kind of philosophical aesthetics. Come to watch it, and you will know what I mean.”

Shen Yun, based in New York, brings classical Chinese music and dance to the world in an effort to revitalize 5,000 years of civilization.

It was the third time Chang has seen Shen Yun. As Shen Yun has breakthroughs in its creativity all the time, she always feels it’s refreshing. “The show today is more creative. The combination of music, dance, and technology is so successful that it’s not only refreshing, but also kindles profound respect and deep admiration from people!”

“In general, the Chinese traditional costumes and the so-called traditional culture are stereotyped as old thoughts for us. But in the show, first, the colors are brilliant, and second, the costume design and modeling are fantastic. On the creativity of colors and costumes, the design manifests a kind of free, moving, colorful, and forceful inner beauty,” Chang explicated.

“These are done with painstaking effort, and designed wholeheartedly. They are ingenious and creatively designed. So people can find everything in the show fresh and new. It is its greatest feature. It’s really fascinating!”

Chang stressed that the most valuable for the show is that it can convey the divinely-inspired traditional Chinese culture to modern audience’s hearts. “Shen Yun brings the 5,000 years of divinely-inspired culture into full play and back to life. The stories are directed with the combination of music, dance, and technology, and all scenes are united very well. Though the dancers don’t talk, they fully portrayed their deepest inner feelings through their body language.”

What moved Chang most was the power of truthfulness, compassion and forbearance displayed in the show. She admired the spirit of bravery and fearlessness conveyed in Shen Yun, “especially when I saw the scene of ‘Truthfulness, Compassion and Forbearance,’ I felt that it’s the highest realm in humanity.”