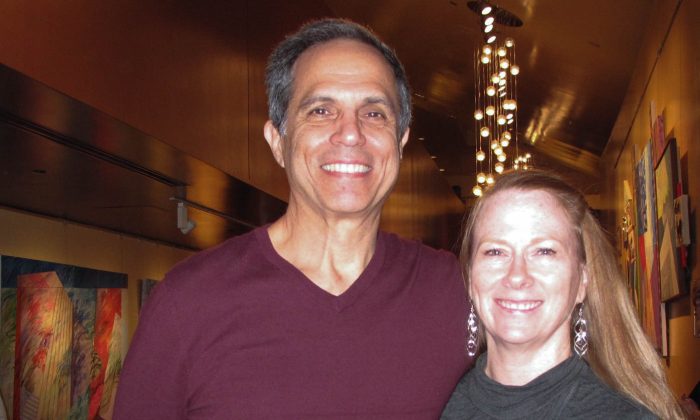 THOUSAND OAKS, Calif.—Vocalist, bandleader, and professional drummer Tom Mendola has been immersed in the world of music since he was 13. After refining his skills under the tutelage of renowned drum instructor Joe Cusatis, he performed professionally throughout New York and eventually moved to Los Angeles, and for the past nearly 30 years has performed with various notable musicians such as Sammy Davis, Jr., Issac Hayes, and Chaka Khan.

Mr. Mendola watched the sold-out performance of Shen Yun Performing Arts with his friend, Holly Scott, on March 22 at the Fred Kavli Theatre.

“I love it,” said Mr. Mendola. “I think it’s great. It’s well orchestrated, and I like the arrangements.”

Shen Yun is a New York-based classical Chinese dance and music company that tours worldwide each year to over 100 cities in 20 countries and five continents. In its tenth year of production, Shen Yun has reached millions.

From the beginning of the performance when audience members watch the curtain rise, they are presented with a colorful feast for the eyes—majestic scenes from ancient Chinese legends and heroic tales that have shaped its culture for thousands of years.

While Shen Yun mainly features classical Chinese dance along with folk and ethnic dances, each piece is accompanied by a full, live orchestra. Shen Yun Performing Arts Orchestra is unique in that it combines both Eastern and Western instruments—the Western orchestra provides the foundation, while the Chinese instruments lead the melodies. “The ensemble at once expresses both the grandeur of a Western orchestra and the distinct sensibilities of China’s 5,000-year-old civilization,” according to Shen Yun’s website.

Ms. Scott was drawn to the powerful, masculine movements of the male dancers.

“I love the guys; love the way they jump,” she said.

Shen Yun’s website elaborates on the expressive potential of classical Chinese dance: “The personalities and feelings of characters can be portrayed with unparalleled clarity. It is therefore capable of depicting scenes from any time period, whether ancient or modern, Eastern or Western, in a strikingly vivid way.”

“I think that their mission is noble,” Ms. Scott said. She noted that life seems hard for people in China in modern times, where there is so much toil and strife.

Another artist in the audience enjoying Shen Yun on March 22 was Donovan Marley. Mr. Marley was the artistic director for the Denver Center Theatre Company and the founder and artistic director of the Pacific Conservatory of the Performing Arts.

“I am fascinated by what I’m looking at,” he said. “It’s the visual splendor of it.”

Indeed, audience members the world over are struck by the richness of the production. In about 20 vignettes, they are swept away on a journey of 5,000 years of Chinese civilization. A digital, animated backdrop provides “a magical window to different realms,” according to Shen Yun’s website; and hundreds of handmade pieces compose Shen Yun’s brilliantly colored costumes.

“The characters, specific dance movements, props, lighting, the story being told, and even the particular notes played by the orchestra, as well as special audio effects” contribute to the sublime spectacle that is Shen Yun, according to the company website.

Mr. Marley added, “I have enjoyed it very much. The procedure is amazing and I saw culture we knew almost nothing about. So it’s interesting to see.”