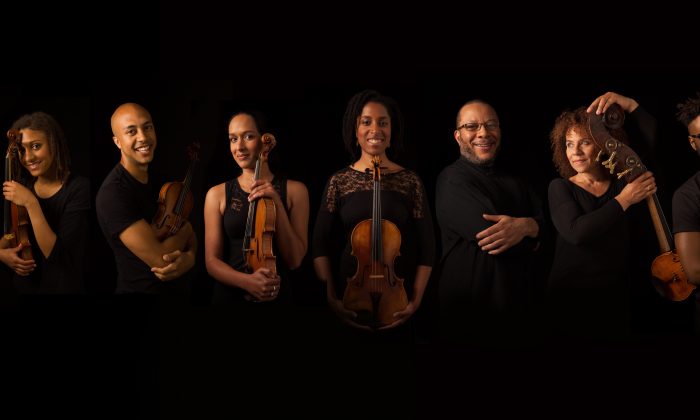 For British double bassist Chi-chi Nwanoku, classical music is fundamentally important to the soul and a treasure from humanity’s past that should belong to all people.

Having played with a number of prestigious European orchestras and ensembles, Nwanoku is considered one of the top double bass players today. She is the principal double bassist with the Orchestra of the Age of Enlightenment, a period instrument orchestra, which she co-founded almost 30 years ago.

She is also a recipient of the Member of the Order of the British Empire for Services to Music in the 2001 Queen’s Birthday Honors.

Nwanoku explained that classical music “is a medicine for the mind as much as it is for the heart and soul, healing that which no orthodox medicine can touch. … The way ‘harmony’ affected me is certainly the aspect of music that compelled me in the first place. At times during the worst grief of loss during my life, it was classical music that got me through.”

Nwanoku’s grief came at a young age. Training from age 7 as a sprinter, she had raced her way to the national level when a devastating knee injury forced her to give up that career.

The dimensions and contours that you find in classical music are immeasurable.
— Chi-chi Nwanoku, double bassist and founder of Chineke!

But through Nwanoku’s school years, she had simultaneously studied piano, and at the age of nearly 18, after the injury, she took up double bass. She studied at the Royal Academy of Music where she now teaches historical double bass.

Classical Music Is Good for Our Development

As a teacher, Nwanoku finds classical music incredibly important for students because it requires coordination of a person’s whole being.

“The way it connects you as a person, from your mind, your thoughts, your heart, your breathing, the coordination with your hands, your fingers, your eyes, and your pulse,” she said, “the dimensions and contours that you find in classical music are immeasurable.”

Classical music, more than possibly anything else, requires much of its performers. It is not mindless music; it contains structure and form, and requires discipline, thought, and consideration and study to play it, Nwanoku said.

In fact, scientific studies have proven that learning and playing classical music enhances brain function of both hemispheres, she noted.

Nwanoku believes this enhancement of the mind will translate into better life experiences for student players since the brain will be better developed.

Classical Music Can Help Us Today

If classical music is food that nourishes the soul, that food is grown organically; it is much closer to natural ways of doing things.

Nwanoku uses the example of rock music, which relies on electricity to produce amplification: “You’re already one step away from the natural, organic expression of music because you hardly touch [the instrument]. You plug it into an electric socket, and it makes sounds that you’re not really making.”

This idea extends to life as a whole. Technology has so accelerated our lives that we look for quick fixes for everything. She explained that we simply open up the refrigerator to eat, that we jump on a plane to travel. But what we gain in time, we lose elsewhere.

“You do not feel the land on your way, the contours, the shapes, and the differences as you would if you journey by road through countries.”

In playing classical music, on the other hand, age-old techniques must be mastered; each piece of music must be studied, digested, and interpreted. “Fortunately, there are no quick-fix shortcuts when playing a Beethoven symphony,” she said.

Classical Music Is for Everyone

Because classical music goes back for centuries, it has a deep history to share with us—regardless of whether the history and stories come from Europe, primarily. “It’s telling something, and it’s part of what we are as mankind,” said Nwanoku, who is of Irish and African heritage.

Nwanoku believes that if more people experienced classical music, they would see its value and would never want to be without it.

Nwanoku believes that if more people experienced classical music, they would see its value and would never want to be without it.

People flock to rock, reggae, hip-hop, and rap, she says, because it’s perceived as accessible. Whereas classical music has become marginalized because of the way it’s presented.

“People think, ‘I need to have a fine degree and a Ph.D. before I can understand it.’  We’ve made it an almost inaccessible realm in some ridiculous hierarchy where people think they cannot enjoy it unless they are from a higher class,” she said.

This perception is misguided. Mozart and Beethoven were poor people, working-class people, who relied on rich patrons for their incomes. In the end, they were thrown in paupers’ graves.

Moreover, common people enjoyed Mozart’s gavottes and minuets. “It was the pop music of the 18th century,” she said.

Given all of the benefits that may be derived from classical music, Nwanoku is trying to break through these kinds of stereotypes.

On the website of her latest foundation, she wrote: ‘I wish to change perceptions of who can and who can’t play classical music, and in turn bring about systematic change. It is absurd to live in a 21st century multicultural society in which certain cultural aspects are deemed to be only achievable, understood, and/or appreciated by a small segment of the community.”

Chineke! Aims to Broaden Your Mind About Classical Music

The Classics: Looking Back, Looking Forward

To that end she has founded Chineke! Orchestra, the first all black and minority ethnic orchestra (and junior orchestra), which successfully presented its inaugural concert on Sept. 13 at the Queen Elizabeth Hall, Southbank Centre, London.

“Classical music, I think, it’s an endangered art form. We have to fight to keep it and keep it in the lives of as many people as possible because it brings so much,” she said.

With Chineke! she is doing just that.