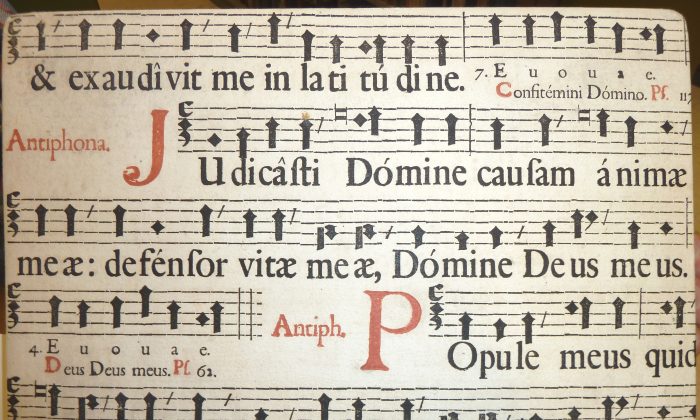 Music notation itself has changed from the early modern period to the present day. (Provenance Online Project/Flickr, CC BY 2.0)
Arts & Culture

Musical Literacy: A Skill of Some Note(s)

Earlier in 2015 a story ran in the U.K. press which revealed that it was Heather Mills who taught her daughter music, not her ex-husband, Sir Paul McCartney, because he cannot read music notation. McCartney and John Lennon left the job of notating their music for the Beatles to producer George Martin.

The news was received with frisson in some quarters, suggesting that a central goal of traditional music education, the ability to read music, was, self-evidently, unnecessary for a career, let alone a qualification, in music.

Given the ongoing threat to the funding of such music education in schools, it certainly gives us pause for thought.

Given the ongoing threat to the funding of such music education in schools, it certainly gives us pause for thought.

Should we teach music notation? Should the ability to read music be a prerequisite to take a music degree or, indeed, teach music?

This is much more than simply an academic question. After all, a specialist music teacher represents a significant investment by the state.

More Than Simply Notes on a Page?

Musical literacy is indeed no longer a prerequisite skill in many of the degree courses in music emerging at major Western universities. This is particularly true of courses that focus on popular musical genres and music production.

This shift reflects not so much the example of McCartney and others. Rather, technological advances in music production have all but obliterated the need for popular music to be transcribed into musical notation for it to be exchanged between producers, performers, and listeners.

Recall that it was not so long ago when the latest commercial musical hits could be bought as sheet music to be played at home on the piano or guitar. Sheet music may still be available today, but in the digital era, neither the creation nor the consumption of music demands mediation through a written score.

At the tertiary level, I suspect this emerging lack of confidence in music notation can also be traced to a broader, utopian urge to rid the world of old-fashioned hegemonic norms and institutional values.

The teaching of notation as a cornerstone of music education can appear to some as merely “just another brick in the wall,” as Pink Floyd would have it; a means of subsuming individual artistic freedom into predetermined patterns of thought.

We thus end up with a rather Orwellian notion educational idea that here, at least, ignorance is strength.

Preordained systems of communication like musical notation are inevitably normative, and thus potentially oppressive to the creative expression of individuals and minorities.

Music With a Purpose

The abolition of such norms has become, according to a recent essay by the great theorist of postmodernism Frederick Jameson, “a burning political issue,” often associated with “identity politics and the politics of secessionist groups and marginal or oppressed cultures.”

To be sure, musical notation is indeed a reductive system that inevitably shapes and limits what it attempts to describe.

But it still provides the most powerful means yet developed for turning the musical work into something preservable, transferable, and analyzable. It connects us to well over a millennium’s worth of historical music practice. Above all, it allows us to render music into objects of heightened critical contemplation.

Just as the printed word not only made it possible not just to preserve but also deconstruct and reflect upon the various ways we construct words to help give meaning to our world, musical notation gave us a similar capacity to reflect deeply on how music does the same.

Rather than being a utopian moment of artistic (and thus political) freedom, an emerging loss of confidence in notated musical culture might in fact foretell its very opposite: a loss of a particular type of imaginative, historical, and political capacity in our society.

Pianist Anton Smirnoff on His Passion for Playing and Teaching Music

As early as 1938, in the provocatively titled essay “On the Fetish-Character in Music and the Regression of Listening,” the German philosopher and social critic Theodor Adorno suggested what such a loss might mean in practice. The real dichotomy faced by Western musical culture, he thought, was not between “light” and “serious” music but rather “between music that was market-oriented and music that was not.”

A significant question the music critic must ask, then, is: to what extent is the music offering any resistance to its appropriation as a tool in social and economic domination?

Adorno was deeply distrusting of what he thought was the pseudo folk-culture around popular music. In his analysis, this ethos concealed a commercial imperative that was premised on manipulation and imposition of the populace from above.

Discover a Different World Behind the Music

United in Protest Against Horror in Syria

So the role of tertiary music institutions in preserving the forms and critical tools of musical culture is crucial. As musicologist Ian Pace wrote recently:

“[Tertiary music education should] provide arenas where it is possible to carry out intellectual and creative [and other] work, involving genuinely independent critical and self-critical thinking, in which few things are taken as read, everything is rigorously questioned on a regular basis, with a fair degree of autonomy from commercial or other external function.”

What might a world without a critical music culture look and sound like? Some commentators suggest we already know.

A good example might be found in Sam Smith’s “Writing’s on the Wall” (2015), the theme song for the latest Bond film. Heightened music production values cannot rescue incoherent lyrics and an unimaginative melodic and rhythmic design. It should flop, but it hasn’t.

We should be asking ourselves why this is the case.

Inbal Segev on Climbing the Mount Everest for Cellists

Surely our capacity to make such evaluative judgments depends in part on an educated musical populace. Music notation is a key tool in being able to turn mere opinion into forensic judgment.

Might an emerging lack of confidence in the educational centrality of music notation really be just another manifestation of the cultural logic of late capitalism?

Whatever we think, maybe educational debates like these should occasionally be couched at such a level. Questions like these, after all, are what higher education in the arts should be about. Questions about what it means to be rational agents in civil society, and what kinds of investments—educational and economic—we need to make to sustain such a society.

Oh, and just for the record, Lennon and McCartney may not have read music. But you can be quite sure that pretty much everyone else involved in the transfer of their musical ideas into monuments of world culture did.

Peter Tregear is an Australian-born musician and academic currently based in London, where he is a teaching fellow in music at Royal Holloway at the University of London. This article was previously published on TheConversation.com