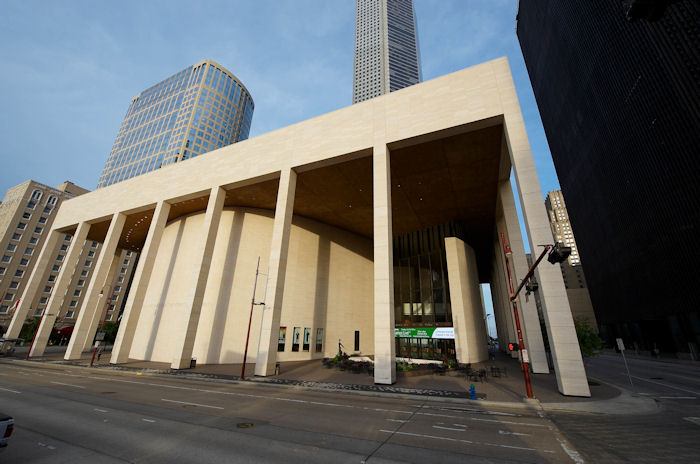 HOUSTON—Listening to the original music of Shen Yun Performing Arts was very enjoyable for music teachers Harry and Karen Blake.

“We enjoyed it very, very much,” said Harry Blake of the Shen Yun Orchestra. “The orchestration is very, very good.”

They appreciated unique sound the orchestra achieves by blending traditional Chinese instruments into the full ensemble of Western instruments.

“They did a fine job, very fine musicians,” said Mrs. Blake of the performers.

The Blakes teach music at Blinn College in Texas, which offers a two-year associate degree program. They saw Shen Yun Tuesday, Dec. 30 at Jones Hall for the Performing Arts.

Shen Yun performs classical and ethnic Chinese dance. Classical Chinese dance has been developed and systematized over thousands of years as it was passed down in royal courts and street theaters. It is now one of the most comprehensive dance forms in the world.

“Extremely enjoyable,” Mr. Blake said of the dance, noting that the dancers’ were able to communicate easily with the audience.

Behind the performers is a digital backdrop that sets the scenes for dance stories and musical pieces.

Mr. Blake said that the combination of dancers and the digital backdrop, “paints a very, very wonderful picture.”

He said he especially enjoyed the speed and quick footwork of piece Snow-Capped Celebration, a Tibetan dance done by male dances against a backdrop that depicts a grand palace high in the Himalayas.

Mrs. Blake liked the expressive power of the long, flowing, silk “water sleeves” worn by female dancers in the piece Sleeves of Grace. The motion of the sleeves hints at what the dancers are feeling.

She was also inspired by a piece from contemporary China about practitioners of the spiritual discipline Falun Dafa. The main principles of the practice are truth, compassion, and tolerance.

In the The Power of Compassion practitioners of Falun Dafa practice peacefully in a park. All of the sudden, the police show up to haul everyone away. This leads to an unexpected encounter between a policeman and a practitioner of Falun Gong.