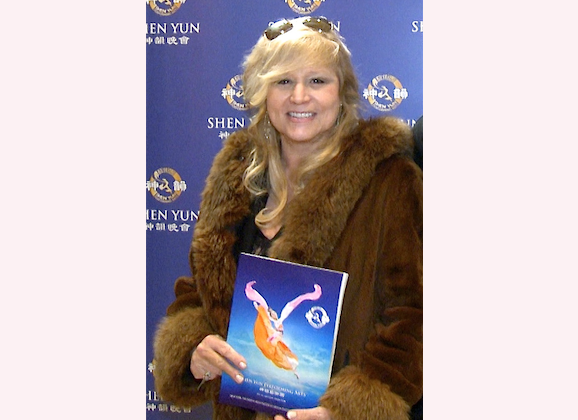 NEW YORK—Georgia Kaufman had the best kind of experience watching Shen Yun Performing Arts. The music school owner took in the unique music of Shen Yun’s orchestra, which melds classical Chinese instruments and classical Western instruments. She enjoyed the classical Chinese dance, one of the oldest and most comprehensive dance systems in the world. She beheld the digital backdrops. And the colors. And the vocalists. And the props.

But perhaps best of all, she took inspiration from the Thursday evening performance at Lincoln Center.

“I’m a music teacher, and watching the choreography—we do a recital each year, it’s not only a classical recital, but we also have some dance in it—and I was jotting down, if you look at the back of my program, a few ideas of things that I was witnessing,” she said.

Ms. Kaufman found multiple aspects of the performance a joy to watch. Her eyes moved from the dancers clothed in handmade, silk costumes to the percussion section of the orchestra. They would linger there, only to move to the Chinese instruments, which she was previously unfamiliar with. Then she’d glance at the digital backdrops. Then back to the dancers.

Particularly intriguing moments for Ms. Kaufman came when the dancers would interact with the state-of-the-art animated backdrop, by moving toward it and seemingly jumping into it, only to later jump back out. The near-perfect illusion is complimented by many audience members.

“The idea of the performers jumping into the back of the stage, I just thought it was spectacular,” she said.

The ancient Chinese culture presented by Shen Yun spans back 5,000 years and is rich with stories and legends from across dynasties and locales in the vast country.

The New-York based company presents these in less than 10 minutes each, recounting ancient myths, bygone heroes, or celestial paradises.

“Whether set in the past or in contemporary China, every dance embodies traditional Chinese values. Ideals of loyalty, filial piety, and veneration for the divine are cherished and celebrated,” explains the company’s website. “Heroes are extolled for their compassion and tolerance as much as their courage or determination when facing adversity.”

The dance pieces left Ms. Kaufman “very moved,” she said, adding that the mixture of tales from the culture and the several pieces that gave insight into the oppression in modern day China touched her heart.

She found the overall program a nice balance, moving between upbeat and happy to something a little more serious at times.

“Whoever designed the program did a sensational job,” she said. “But I especially liked the ending because it was an ending that gave us hope, and we should always have hope in our hearts, that the world will be a better place.”

The music in particular connected with her as a music teacher. She said the combination of both classical Chinese and Western instruments was brilliant.

And how did the music from the brilliant combination make her feel?

“It depended on the piece,” she said. “Some were melancholy and very thoughtful and others were invigorating! It was really beautiful. There are really no words to express—I don’t think beautiful says enough.”

“I don’t think anyone should miss it,” she added. “It was beautiful, I plan to come again next year, and tell all my friends about it.”