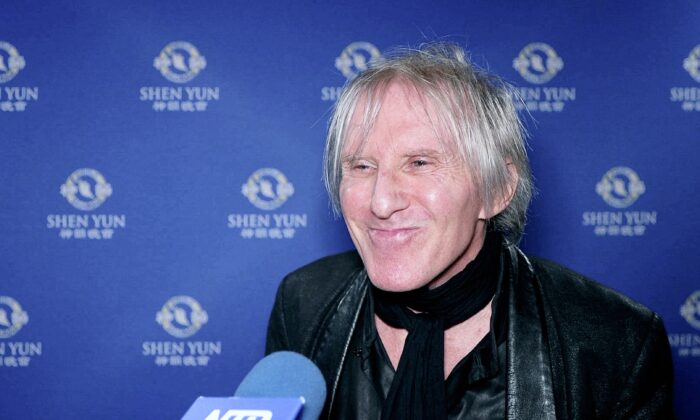 Jed Leiber at the Shen Yun Performing Arts performance at The Granada Theatre, Santa Barbara, on May 28, 2022. (NTD)

SANTA BARBARA, Calif.—Shen Yun Performing Arts is the kind of experience that is worth getting on an airplane for, said Jed Leiber, CEO of NightBird Music, who shared that the journey he made to experience Shen Yun at Santa Barbara’s The Granada Theatre was a rewarding experience.

“I didn’t know what to expect, except that it was more than worth the flight and the drive to make it two minutes before the doors close. So I’m glad to be here,” said Mr. Leiber.

Mr. Leiber said he enjoyed the utilization of technology in New York-based Shen Yun. The company features a patented technology that allows for the interaction of animated projected backdrops with the dances on stage.

“The marriage of the … performance with technology was seamless,” said Mr. Leiber. “I don’t think I’ve ever seen anything quite as extraordinary, and I come from a place where I’ve seen a lot of musical theater in New York.”

Mr. Leiber praised the story-telling in Shen Yun through the dances, saying it’s a difficult feat to communicate a storyline through dance movements, something Shen Yun does masterfully.

“To see the stories told with movement alone, and convincingly, I thought was pretty special,” he said.

Shen Yun tells stories with a wide range of emotions but each dance carries the message of hope. Mr. Leiber shared that he understands the effort that goes into a production like this.

“There’s comedy in the production as well. So everything has the Yin and the Yang, everything has both, and I think to see that in one production is quite remarkable and must have taken a whole lot of rehearsals because that’s usually my job,” he said.

He added that he enjoyed seeing Shen Yun explore themes that some shy away from. Shen Yun features pieces that show contemporary China, and the persecution of spirituality by the Chinese communist regime.

“Kudos to the production for having the courage to speak up,” he said.

There was a lot of precision in the choreography, Mr. Leiber added, and meaning to the movements.

“I noticed things … as subtle as the hands of the dancers, and whoever did the choreography was so precise. The relaxation of the fingers and the hands meant something,” he said.

Mr. Leiber also marveled at the costumes in the performance which he described as “stunning,” praising the fabrics and all the colors.

“That was a treat,” he said. “What I saw almost rejuvenated my love for dance.”