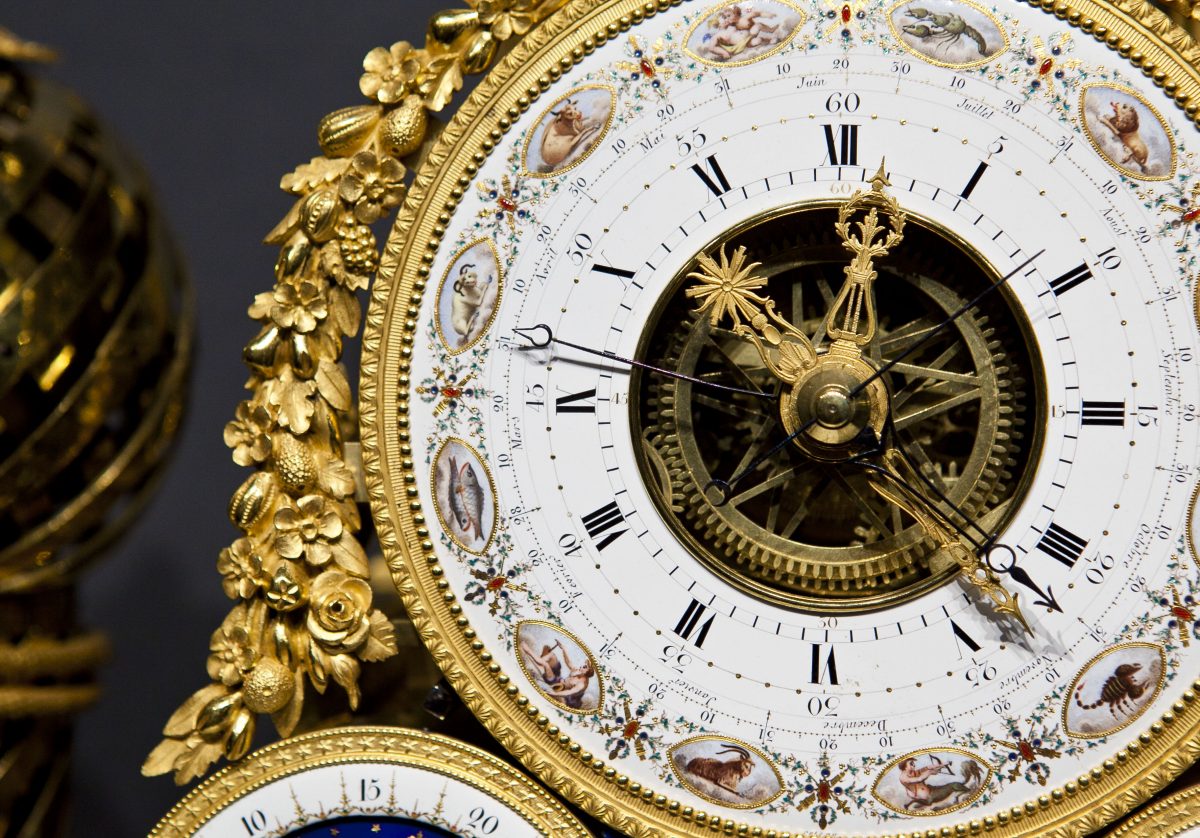 A detail from a clock worth at least $2 million from the display by Richard Redding Antiques LTD. (Samira Bouaou/Epoch Times)
Arts & Culture

As usual, magnificent museum-quality fine and decorative artworks can be found in abundance among the 65 exhibitors.

This year’s theme is “Downton Abbey meets Uptown chic.” Highlights within this theme include furniture, ceramics, and decór from the great houses of Britain.

From European and American arts, antique furniture, tribal arts, jewelry, and silverware to rare books, maps, and antiquities, there’s hardly an area of collecting that is not represented here.

For serious collectors and connoisseurs, the show is not only an opportunity to see, handle, and buy beautiful works of art but to pick the brains of knowledgeable experts. In 1989 the International Fine Art & Antique Dealers Show became the first show to introduce the concept of vetting art objects to the U.S. antiques market.

If you saw the Frick Collection’s current exhibits, two exhibitors’ booths will give you déjà vu.

The Frick is the first institution to show David’s work outside of France. You’d think that Yates is taking advantage of the exhibit to drum up business, but you’d be surprised—the longtime exhibitor has been a supplier of art objects to the Collection for three decades and has sold David sculptures at the show for years.

The booth of first-time exhibitor Richard Redding glitters with gilded clocks and candelabras from 18th and early 19th century France.

A large and highly decorated Hartmann clock stops visitors in their tracks. The timepiece, worth upwards of $2 million, tells the season, date, moon phase, world time zones, even the 12 zodiac signs. It was created for an 1801 exhibition at the Louvre and was hidden away in the walls of a noble family’s ballroom during wartime, Redding said.

This and any of the timepieces in Redding’s collection would look right at home in the Frick’s “Precision and Splendor” exhibit of watches and clocks. In fact, one piece from Redding’s personal collection is destined for the museum.

A Stroll Through Art History

What’s lovely about this show is how its manageable size contains its sheer breadth—65 exhibitors won’t be enough to wear you out, but you could go from Ancient Greek sculpture to 1950s American painting in a couple steps before weaving your way to Edo Japan or Mughal India.

At MacConnal-Mason, Dutch Romantic painter Petrus Van Schendel’s 1851 oil-on-panel painting “A Vegetable Market by Night, The Hague,” shows off his superb rendering of lamplight in the dark, something he is best known for.

In it, an orange lantern glows, breaking the moody grays and rich browns of an outdoor market. The light illuminates a lush pile of leafy greens and a platter of fresh fruit proffered to a pretty housewife.

New York-based Jerome V. Jacalone must have a sense of humor hanging this group of paintings together: a bunch of rowdy Italians with a cat that’s swaddled and clearly unhappy about it, the Holy Family with St. John, and Judith beheading Holofernes, bloody stump and all.

In this watery scene, the ducal palace is flooded at high tide (“alta marea,” as Enrico says), a common occurrence every two months or so. The palace’s marble columns are halfway submerged. Tiny people are stabilizing their boats, carrying the elderly out of the palace.

“There have been many paintings done of Venice and they are usually done in normal conditions,” he said. “I have never seen [a painting] like this in 40 years.”

Other marvelous things to see include Ancient Greek, Roman, and Egyptian art at Ariadne Galleries, tribal and ethnographic arts at Tambaran and Douglas Dawson, mind-bending maps at Daniel Crouch Rare Books, who this year is sharing its booth with newcomer PRPH Rare Books.