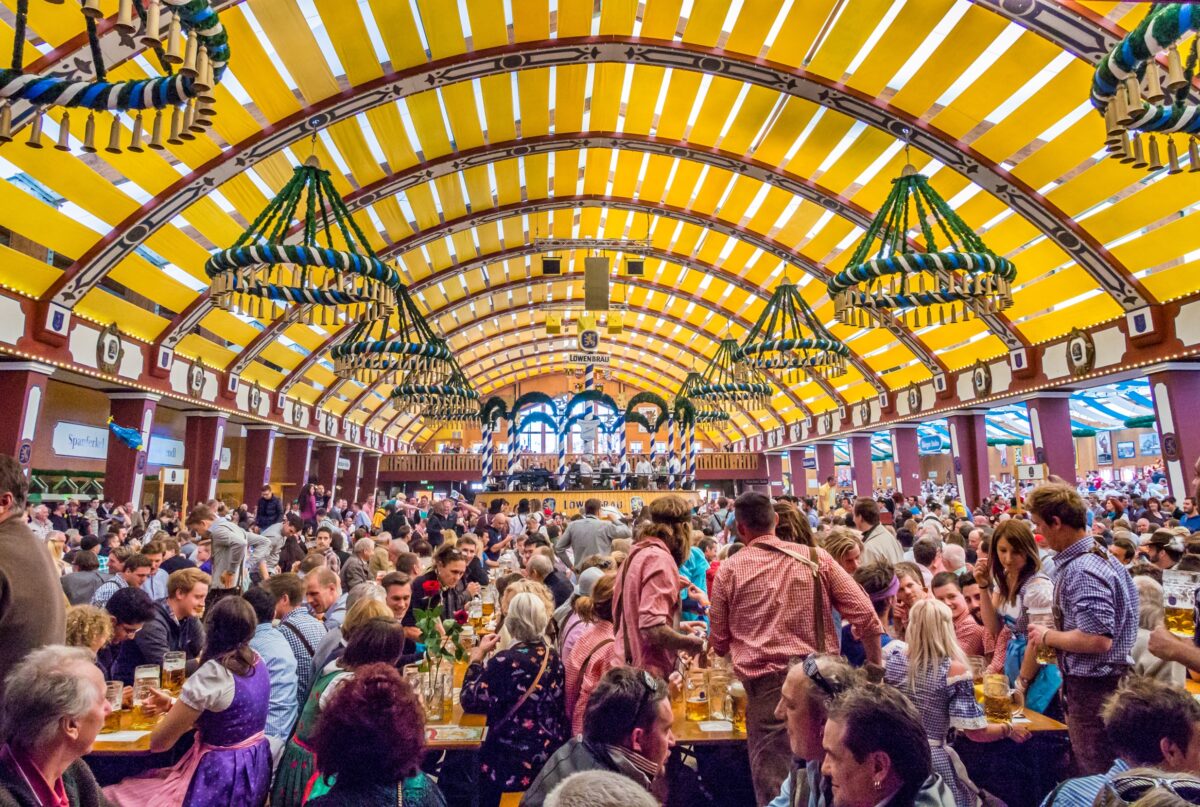 Beer halls are craziest during Oktoberfest, but you can go to one any time of year. (Takashi Images/Shutterstock)
Travel

Munich: Where Thirst Is Worse Than Homesickness

Heading for the Hofbräuhaus in Munich, I mention to my Bavarian friend, Friedrich, that I’d love to give this venerable beer hall some significance in my guidebook description. Unconvinced that “significance” is worth seeking at a beer hall, he quotes Freud: “Sometimes a cigar is just a cigar.” Stepping through its stubby stone arcade, we wade through the commotion of a thousand people — eating, drinking, yelling, and laughing — to the center of the cavernous hall.

The smoke-stained ceiling painting, repaired after WWII bomb damage, is an evocative mesh of 1950s German mod: Bavarian colors, cheery chestnuts, and old-time food, drink, and music. A slogan arcing across the ceiling above the oompah band reads, Durst ist schlimmer als Heimweh (“Thirst is worse than homesickness”). Friedrich explains: “Drink a beer, and you worry no more.”

Many of my most vivid, if still a bit fuzzy, Munich memories are set in beer halls. Locals always seem up for a visit. And for traditional Bavarian fun, nothing beats this scene, complete with rivers of beer, cheap food, noisy fun, and oompah music.

The music is loud. The musicians’ shiny lederhosen accentuate huge bellies, which in turn accentuate bird-like legs. With knowing smirks, they conduct a musical liturgy from the stage. The boisterous crowd rises to its feet in well-practiced unison for the beer hall anthem, “Eins, zwei, zuffa.” (“One, two, drink.”) This is followed by a ritual of clinking and drinking. The hefty glass mugs clink solidly, encouraging that very Teutonic sport of toasting.

Friedrich and I settle in at a long table and survey the chaos. Apart from the “under 35” party tour groups, it’s a three-generations-together scene. Kids build houses out of beer coasters while moms sip Radlers, a nearly dainty mix of beer and lemonade, and old-timers sport felt hats festooned with pins and feathers. Beer bellies, framed by leather lederhosen straps, seem to brag of a life joyfully lived.

Beer halls give you what you need. If you don’t have a partner, you can talk to yourself. One guy tries doggedly to hold his head up. His neighbor peers down at his spiral-carved radish as if he dropped a thought into it. Another man, with a mouthful of pretzel, really believes the band is following his dramatic conducting.

I ask Friedrich if they sell half-liters. He says, “This is a Biergarten, not a kindergarten.” Soon a busy beer maid brings us each the standard full Mass, or liter glass (about a quart, nearly what we’d call ein pitcher). She scurries between tables, plopping down dinners and garnishing them with mustard packets pulled from her cleavage. I look over at Friedrich. Finishing a giant swig from his giant beer and licking the foam from his upper lip, he says, “Only in Bavaria.”

Beer halls are craziest during Oktoberfest, but you can dance to raucous bands, munch massive pretzels, and hone your stein-hoisting skills any time of year. Munich has half a dozen beer gardens and beer halls — each featuring the lager of a local brewery and each with its committed following. I enjoy an arrival ritual of always taking a slow exploratory stroll of any new beer hall or garden. You’ll find children’s play areas, band stands, racks of personal mugs for regulars, a peek into the bustling kitchen, and historic posters and photos on the walls.

Beer halls always impress me with their long ranks of urinals. Often, life-size posters of dirndl-clad maidens are hung from high on the walls, pointing down and laughing at the men with their zippers down.

Watching the legions of happy beer-drinkers, it occurs to me that, unlike with wine, more money doesn’t get you a better beer. Beer is truly a people’s drink — and you’ll get the very best here in Munich. Each connoisseur has a favorite brew and doesn’t have to pay more to get it–they simply go to the beer hall that serves it.

Many beer halls have a big wooden keg out on display, but these days most draw beer from huge stainless-steel dispensers. If you’re at a beer hall that uses classic old wooden kegs, your evening comes with a happy soundtrack: Every few minutes you’ll hear a loud whop! as they tap a new keg. Hearing this, every German there knows they’re in for a good, fresh mug.

Gemütlich is the perfect word for Bavaria’s special coziness. It’s a knack for savoring the moment. A beer hall is a classic gemütlich scene. Spend an evening clinking mugs with new friends, immersed in this boisterous and belching Bavarian atmosphere. The warm and frothy memories are yours for the taking.

(Rick Steves (www.ricksteves.com) writes European guidebooks, hosts travel shows on public TV and radio, and organizes European tours. This article was adapted from his new book, For the Love of Europe. You can email Rick at rick@ricksteves.com and follow his blog on Facebook.)