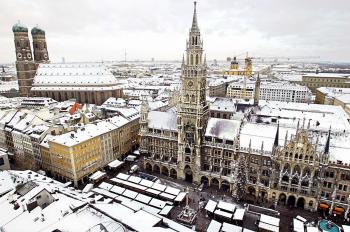 Dreaming of a White Christmas

By Philippa Rayment
Print
Sometimes, when the cold winds from the snow-covered Victorian Alps blow in to chill my bones, my thoughts turn to Munich at Christmas time – of snowflakes falling softly, music and laughter, good food, bright lights and a comfortable warm bed.

I remember it vividly … it is like a beautiful dream. I remember I looked with wonder at the landscape around me – the heaviest falls of snow for 10 years, I was told. At my son’s house, the tiny snow-covered back garden was a winter fairyland with the snow flakes softly falling. Looking through the dining room window, it was framed like a picture postcard. We built a snowman that afternoon, Nikki (aged 8 years) and I, and from then on, as we sat down to breakfast every morning, we watched his expression changing with the changing weather. Each morning, Nikki was taken to school and then my son and I would stop at a little village shop to buy bread (German bread is very nice), cheeses and some ham or pressed meat for breakfast.

Munich is an astonishingly vital city – flats jostle with tall modern office buildings, classical architecture, world class museums and wonderful parks. Because of the heavy snow falls, one day my son took us to a park nearby where there was a hill that was just right for tobogganing for little ones and beginners. On another occasion, on a particularly cold evening, we went to a farmers’ outside market – it was so cold that when we came back to the car, there were icicles not only on the outside of the car, but also on the inside.

There are so many things to do and see in Munich, but one thing not to be missed is to go to one of the world famous beer halls. Everyone is very friendly and the beer made in Bavaria is particularly good. It is made from a very old traditional recipe and contains no chemicals, and I am told that is why you do not get a hangover the next day.

Marienplatz is a square in the heart of the city and here is the main rail station (Hauptbahnhof) as well as the underground. Trains from here go to every major city in Germany. Marienplatz is also the social nexus of the city where the Neo-Gothic New Town Hall (Neues Rathaus), with its Glockenspiel chimes, displays jousting knights and barrel makers dancing. When the Neues Rathaus was rebuilt after World War II, the various coats of arms of the city were emblazoned along the top of the building with the notable exception of that of the Nazi swastika. The original symbol from which the swastika was appropriated, the srivatsa, is actually a 2000-year-old symbol for enlightenment that is found on Buddhas and enlightened beings. Its colour is gold. It is a very powerful symbol for good, but unfortunately Hitler took it as a Nazi symbol, changed it a little and made it black, so that it became synonymous as a symbol for evil.

Another “must do” in Munich is ice skating. It is free and is a very sociable exercise. At this time of the year, when sections of the Isar River ice over, the locals get out their ice skates. The young mothers come out to skate while pushing their babies in prams across the ice and chatting with each other. One part of the ice is cordoned off especially for ice hockey, which is a popular winter sport.

For skiing enthusiasts, the Zugspitze Mountain slopes in the Bavarian Alps are recommended. The Zugspitze is 2960m above sea level and is the tallest mountain peak in Germany, and it is about 40km from Munich. We went one weekend and the conditions were perfect – deep snow, no wind and bright sunshine. I decided to take it easy and was left sitting in the sun on a chair in the snow outside the rather austere café while my little family went off to the slopes. Later in the afternoon, I began to feel very cold. The sun was setting quickly and shadows were coming across the mountain. Most of the skiers had gathered their belongings and had clattered off the mountain via the chair lift. Looking anxiously up at the slopes, I could still see a few little people in the distance, but was unable to identify them. The ski slopes begin at 2650m and the only access to them is the chair lift. There was no one monitoring the chair lift and if you miss the last ride down, you would be in great trouble, as the terrain is very difficult lower down the mountain and not at all suitable for skiing. I didn’t fancy spending a night out up there, but much to my relief, the three enthusiastic skiers turned up – though last to get the chair lift, we arrived safely at the bottom.

That year on New Year’s Eve, just before midnight and in full moonlight, we clambered up a hill covered in deep snow to a vantage point overlooking Tegensee Lake, clutching our bags that contained fire crackers, glasses and several bottles of champagne. As the chimes of midnight struck, the whole lake was edged with light as little groups of people let off their supply of fire crackers … and the New Year arrived with all the hopes of a new beginning.

Echoes of the Nazi era still haunt Munich. The first Nazi concentration camp is just outside the city at Dachau. It remains as an historic site, as a lesson for the entire world. It opened in 1933 to house political prisoners and then in 1937 it was mainly used as a labour camp and for torture. Hitler used it as a model for the 3000 other concentration camps at different locations. It was also used as a training ground for SS officers.

As for the cars, Mercedes and BMW’s are everywhere; in fact, I don’t think I saw an old car. They all looked new, but most were dirty, for when the snow melted there was a lot of mud in the streets. The Germans have strict rules about pollution so you are not allowed to wash your car in the street, but have to take it to a car wash. During the winter, every day, every household has to shovel the snow away from their own front door, plus a section of the street, so that access is kept open in all of the suburbs.