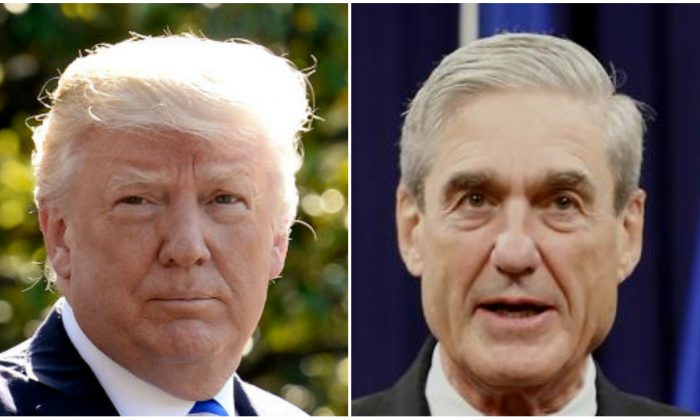 President Donald Trump walks towards Marine One while departing the White House in Washington, on May 17, 2017; Former FBI Director Robert Mueller during his farewell ceremony at the Justice Department in Washington, on Aug. 1, 2013. (Jonathan Ernst/Reuters/; Olivier Douliery/AFP/Getty Images)
Politics

Special Counsel Robert Mueller’s office on Jan. 18, said it was disputing a report from BuzzFeed News that claimed President Donald Trump had directed his former lawyer Michael Cohen to lie to Congress about the timing of talks for a Trump Tower project in Moscow.

“BuzzFeed’s description of specific statements to the Special Counsel’s Office, and characterization of documents and testimony obtained by this office, regarding Michael Cohen’s Congressional testimony are not accurate,” Peter Carr, a spokesman for Mueller’s office, said in a rare statement from the special counsel.

The BuzzFeed report cited two unnamed law enforcement sources, claiming that Cohen told investigators working for Mueller that Trump had directed him to lie about talks with a Russian official for a Moscow Trump Tower. The alleged lie was that talks fell through in January 2016 when they actually ended in June 2016, in order to be in line with Trump’s “disavowals of commercial and political ties” to Russia.

The BuzzFeed report claimed that Mueller’s office learned of Trump’s alleged instructions to Cohen through internal Trump Organization emails, witness interviews, text messages, and other documents, and that Cohen told prosecutors about the directive in an interview.

Mueller’s spokesman disputed portions of the BuzzFeed story that appeared to go to the heart of the allegations made against Trump.

It is the first time Mueller has commented about a news article concerning his probe of Russia’s alleged meddling in the 2016 presidential election.

I commend Bob Mueller’s office for correcting the BuzzFeed false story that Pres. Trump encouraged Cohen to lie. I ask the press to take heed that their hysterical desire to destroy this President has gone too far. They pursued this without critical analysis all day. #FAKENEWS

BuzzFeed editor-in-chief Ben Smith has since released a statement saying: “We stand by the reporting and the sources who informed it, and we urge the Special Counsel to make clear what he’s disputing.”

After the BuzzFeed report was published on Jan. 17, leading Democrats in the House of Representatives said they would seek to verify the story, saying that if true it would be evidence of criminal activity by the president.

The Washington Post reported that while Nancy Pelosi (D-Calif.) had so far “discouraged talk of impeachment” as Speaker of the House, “some senior Democrats said that if the BuzzFeed report is confirmed, Trump’s actions could rise to that level (impeachment).”

Now the DOJ must reveal the leakers of this false BuzzFeed story which the press and Democrats gleefully embraced. And maybe House Dems should wait to investigate until the Mueller report is filed. 4 have started already.There may be nothing to legitimately investigate.

The statement was exceptional given that Mueller’s team rarely comments about news reports.

“They are making a public comment to tell everyone to calm down,” David Weinstein, a former federal prosecutor, said. “He doesn’t want people to think his silence is confirming the truthfulness of the report.”

Trump said on Twitter on Dec. 13, that Cohen made up a story to get less prison time.

I never directed Michael Cohen to break the law. He was a lawyer and he is supposed to know the law. It is called “advice of counsel,” and a lawyer has great liability if a mistake is made. That is why they get paid. Despite that many campaign finance lawyers have strongly……

“Despite that many campaign finance lawyers have strongly stated that I did nothing wrong with respect to campaign finance laws, if they even apply, because this was not campaign finance. Cohen was guilty on many charges unrelated to me, but he plead to two campaign charges which were not criminal and of which he probably was not guilty even on a civil basis.”

The president added, “Those charges were just agreed to by him in order to embarrass the president and get a much-reduced prison sentence, which he did-including the fact that his family was temporarily let off the hook. As a lawyer, Michael has great liability to me!”

If the media does not spend — minute for minute — the same amount of time on the death of the latest #FakeNews from @BuzzFeed (RIP) that they did speculating about “IF IT’S TRUE 😱!” then they should quit even pretending to be unbiased. What a disgrace. #RIPbuzzfeed

Cohen is scheduled to begin a three-year prison sentence in March after he pleaded guilty to charges including but not limited to lying to Congress, campaign finance violations, and tax evasion. His least mentioned but toughest sentence was for crimes referred to as 2B1.1 in the sentencing guidelines (pdf), which include crimes like fraud, deceit, and embezzlement.

Kevin Corke, @FoxNews “Don’t forget, Michael Cohen has already been convicted of perjury and fraud, and as recently as this week, the Wall Street Journal has suggested that he may have stolen tens of thousands of dollars….” Lying to reduce his jail time! Watch father-in-law!

Cohen will be testifying to Senate Intelligence Committee investigators behind closed doors in February.

The Epoch Times reporters Ivan Pentchoukov and Petr Svab, and Reuters contributed to this report.