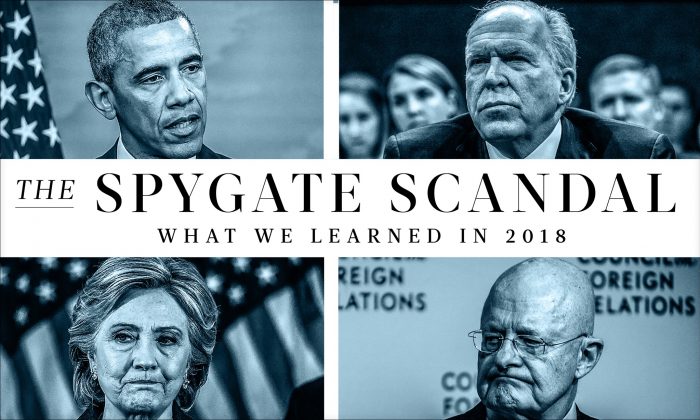 It is now clear that elements within the FBI, the CIA, the Department of Justice (DOJ), and the State Department were actively working against the Trump campaign, and that these elements continued to work against President Donald Trump’s administration following his surprise win.

Complicit in this effort was the mainstream media, which almost gleefully promoted story after story full of half-truths and partial facts.

But as we moved into the second half of 2017, the president continued to surprise and confound the opposition. His administration began to assert itself, and a semblance of control was exerted over the FBI and DOJ at the most senior levels.

In early 2018, a purge of sorts appears to have taken place; a number of high-profile individuals abruptly resigned or were fired. Former FBI Deputy Director Andrew McCabe was fired and is currently the subject of an ongoing grand jury investigation.

The investigation by special counsel Robert Mueller, which began in May 2017, began to return indictments, but has noticeably failed to produce any evidence of collusion on the part of the Trump campaign. Each indictment from Mueller has specifically noted there was no collusion on the part of any American citizen. The special counsel appears to be particularly focused on violations of the Foreign Agents Registration Act, and influence peddling under the Obama administration.

Looking forward into 2019, the questions become “who will be held accountable?”; “how high up the political ladder will the investigation go?”, and “will some of the more prominent players, such as former CIA Director John Brennan, become part of an investigative focus?”

The Mueller investigation has proven to be an emotional issue and a source of concern for many. But there are some potentially reassuring facts for those concerned the special counsel is acting out of bounds. Mueller’s investigation has exhibited a common theme: influence peddling and FARA violations. And the majority of his investigations, such as the one into Paul Manafort, relate to events preceding Trump. Thus far, there have been no allegations of collusion in any of the Mueller indictments relating to the president.

Not widely known is that Trump, Rosenstein, and Mueller met on May 17, 2017—one day prior to Mueller’s appointment. Ostensibly, the meeting was about whether Mueller would accept the role of FBI director, but this would seem to make little sense.

Mueller had previously served as the FBI director from 2001 to 2013—two years beyond the normal 10-year tenure for an FBI director. In 2011, Obama requested that Mueller stay on as FBI director for an additional two years, which required special approval from Congress. A new tenure would almost certainly have been opposed.

The May 17 appointment of Mueller accomplished one very significant thing: It shifted control of the Russia Investigation from the FBI and McCabe to Mueller. Rosenstein would retain ultimate authority over the probe, and any expansion of Mueller’s investigation required authorization from Rosenstein.

On Aug. 2, 2017, Rosenstein secretly issued Mueller a revised Scope of Investigation & Definition of Authority memo that remains heavily redacted. The full purpose of this Memo remains unknown and few have seen the unredacted version.

Two individuals who have seen the unredacted version are U.S. District Judge T.S. Ellis III, who presided over the trial of Manafort, and newly installed Acting Attorney General Matthew Whitaker.

Neither man has given any indication that there are any issues with the contents of Rosenstein’s memo.

As we move toward the year’s close, one final item worth noting remains:

The Steele dossier has been debunked.

Steele admitted in a recent court filing that he was hired for the purpose of providing information that would allow Hillary Clinton to challenge the validity of the 2016 election. Although a formal legal challenge was never mounted, the Steele dossier, which remains uncorroborated by the FBI, was used precisely for its intended purpose—including its role in obtaining a FISA warrant for spying on Trump campaign adviser Carter Page.

Michael Isikoff, the Yahoo News reporter who met with Steele in September 2016, recently admitted to having significant doubts regarding the dossier:

“When you actually get into the details of the Steele dossier, the specific allegations, we have not seen the evidence to support them, and, in fact, there’s good grounds to think that some of the more sensational allegations will never be proven and are likely false.”

Former FBI Director James Comey recently testified that the Steele dossier wasn’t verified as of May 2017. Again, the dossier was used as the primary piece of evidence by the FBI to obtain the Page FISA warrant on Oct. 21, 2016.

The Steele dossier, written by a British national and former MI6 agent, was used by both the FBI and the CIA, and a summary of the document was provided directly to President Barack Obama. And yet, for all the weight attached to this document, most of its assertions have never been proven to be factual, many have been proven to be false, and it remains unverified to this day.

Which is perhaps fitting for a document originally intended to be used by Clinton to challenge the election in the then-unlikely event she lost.