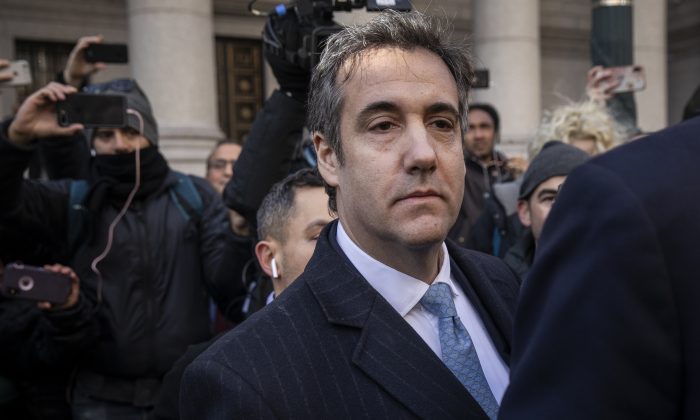 President Donald Trump accused his former lawyer, Michael Cohen, of lying to the special counsel investigators in order to get a more lenient sentence for his tax, fraud, and perjury crimes. Cohen should serve a full sentence for his crimes, the president wrote on Twitter on Dec. 3.

“You mean he can do all of the TERRIBLE, unrelated to Trump, things having to do with fraud, big loans, Taxis, etc., and not serve a long prison term?” Trump wrote. “He makes up stories to get a GREAT & ALREADY reduced deal for himself, and get his wife and father-in-law (who has the money?) off Scott Free. He lied for this outcome and should, in my opinion, serve a full and complete sentence.”

Cohen’s lawyers asked for a sentence of “time-served,” meaning no additional prison time, according to his Nov. 30 sentencing memo. The sentencing is scheduled on Dec. 12.

He is cooperating with special counsel Robert Mueller, who was tasked to investigate whether Trump’s campaign worked with Russia to sway the 2016 election. None of the eight charges against Cohen substantiate such an allegation and only the last two had to do with Trump at all.

Cohen confessed he was involved in paying hush money to two women that alleged past affairs with Trump. Because Trump’s presidential bid was part of the reason to pay the women, it could have been classified as campaign contributions, the prosecutors argued.

Cohen also pleaded he lied to Congress when he said the potential project to build Trump hotel in Moscow fell through in January 2016, when his talks to a Russian official about it actually ended in June 2016. Cohen said he lied to be in line with Trump’s “disavowals of commercial and political ties” to Russia.

Trump said on Nov. 29 that Cohen was “trying to get a much lesser prison sentence by making up a story.”

He said there was nothing wrong with building a hotel in Russia, but he ultimately nixed the idea to focus on his campaign.