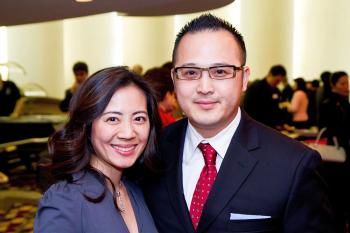 By Abraham Thompson
Print
SAN JOSE, Calif.—Recognized as one of “40 people under 40 to watch” by the San Jose Business Journal, Song Woo, President and founder of Lighthouse Management Group (LMG), brought his wife and mother-in-law to opening night of Shen Yun Performing Arts New York Company's three-day run at the San Jose Center for Performing Arts.

Shen Yun’s rich presentation of China’s 5,000 years of culture was all new for Mr. Woo, but for his wife and her mother-in-law, it offered a trip down memory lane.

The performance titled, The Monkey King Outwits Pigsy, depicting a scene from the epic Chinese novel, Journey to the West brought Mrs. Woo back to her childhood.

“The Monkey King dance was actually my wife’s favorite story as a child growing up because that’s what her mom would tell her and read to her. She already recognized the actual piece when they started to raise the curtains,” related Mr. Woo, who said for him, the piece was a good education.

The Silicon Valley rising star said he appreciated how Shen Yun combined dance with Chinese history, something he had never seen.

“I have seen other ethnic types of performances but nothing with the historical elements. The show has been pretty much developed over 5,000 years of Chinese culture so obviously the performances I’ve seen in other cultures don’t have that type of magnitude and history behind them,” he said.

Shen Yun incorporates a variety of themes into the overall performance. Some dances depict classic tales such as the “Monkey King;” others present folk dances from some of China’s ethnic groups. There are also world class operatic soloists, and a few scenes from modern China. Each is introduced by the show’s emcees to ensure audiences members get as much out of the experience as possible.

“It’s actually pretty moving, especially when they are describing the story behind each performance,” said Mr. Woo.

“But obviously as a performance, the dancers, the opera singers, are amazing,” he added.

The Shen Yun Performing Arts New York Company in San Jose includes two tenors, one contralto, and one Soprano. The singing is in Mandarin Chinese with English subtitles projected onto the backdrop.

The connection between the lyrics and traditional Chinese culture was also moving for Mr. Woo, just as Shen Yun’s program book states: “Our hope is that you will leave the theater today feeling uplifted and renewed.”

“It’s kind of funny. It’s very moving and emotional, because you’re kind of in tune with what’s going on and with the words, and meaning behind the music, so there’s also an emotional aspect to it as well,” said Mr. Woo. “So it’s pretty moving.”

“Life is very philosophical,” he said, still thinking about song. “You kind of reflect back and think, ‘Wow, yeah, you know you're right. In the life cycle, there’s life and there’s extinction and death, or whatever, it comes full circle.”

“As the story says, we do not despair, there’s afterlife … so do well,” concluded Mr. Woo.